B is for Baltic Sea

B is for Baltic Sea

Cruising round the Baltic Sea had been on my bucket list for ages. The confluence of a cruise itinerary on Cunard’s Queen Elizabeth, that arrived back to Southampton in time for  a same-day departure of the  westbound Transatlantic crossing on the Queen Mary 2, prompted me to go for it.

This cruise took us to Oslo in Norway and then bypassing Denmark, we visited Visby, on Sweden’s Gotland Island. Then we  entered the Gulf of Finland to visit Helsinki, before continuing to Russia for two nights in St Petersburg.

Calling in at Riga, Latvia and Klaipeda, Lithuania and Gdansk, Poland,  was of personal interest as two of my grandparents immigrated from these Baltic countries in the early 1900s. My genealogy studies way back (yes, yet another time consuming hobby of mine) focused on Lithuania, Latvia, and also Poland, from whence my other grandparents, and my husband’s grandfather came from.

The only downside of visiting a port on a cruise, is that in a couple of hours one can’t do more than scratch the surface of what you could see and learn.  But hey! its totally balanced by only having to unpack and pack once.

My highlights of this Baltic Cruise - St. Petersburg (more later), and my visit to the Ibsen Museum in Oslo. Ibsen’s play "An Enemy of the People” is my favourite of his 12 plays that I studied. I also enjoyed walking  around the Seurasaari Island Open Air Museum in Helsinki with old wooden houses brought in from all over Finland to be preserved there.

Pictures are of the "I Was Really There" genre. At the Ibsen Museum, Walking along the ancient sea wall in Visby, and at the OPen Air Museum near Helsinki.

You can connect with me at gillian@reviewfromthehouse.com 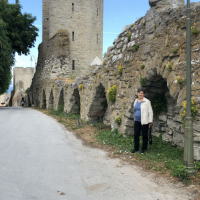 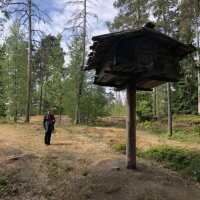