N: Nobody eats grubs and insects - or do they?

N: Nobody eats grubs and insects - or do they?

On our exploratory hike to the jungle camp (see J: Jungle Walk to the Kapok Camp) our guide cracked open a pod which contained a mass of grubs. He challenged us to eat one after telling us of the protective effect against gastrointestinal upsets.

Most of us were trying to keep from retching at the thought of eating a grub but as I mentioned in the earlier story, one brave soul chowed down the grub and did not later get the tummy upset that most others got.

That got me thinking about human entomophagy - the consumption of insects.

According to a 2013 report from the Food and Agriculture Organization of the United Nations (FAO), insects form part of the traditional diet of more than 2 billion people worldwide.  Most commonly consumed are beetles (31%), caterpillars (18%) and bees, wasps and ants (14%). Next in frequency - grasshoppers, locusts and crickets (13%) and so on.

I bet as you many of are reading this your instinctive response is "YUK!" or something along those lines. I know my stomach acids started churning at the mere thought of eating a cockroach, regardless of whether it's floured, spiced and deep fried.

However, insect eating is becoming fashionable on the menus of some fine dining establishments. Insect Europe has a list of restaurants around the world that have some form of insect dish on the menu.

Touted as an easily produced highly sustainable source of protein to feed the world's hungry, and the world's avant-garde diners - is the cricket!  There are several companies starting up in North America with ahead-of-the-curve entrepreneurs, marketing snack foods from crickets.

Bitty makes a proprietary cricket flour called  Bitty Flour, which is the base for their chocolate chip, chocolate cardoman and orange ginger cookies.

The website of Chirp cites its mission to be America's first producer of edible sustainably grown insects. Six Foods motto is that they believe six legs are better than four and they will make healthy, delicious and sustainable foods from insects.

Sorry, I just can't wrap my head - or my tortilla - around the idea of eating crickets, ants or wasps. Give me cashews, almonds or walnuts every time. 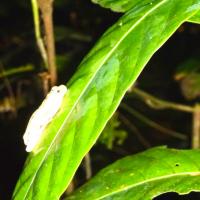