Who's afraid of T.L.I.F? A Back Story 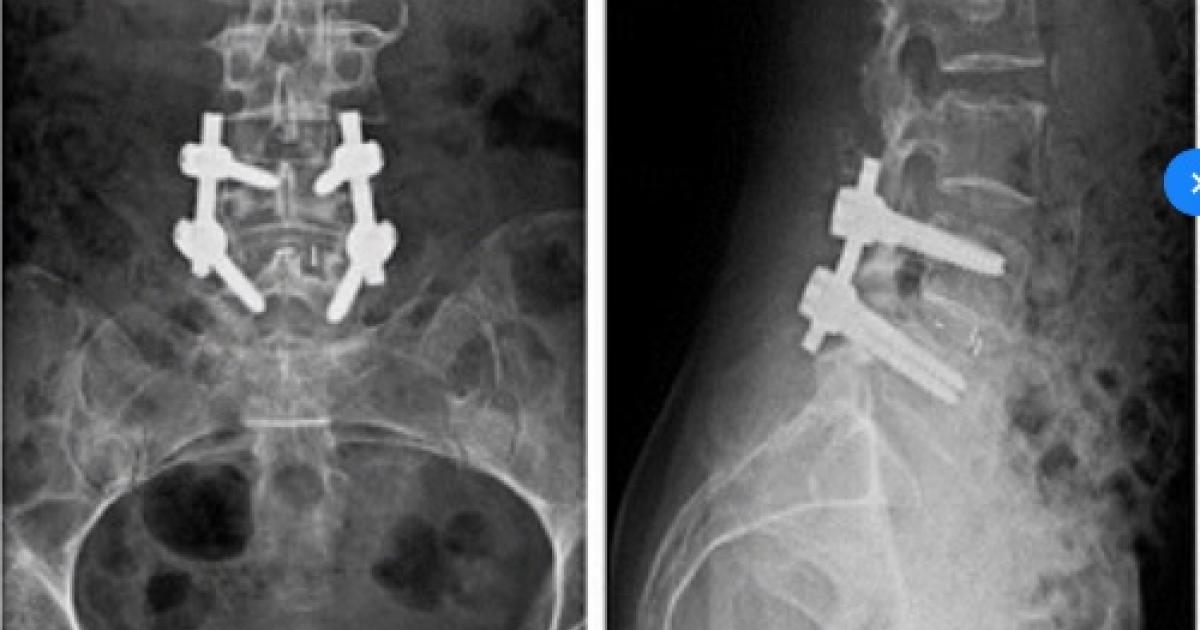 Who's afraid of T.L.I.F? A Back Story

Ok probably not a good joke to make right now when I am 5 days post spine surgery - but I am a little sad at having missed Blackbird Theatre's Who's Afraid of Virginia Woolf: My guest reviewer saw it in my place. And I can never resist a little word play.

T.L.I.F stands for Transforaminal Lumbar Interbody Fusion and according to my Discharge Summary, that's the procedure that I had last Friday at VGH.

My regular readers know about the excruciating sciatic pain that came on after my return from my latest ballroom dancing cruise and New York visit.  After two months of being incommunicado from chronic pain, I described what had happened in Listen To Your Body - Especially when it screams.

I was bombarded with great advice from all sources; it seems like everyone has a back pain problem that was fixed by acupuncture, chiropractic, physiotherapy, massage therapy; but most of all I was told to be patient and the pain would lessen with time. And lessen it did - a bit.

By mid-January I was walking enough to get my groceries and go to the drug store or the bank. Driving was bearable. And I was optimistic enough to write about Perfectionism, procrastination and pain .  I tried physiotherapy and Pilates and acupuncture - don't do chiropractic -  concentrated on strengthening myself by walking regularly, and got back into seeing some theatre and dining out.

I kept hearing that I was not "bad" enough for surgery - so I resigned myself to living with constant pain, and waiting for my referral to a neurologist, Dr. A. to come up. Instead of getting better things got worse and by the time I limped in to the neurologist's office on Tuesday I felt that lines of pain had permanently engraved themselves in my face.

After really listening to my story - and hearing  what I was saying - something that does not always necessarily happen,  and doing an examination, Dr. A. sent me off for a immediate CT scan to see what had changed since my October MRI.

And I took a taxi home and tried in vain to find a pain-free position to sit, stand or lie in. A little later I had a call from the neurologist.  He thought my appointment at the Spine Clinic for next week needed to be moved up urgently and was trying to arrange that. I asked if I should contact one of my kids to come in from New York, Toronto or California. He thought this would be a wise thing to do.

After this events moved fast. I had an 8  am appointment on Thursday to see one of the spine surgeons. Michael booked himself on a flight from New York arriving Wednesday morning - so he could come with me to the Clinic.

At the Clinic after repeating my story to Dr. B. and being assessed, we looked at the pictures together. Basically there was major compression of the nerves that was causing the excruciating pain. I am no radiologist but even I could see what he was pointing out.

Actually I did not need an X-Ray - my body was screaming to me - and it seemed that at last someone other than me could hear it too.

Before I could think anything other than "at last someone else can 'feel my pain' " - the hunt for a bed was on and I was on my way for an urgent MRI, chest X-ray, ECG and pre-op blood work.  I was introduced to Dr. C.  who would be performing the vertebral fusion and decompression  - and admitted to the Spine Unit in VGH's Centennial Pavilion.

I was scheduled second on the slate for Friday and told to alert the staff if my bladder or bowel stopped obeying me. Scary scary scary stuff!

Next day the morning seemed to drag interminably till the OR called for me to be sent down. I met Dr. D, the anesthesiologist - I thought I should be extra nice to her since she would be the last person I would chat to before going under but I could not think of anything clever to say.  While I was pondering profound thoughts they must have slipped something in my IV (okay no more bad jokes)  because the next thing I remember I was waking up on the ward.

I need to lie down for a bit now but just two points:

The next morning  about 12 hours after waking up from surgery, Kiwi physiotherapist, Hilary,  had me WALKING !!!!   I also had a new mantra - "nose over toes" to which I add " and up she goes".

And for the first time since September I HAD NO ELECTRICAL NERVE PAIN.