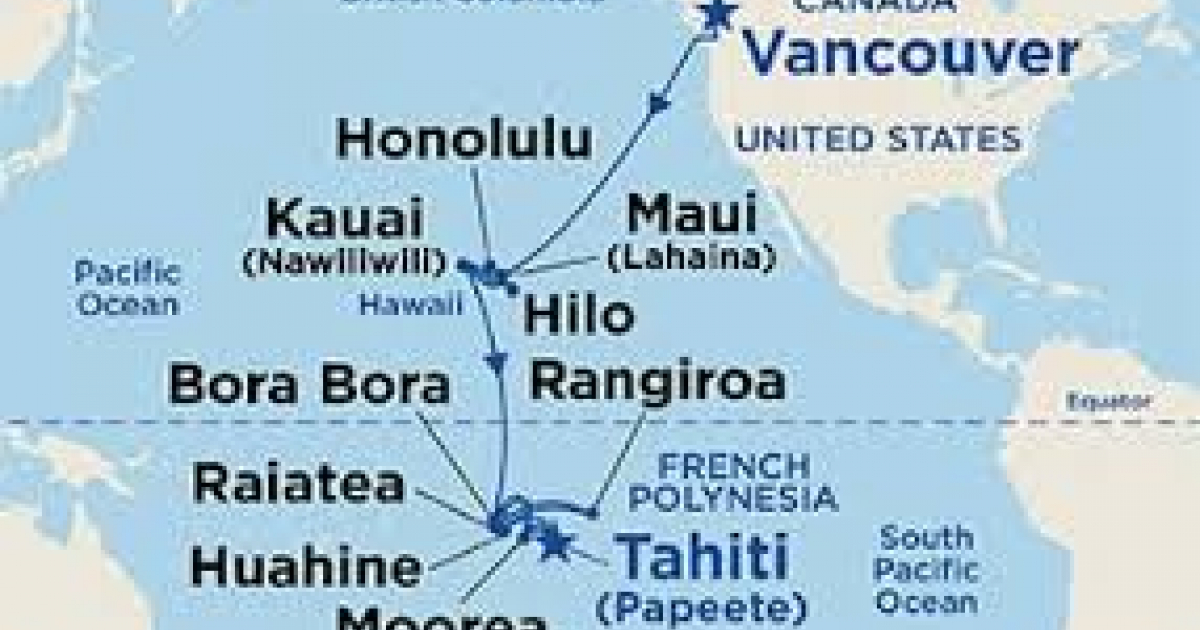 Two years ago I cruised from Honolulu to Tahiti with Dancers at Sea, on the Pacific Princess - South Pacific Dance Cruise.  To reverse the cruise that I did in November 2009, I decided to dance in the New Year of 2012, on board the Ocean Princess, this time journeying from Tahiti to Honolulu.

Rather than fly from Vancouver to Tahiti and then Honolulu to Vancouver, I opted for a return ticket to Honolulu where the cruise terminates, an overnight in Honolulu at each end ( so we can attend a dance in Hawaii at the end of our cruise), and a one-way flight from Honolulu to Papeete, to pick up the cruise.

The Air Canada flight to Honolulu was scheduled to leave at a convenient time – 2:30 and get into Honolulu early evening.

I had planned to do some work on the plane but ended up watching two movies that I had not had time to see in Vancouver. Footloose, with Julianne Hough who just lit up the floor in her stints as a pro on Dancing with the Stars, got my feet tapping which was probably good for my circulation after 4 hours of sitting in one place. My other choice was Moneyball, which I had heard good reports about.  One of the flight attendants commented to me that he was surprised to see so many women on the flight watching a movie about baseball – I pointed out that it was probably not because it was about baseball but because it starred Brad Pitt – but actually it is a really good story.

It ended up leaving a little late and it was already dark by the time we landed in Honolulu. There were a couple of women with placards drumming up business for shuttle buses to the various hotels. When I asked one of them  if they go to the Plaza Hotel she helpfully informed me that the hotel operated its own free shuttle and showed me where the courtesy phone was. I thought it was very nice of her.

On the other end of the courtesy phone the hotel clerk told me to exit the terminal and cross to the centre section in the ring road, find the green painted part of the curb where it said “permittee” and a shuttle bus would be along shortly. I waited perhaps 5 minutes and sure enough, the bus arrived to take about 5 of us to the hotel.

The Best Western Plaza Hotel is about a 5-minute drive from Honolulu International Airport so it is good if you want a place to stopover for the night. It is quite dated – the carpets in the corridors could do with replacement and the noise from the air-conditioner and the occasional plane meant I needed ear plugs to sleep - but the staff were friendly and efficient, the room was spacious, the water in the shower was hot and best of all – the wireless internet throughout the hotel was free and the connection was really fast.

The Plaza Café just off the reception area served dinner till 9 PM and I was quite hungry so I just dumped my stuff in the room, plugged in my laptop to charge the battery, and headed down to get some food.

I decided on a grilled steak and a house salad. The steak was cooked perfectly to a medium rare and was nicely flavoured. My good intentions went out the window though when I tasted the first of the pile of French fries on the plate, and though I restrained myself from finishing the lot I did consume- and relish – a goodly chunk of the fries.

When I got to my room one of the bedside lights was not working. I mentioned it at the front desk when I went down for supper and by the time I got back to my room a short while later, it had been fixed.

There is a two hour time difference between Vancouver and Hawaii so although it was only 10PM Hawaii time when I curled up in bed to read a bit before going to sleep, my body told me it was midnight, and I fell asleep almost at once. The bed was quite firm and comfortable and the pillows were just right. .

At check-in I had asked for a later checkout than the normal noontime, and was told that I could extend it to one with no extra charge. As my flight was only due to leave 4:35 the extra hour at the hotel was great. It gave me most of the morning to get things organized writing –wise and catch up with the planning I did not have time for before I left.

I woke at six and conscientiously did some stretching and back exercises before I decided to go down for an early breakfast. I had a great omelet, left the hash browns and toast.  I asked for a couple of little cream containers so I could make some coffee in my room, and went up to spend a productive couple of hours before I left to check out and take the shuttle to the airport.

My summary of the Plaza Hotel - I thought good value for the price, very convenient if you are just flying in and out of Honolulu- and I loooove the free wireless internet.

At the Hawaiian Air check in section I wasted some time standing in line before I was told that I should be in their next lobby, which was for international flight. The place is really not well marked. I think we are spoiled with our beautiful, well sign-posted airport in Vancouver.

For example, gate 32 which was our flight gate was actually in another terminal to which you had to take a shuttle bus but if you did not know that you could wander around looking for the gate number for ages.

Anyway by the time I had checked in I met up with three of the Dancers at Sea group who were on the same flight to Tahiti. One was Carrie, who has been a host for Wendy on several cruises that I have been on. The other was Loren who I met on the British Isles cruise, who was traveling with his daughter Nancy.

Later in the departure lounge I met Peggy, another DAS guest. There are supposed to be three others also on this flight but I don’t know them so could not figure out who among the hordes of passengers they could be.

The Hawaiian Airlines flight was absolutely packed-well not absolutely because the middle seat next to me was empty. They actually served a dinner though the baked chicken with a curries sort of gravy was pretty awful.  They were showing Larry Crowne, another movie I had n missed so I ended up watching that. Wow – three movies in two days is a record for me.

At Papeete the immigration and customs went really quickly and I was soon out of the arrivals area looking for the person who was to meet me. I had arranged with the hotel for a transfer from the airport.

The Intercontinental is about 5 minutes from the airport and by 11:30 I was checked in and in my room. There was a rudimentary room service still available so i settled for a ham and cheese panini, and was tucked up in bed by just around 1 PM. I fell asleep thinking about lagoons and swimming pools.