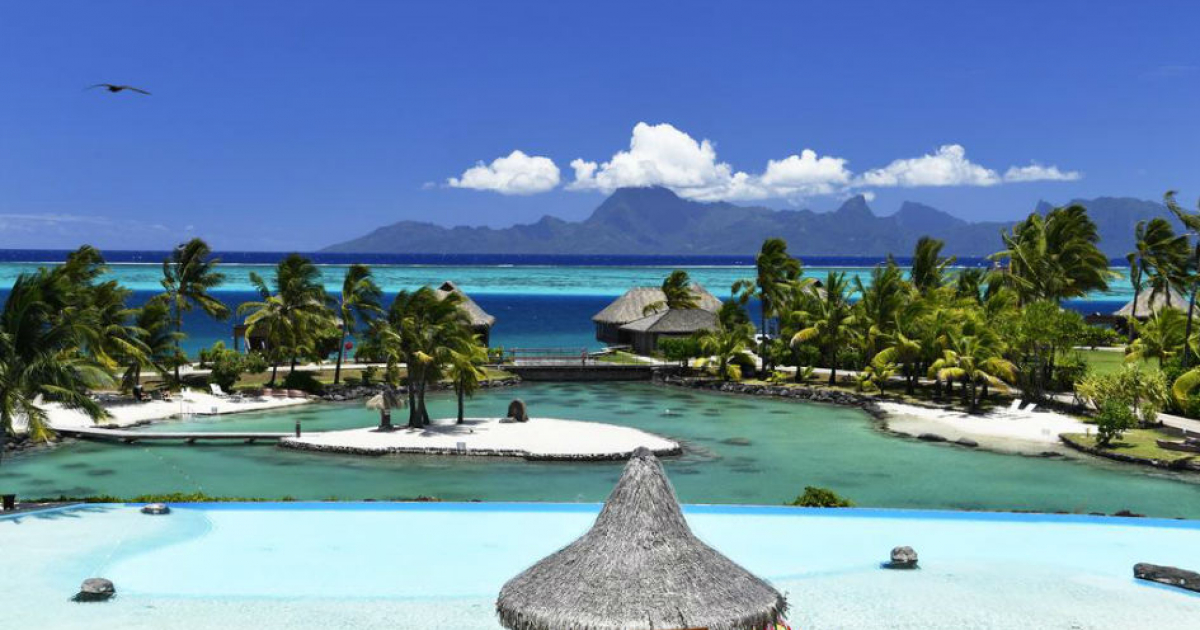 On my previous South Pacific Dance Cruise we journeyed from Hawaii to French Polynesia. I flew home from Papeete the day we docked in Tahiti and had no opportunity to see around the island. This time I planned to spend  a couple of days in Tahiti before boarding the Ocean Princess to sail in the reverse direction - Tahiti to Honolulu. This would give me time to actually see something of the island of Tahiti.

Since I would be spending Christmas and Boxing day in Tahiti,  I chose the stunning Intercontinental Resort in Tahiti as my base for a three night stay. My cabin mate for the cruise was flying into Papeete the day before the cruise. Another friend who is a specialist in tours to Italy, booked a couple of nights in a bed-and-breakfast in  Papeete, and we planned to explore the island together.

The InterContinental Tahiti Resort is situated alongside the lagoon  and looks out aross the water to the island of  Moorea. The resort has two restaurants, Le Lotus and Le Tiare, and three bars, the Tiki Bar, Le Lotus Swim-Up Bar and the Lobby Bar.  The Spa is called the Deep Nature Spa – but I don’t think I will have time to try it.

Le Lotus restaurant is located at the far end of the resort. It features cuisine from Chef Bruno Schmitt, formerly of three-Michelin star restaurant L’Auberge d’Ill in France. Le Tiare the main restaurant for breakfast and other meals, features a performance by Les Grands Ballets de Tahiti, the island’s internationally-renowned performance group. We had lunches and breakfast in Le Tiare and one sumptious dinner in Le Lotus.

I did not book one of those over-the-water huts but my room had a view of the lagoon.

The day after my arrival at the resort was Christmas Day. My friend Margaret cabbed in from Papeete to join me. We spent a relaxing day alongside the main pool, with many dips into the water which was just cool enough to be refreshing.

For lunch we decided against the huge Christmas buffet and opted for a la carte in Le Tiare where we could still see the show. This little clip  - TahitiDancers shows the incredible hip movements of the dancers. I think I would dislocate my back if I tried to  match them but I have been gingerly wiggling my hips - good preparation for the samba.

Margaret wisely chose a Polynesian specialty - poisson cru which is raw tuna marinated in coconut milk.  I tried it the next day and it was delicious. I picked the seared tuna which was described as  "seared  rare tuna". It was beautifully presented an a bed of balsamic onions and peppers but when I tasted it the tuna was so overcooked that I did something I rarely do. I asked the server to take it back and get me the seared rare tuna as described. The second attempt was distinctly better but still not as described in the menu.

After lunch we returned to the pool for some further hardship time, basking in the shade (the sun was tooooo strong) and dips and swims in the infinity pool.

In the evening we decided on dinner at Le Lotus. I had a glass of Sauvignon Blanc while Margaret went for the fruit juices - or was it the rum - and ordered a Mai Tai.

The restaurant is beautiful - we sat in the round circular section with tables at the railings. The sunset was  glorious as you can see in the picture from the previous post - and the ocean breeze was warm but refreshing.

We were presented with a n amuse bouche of salmon, and a choice of white or "nuts" bread. The latter was made from pecans. There was a bit of a language barrier so I am not sure if the actual flour was pecan flour or how pecans were used in the bun.  Anyway it was delicious and served with two olive oils - the one infused with vanilla and the other with ginger.

Between courses we were given a sorbet which I think our server  said was based on water cress, with a tiny oyster in the glass.

I decided on the foie gras appetizer. To follow I chose the sea bass with what was described as a slightly sour sauce that I think was soy based. Very delicious and the sea bass was cooked just right. Margaret chose the mahi mahi for her main course and also declared it delicious.

But the time our meal was over  it was quite dark.  We walked back to the main part of the hotel where Margaret took a cab back to town. We found out then that a cab ride from Papeete to the hotel was 1750 F before 8 PM but after that went up to 2900 till the morning.

My friend Carol was going to arrive later that evening. We had booked all three of us on a tour of Tahiti for the next day. As Carol's flight would not get in till 11 Pm, I figured an afternoon tour would be best.

The tour guide was going to fetch Margaret at her B&B in town and then come to pick us up so we said ciao and I went back to my room to catch up on some writing.