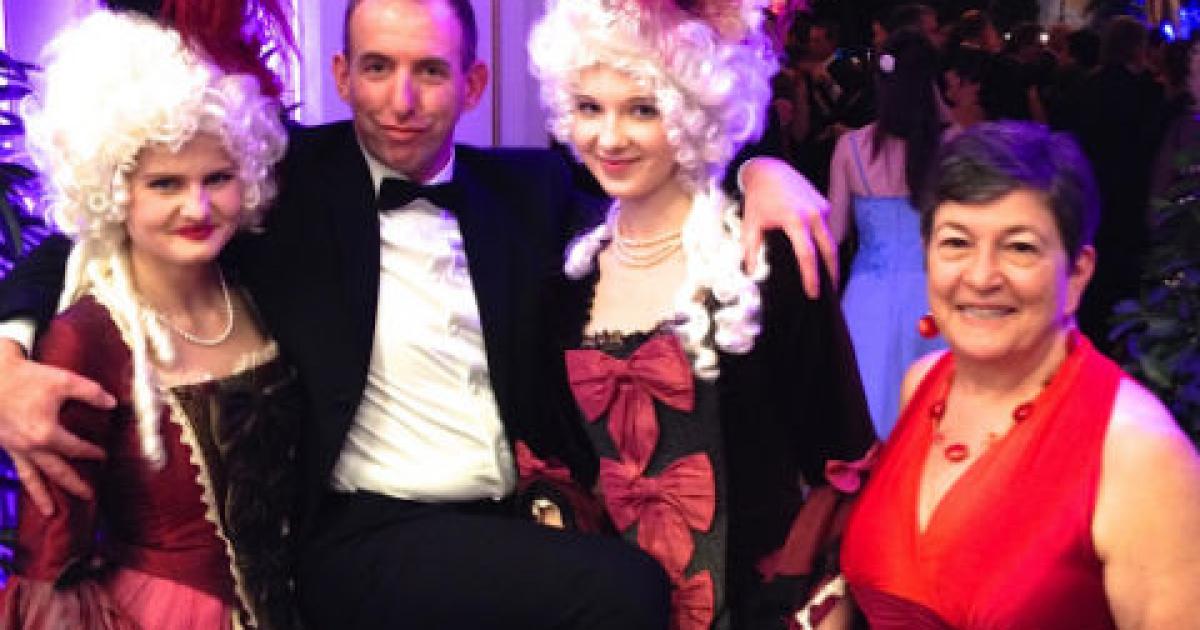 Situated where the Vienna Ring Boulevard touches the City Park, the Kursalon Wien was built in Italian Renaissance style between 1865 and 1867 and is quite beautiful. The first concert featuring Johann Strauss compositions took place in 1868. The Kursalon has four ballrooms located on two floors and a terrace with views out over the greenery of the City Park. The Strauss, Lehar and Schubert Halls are on the first floor while the Lanner Hall,  upstairs on the second floor, is the in-house concert hall.

For the Johann Strauss Ball the three first floor ballrooms were interconnected, with tables for the pre-ball dinner set up in both the side halls and the periphery of the centre hall. In the main centre ballroom the orchestra playing mainly Viennese waltzes, waltzes and the occasional polka, alternated with the band playing more Latin and swing music.

The Johann Strauss Ball was held the Saturday before our  Waltz Week classes started This was my first experience of a Viennese Ball and I did not know what to expect, other than suspecting that "dancing" would be difficult as the floor would be very very crowded. We had not yet met our local dance teacher-hosts, Axel and Sandra, and  had not the benefit of their local insight, knowledge and "survival techniques"  which they imparted later in the week. But I eagerly anticipated the experience of dancing in these beautiful ballrooms.

The evening started out with a "comedy of errors." We decided on an early supper around 6 PM at the S’Park restaurant in the Hilton, so that we could change into the ball attire and head on out to the Kursalon to meet the dance friend who had told me about Waltz Week, Marta, and her dance  partner Jim.

The local Waltz Week organizers had left our Strauss Ball tickets at the hotel for us, and we each picked up our ticket on check-in. While dressing for the evening, I retrieved my ticket from the safe in my room and laid it on my bed next to my dress. The thought crossed my mind that I should check with Robert that he had his ticket on him when we met in the lobby to catch a cab but my memory not being what it was, and with the kerfuffle with the cabs, I forgot.

I had been fussing with what to do about an evening bag as I did not want to be carrying one while dancing, and in the end I had decided that I would bring nothing but my hotel room key and some cash to buy water or drinks, and carry this on me.  Next decision was whether to bring a coat or not.  In the end I decided to bring my coat and leave it at the coat check. So then I transferred the key card and cash into the coat pocket, and off I went, feeling very dressy in my orange and red evening dress and orange Murano glass jewelry from Venice.

I met Robert in the foyer and we went out of the hotel to the taxi stand. Although it’s only about a 15 minute walk, it was really cold and we did not want to walk there in evening clothes. The first three taxi drivers flatly refused to take us to the Kursalon – it was too short a drive for them I guess but they pretended they did not know where it was. Robert, who is fluent in German understood what they were arguing about but even I got the gist of it. In the end a very pleasant driver, originally from Nigeria ended up driving us, and for his pains he ended up with a three euro tip on a fare of 7 euros. Not bad! I hope he went back and bragged to the others.

But the saga now gets funny. We had arranged to meet  Marta and Jim, inside. We walked up the ramp to the entrance,  and at the door I suddenly realized that the precious ticket, required for entry to the ball, was lying on my bed in the hotel.  How silly can one get?  There I had been thinking I should remind Robert about his ticket and I end up forgetting my own. So very apologetically I said that I had to dash back and get my ticket. Robert said he would wait at the entrance to meet Marta and Jim.

A cab was just pulling up to let people off so I hopped in and Robert explained in German to the cabbie that he should wait at the hotel to bring me straight back. Off we roared to the Hilton. I charged up to my room, grabbed the ticket and in less than ten minutes was back at the Kursalon. Another 10 euros gone but at least I had the ticket. As the cab pulled away Robert walked down to meet me. He said that the minute I left  in the cab, he realized that he did not have his ticket either. He had assumed that I had both the tickets for this ball and hadn’t realized that the envelope he was given at check-in had the ticket for this Ball. I couldn’t help laughing. How could two such hyper-organized people both manage such a feat?

Rather than  wait for another cab he decided it would be quicker for him just to speed-walk through the park back to the hotel. I went upstairs to the Lanner Hall where I had arranged to meet Marta, and Robert was soon back with his ticket. By that time it was nearly 9 PM when the opening ceremony was due to start.

A pre-ball dinner was served for those who had bought dinner tickets and essentially both the side halls and the periphery of the main salon were set up with tables.  Our tickets were just for the ball itself.

Although the doors were open at 7, the opening ceremonies were scheduled for 9:00. But there was no room in the packed ballroom so we ended up watching them on TV monitors from the foyer. Once they were over we were able to enter the hall for the First Waltz. In theory! In reality the floor was so crowded that significant movement was barely possible. Not even Robert’s expert floorcraft honed over years of dancing in different situations could prevent wildly uncontrolled couples from careening into us, and at times it felt like dodge-cars with elbows and bodies bumping and pushing from all sides. But after a few minutes of being bumped into, kicked and elbowed, I had quickly figured out for myself that my partner's experience in floorcraft would be trumped by the majority of the dancers who have none. So I just hoped my feet would not get stabbed by a stiletto heel and simply enjoyed the music in this beautiful ballroom in a building that was around 150 years old.

Later as the evening progressed the floor thinned out and it was possible to actually dance. In the main hall the orchestra that was playing the Viennese and slow waltzes, tango and foxtrots alternated with a band that played more Latin rhythms. We managed a tango and more waltzes and then found space on the periphery where we could chacha and salsa. We also dropped by the upper ballroom where the predominant music was a mix of Latin and swing.

We had pictures taken on the stairs by the official ball photographer. I have finally got to the stage when I can actually have a picture taken without shutting my eyes with the flash, and they turned out quite nicely.

I was still feeling the effects of the flight over and by midnight  we were all tired and ready to leave. I enjoyed the evening and looked forward to the IAEA Ball that would take place at the Imperial Palace the following Saturday. 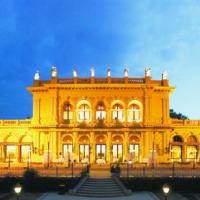 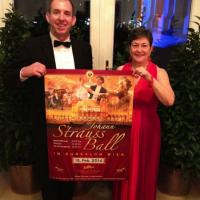 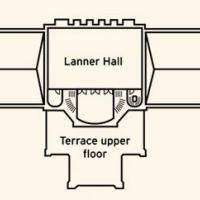 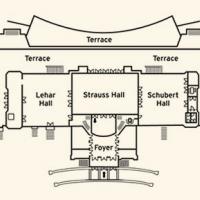 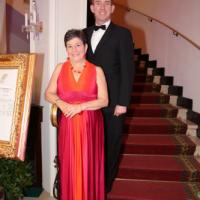 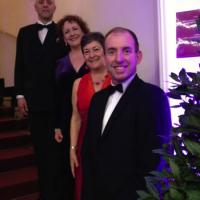 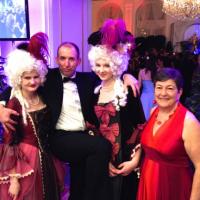