Destination: Las Vegas-downtown: Tales from the Plaza Hotel and Casino 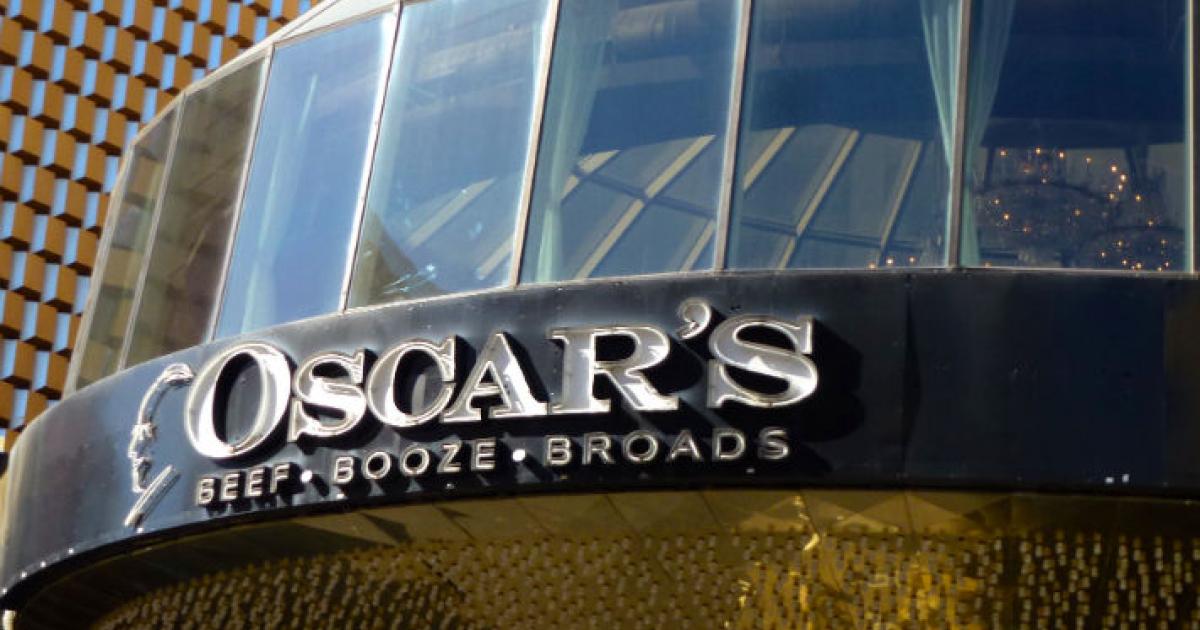 Destination: Las Vegas-downtown: Tales from the Plaza Hotel and Casino

Although like many travelers I love to indulge in the trappings of luxurious surroundings, I have been known to declaim smugly on several occasions that “all I really need is a clean comfortable bed, lots of hot water from the shower, a hair dryer, a toilet where I don’t need to squat, and a fast wireless internet”. During this week long stay at the Plaza Hotel I’ve realized that is not really true. My standards are higher than the basics and there are other minor niceties needed to make me a “happy camper.”

I have never ever stayed in a hotel that charged less than $40 a night (plus the “resort fee” of about 14.00) but hey! I thought, this is Las Vegas where high rollers stay for free in luxury suites bigger than my condo. I booked partly on-line but ended up having to talk to a reservation clerk who expounded on weekend rates, week rates and conference rates. I should have listened more carefully.

The Plaza Hotel is conveniently located at the intersection of Fremont Street and Main Street, in the downtown section of Las Vegas, about 2 miles north of the Strip.

From the statement I got when I checked out at 5 AM - before I had coffee - I paid the very low conference rate for two nights of the conference (it should have been three) and varying higher rates for the three nights before and two nights after the conference. In the end for a 7 night stay the mean room plus tax cost was $48 plus the daily resort fee. The resort fee got us a small bottle of water each every day and free wireless internet in the room.

We arrived at McCarran Airport around 6 PM on a Sunday evening, and the traffic during our cab ride from the airport was not too heavy. The lobby of the hotel, renovated in 2011, with marble and inlaid mosaic tiles looked fine. We were checked in speedily and efficiently by a pleasant desk clerk, and assigned a “quiet, non-smoking” room as requested. It had a great view south towards the Strip.

Our first inkling that the low room rate may reflect the ambience of the room came as we exited the elevator on our non-smoking floor. We passed room after room showing a no-smoking sign and came to a halt outside our room. No no-smoking sign on the door. We looked at each other perplexed. But the room did not smell of smoke so we figured out that the sign probably fell off and no one had bothered to replace it. We noticed a couple of other rooms on the floor also were missing the no-smoking signs.

The room was very spacious and there were two queen-size beds, that turned out to be clean and quite comfortable. The first criterion met. Tick! There were two bottles of water on the desk each day ( the small 8 oz or 1/4 L bottles) and free wireless internet in the rooms. For a blogger, a free good internet connection is a major priority, and we were pleased to find out on day one that the wireless connection in the room was fast and strong. We asked for an additional pillow each, and some extra clothes hangers and they were brought up promptly from housekeeping.

Tired and hungry we decided to leave our unpacking till later, and try out Oscar’s Steakhouse on the second floor of the hotel, where we enjoyed perfectly cooked steaks and other great food items as you can read in my review if you click the Oscar’s Steakhouse link. (Open it in another tab as you don’t want to miss reading about the other not-so-great surprises that came with a $48 room).

Comfortably fed, we returned to our room to unpack and settle in. There was a large sink, set in a counter top above the shelf where fresh towels were stowed. The space on either side of the sink to stand toiletries might be adequate for a single person but for two women sharing a room… NOT. The area was poorly lit, there was no makeup mirror, and my heart sank - no hair dryer attached to the wall.

Then I bent down to check under the sink and voila… hair dryer plus wall attachment - just not attached to the wall. Hmmmm…. Anyway I plugged it in to check and it worked. Check criterion three. Tick.

The bathroom was tiny, so small that if you aligned the bath mat on the floor next to the bath and then tried to close the door, the bathmat got all scrunched up. I switched on the bathroom light, which turned on the extractor fan, and we both nearly jumped out of our skins as it screeched like a kicked cat before settling into a loud hum. The next morning early, I made the mistake of flipping the bathroom light switch while my daughter was still asleep. She leapt out of bed in alarm to see what had happened to me. I had to reassure her that it was the extractor fan screeching not me.

I like to have my “stuff” organized in my room when I travel but there was a definite lack of drawer space to unpack into. We shared the three small drawers in the bureau - I hesitate to call it a "chest of drawers" - one and a half each. The other half of the bureau which could have housed three more drawers was an empty space- probably where an under counter fridge was supposed to go. No mini-bar! We asked about a fridge but we were told at the desk that the cost of getting a fridge in the room was $20 a night - that would have been another third of the cost of the room! We declined it.

The worktable was a reasonable size. Two laptops could be used there but although the room had two beds, there was only one chair. The air conditioner blasted frigid air that should have been great to cool the room, but it only reached the area of the desk. So you froze while seated at the desk but the rest of the room was barely cooled. Maybe that's why there was only one chair - you were supposed to work sitting on your bed.

A big plus was the number of electrical outlets in the room so you could charge multiple devices at the same time. I had brought with me a compact surge protector that could take three plugs. Wish I had that on some of my cruises where there were never enough outlets in the cabins.

Next morning I took a shower. The water was hot - tick for criterion two. The only problem was that the water pressure was so low it took forever to wash the shampoo out of my hair. Both the hot water and the low water pressure were consistent throughout our stay.

On one evening as we were getting ready to go out, the water stopped flowing from the sink tap. I had just seen the engineer go into the adjacent room so I wondered if he was working on a water issue. He confirmed that and said he would look at our sink when he was finished. We returned to our room after he had worked his magic. The water flowed again and for at least the following day the unpleasant miasma from  the sink drain disappeared.

Before we headed out the next morning to “Take a Bite of Las Vegas” we booted up our computers to check email. Whoops! The wireless connection that had worked so well the night before was down.  Checked with the front desk after they had assured us repeatedly for ten minutes that “your call is important to us, please continue to hold” and were told that the entire wireless internet was down and they were working on it. No problem - we were going out and we figured it would be working by the time we got back to the hotel that evening. Not so.

It was well after 6 PM when we got back to the hotel. No internet connection. We decided to stroll down Fremont street and find somewhere for dinner. Back in the room later that night, the first thing I did was boot up my computer. Nary a trace of a wireless signal. No point in checking with the desk. We decided instead to look for a TV show to watch. Taking the remote Alo pressed the power button. The TV switched on and a notice appeared on the screen welcoming us to the Plaza Hotel and telling us to press OK or SELECT to change channels.

The notice ended with "Good Luck". We thought that was an odd thing to say. But oops - a problem. There was neither an OK nor a SELECT button on the remote, and the ENTER button did not work. After some fiddling with the channels on the remote we finally found a food channel to watch but the signal was intermittently so fuzzy that it was like listening to an astronaut talking from outer space. By this time we were hysterical with laughter. We never did find out what happened to the restaurant staff who were stealing the donated food on the show but we had a nice long read in our beds before going to sleep. We figured out the Good Luck was probably for those who were going to make donations to the casino and not for those trying to work the remote.

Next morning- still no internet connection. Oh Oh I thought. This does not bode well for a hotel that is about to host a blogging conference. I went downstairs to talk to the desk clerk, who quite indifferently referred me to the manager. She in turn was quite pleasant and said she would waive the resort fee for the two days that there was no internet but on seeing that I was registered through the conference, she changed her mind. This was despite the fact that I was paying a full weekend rate for the days when no internet was available. Not a big deal - only 14 dollars - and we did get our small bottles of water (!) but symptomatic of the attitude of the desk staff, who with the exception of one of the male concierges and the friendly person who checked us in, were just… not rude or unpleasant… just indifferent.

One other thing. The walls are paper thin and there was a connecting door between our room and the adjacent side. One evening we were treated to sounds from the next room that would have been a great soundtrack for a movie like "Vicky Does Vegas".  Bring ear plugs!

Overall I was really disappointed. I really liked Oscar's Steakhouse. The coffee shop in the lobby made a great cup of coffee. We did not try the Hash House in the lobby because we were put off by the smoke smells from the casino.

But the rooms certainly do not live up to the blurb about newly renovated rooms on the website of the hotel. It gave me the impression that it was sort of unfinished. Someone just stopped caring. Missing door signs, unmounted hairdryers, poor air conditioning, a single chair. Despite meeting the basics of the clean comfortable bed, the hot water (but poor flow), the hairdryer and the internet that worked well when it worked, this place was definitely under par for a three star hotel. There are almost no hotels on my many travels about which I would say that I would probably not stay there again. This is a first. I would really like to see that these things have been acted on and fixed. 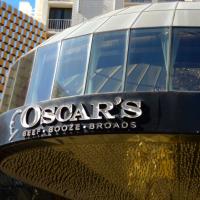 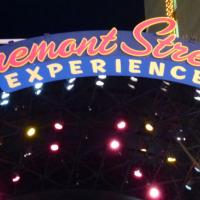 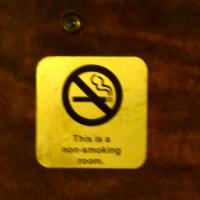 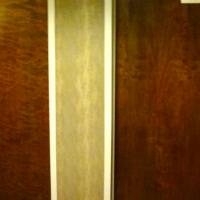 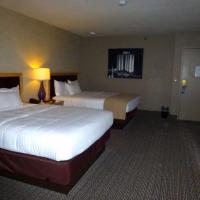 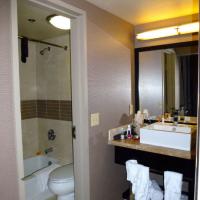 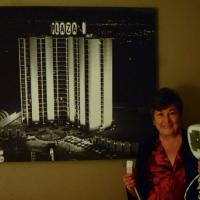 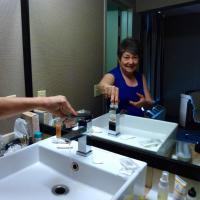 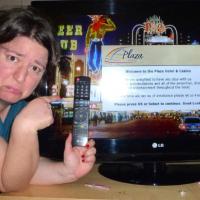 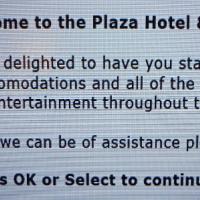 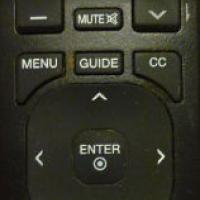