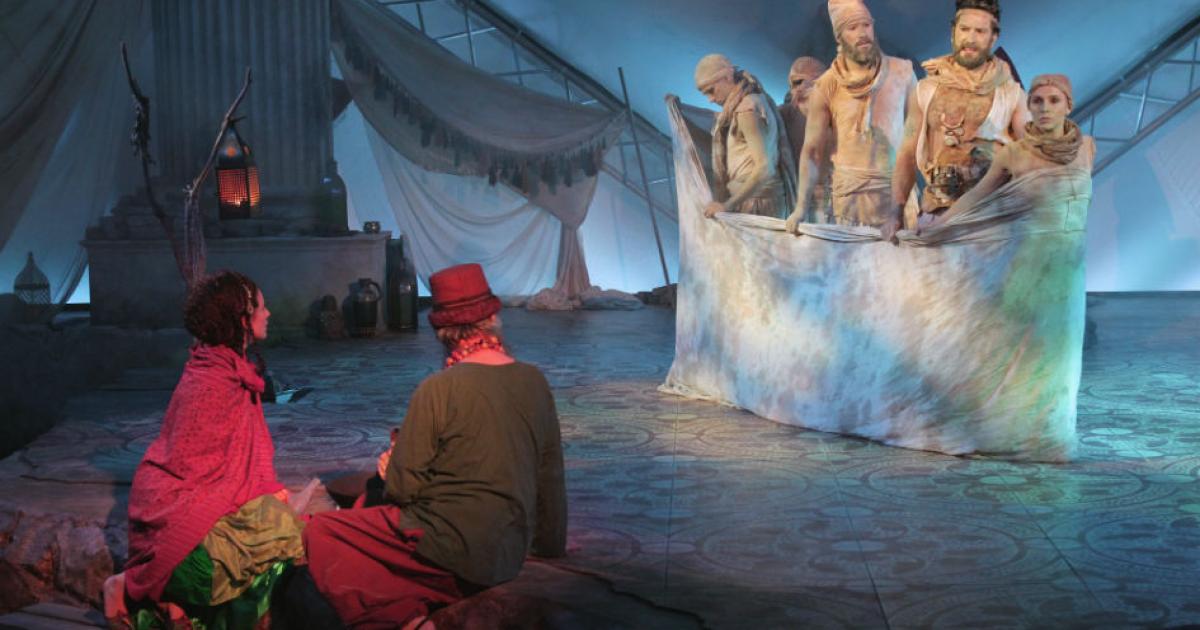 Vancouver, BC:  Pericles is one of the plays in the Shakespeare canon that has until now not made it to my list of "must read" Shakespeare plays. The first of the four romance or tragicomedic plays of the latter part of Shakespeare's career, (Pericles, Cymbeline, The Winter's Tale and The Tempest), Pericles introduces the theme of past injuries or injustices that are redeemed through magical or supernatural dramatic devices. The introduction to the text of Pericles, Prince of Tyre in The Norton Shakepeare states " On paper Pericles... has long seemed like the play from hell. Its plot is preposterous, its characters flat ...its style uneven... its authorship uncertain... Yet Pericles was one of the most popular plays of its time." Under the innovative and deft direction of Lois Anderson, this present day production of Pericles becomes magical and it becomes easy to understand how in production it could be so popular.

The story jumps back and forth in location and time from the Temple of Diana in Ephesus to earlier times and places. The play opens in the ruined Temple of Diana at Ephesus ( an ancient Greek city on the coast of modern day Turkey) where the healer, Cerimon (David Warburton) is creating medicines to heal an ailing King Pericles (Kamyar Pazandeh), who is on board a ship arriving at Ephesus. A young girl is brought by the pimp from the local brothel to apprentice with Cerimon and assist with the therapies. The girl asks what ails the king and Cerimon begins the tale of Pericles and his misadventures.

The story begins 15 years earlier when Pericles, Prince of Tyre (located in modern day Lebanon), sails off to Antioch, with the aim of solving a riddle set by the king Antiochus to block suitors for his daughter's hand.  If a suitor solves the riddle he gets to marry Antiochus's daughter, the princess. If not he gets his head chopped off. Pericles guesses the secret, that Antiochus and the princess are in an incestuous relationship, but  fearing that Antiochus will kill him he flees to Tarsus, an arid drought-stricken place. There he supplies the starving people with grain winning their gratitude and that of their  Governor, Cleon (Luc Roderique).

Unable to return to Tyre for fear of persecution by Antiochus, Pericles sends his advisor Helicanus (Luc Roderique) to Tyre to govern in his stead. Meanwhile sailing from Tarsus Pericles gets shipwrecked in Pentapolis where he jousts for the hand of Thaisa (Sereana Malani), the daughter of King Simonides (Ian Butcher). Thaisa and Pericles fall in love and marry and she conceives a child.

Learning that Antiochus is dead, Pericles sets out for Tyre by sea. While at sea Thaisa gives birth to a girl, Marina but dies in childbirth.  Her body is thrown overboard! Pericles returns to Tarsus and leaves Marina to be cared for by Governor Cleon and his wife Dionyza (Jeff Gladstone).

Time moves on and Marina has grown into a beautiful young girl. Dionyza has a daughter the same age as Marina and jealous that Marina's beauty obscures those around her, Dionyza orders the servant Leonine (Kayvon Kelly) to kill her but before he can do this, she is captured by pirates and sold to a brothel run by a nasty madam (Kayla Deorksen).  Leonine tells Dionyza she is dead.In the brothel, Marina miraculously remains pure, inspiring the clientele, including the Governor  of Mytilene, Lysimachus (Kavon Kelly) and the pimp Boult, (Ian Butcher) to spare her virginity. Boult brings her to Cerion at the Temple ...

Meanwhile back to Cerion in the Temple: we learn that Pericles went to Tarsus to find his daughter but was told she was dead. So sick at heart having not eaten or spoken for three months, he came to the Temple at Ephesus... and not wanting to spoil the revelations, I'll end the story here. Suffice it to say an extraordinary measure of suspended disbelief was needed to accept the surprise. In fact it was so improbable that the audience actually laughed out loud.

With all that, I loved it. The clever set design, the pure colours of the costumes and lighting combined to evoke a sense of the supernatural. Small pits with figurines around the stage designated the locales of Pericles' travels. Sheets were transformed into a ship,  a liquid potion was made dark then cleared. It was all so well done that the silliness of the story didn't matter. So ironically, though I enjoyed both of this year's productions of Romeo and Juliet, (how can one  not?) and Othello, an all time favorite of mine, I enjoyed the staging of Pericles the most.

Having wandered among the ruins of Ephesus and dined on calamari and fresh Greek salad in Mytilene on the island of Lesbos, I could not resist checking out Pericles' wanderings on this map. Ephesus is located near Izmir on the Turkish coast. Pericles started out from Tyre - in present day Lebanon. He sailed to Antioch now Antakya and to Tarsus, near Mersin, both on the Turkish Coast. Pentapolis means five cities, so I  couldn't figure out exactly where that was. But I'm sure it's a lot smoother sailing there on a cruise ship. 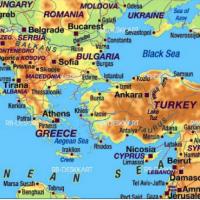 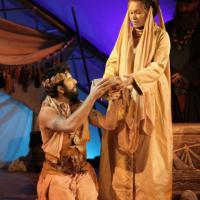 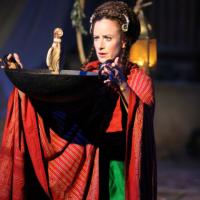 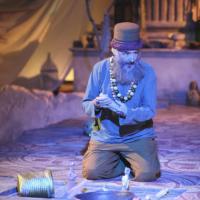