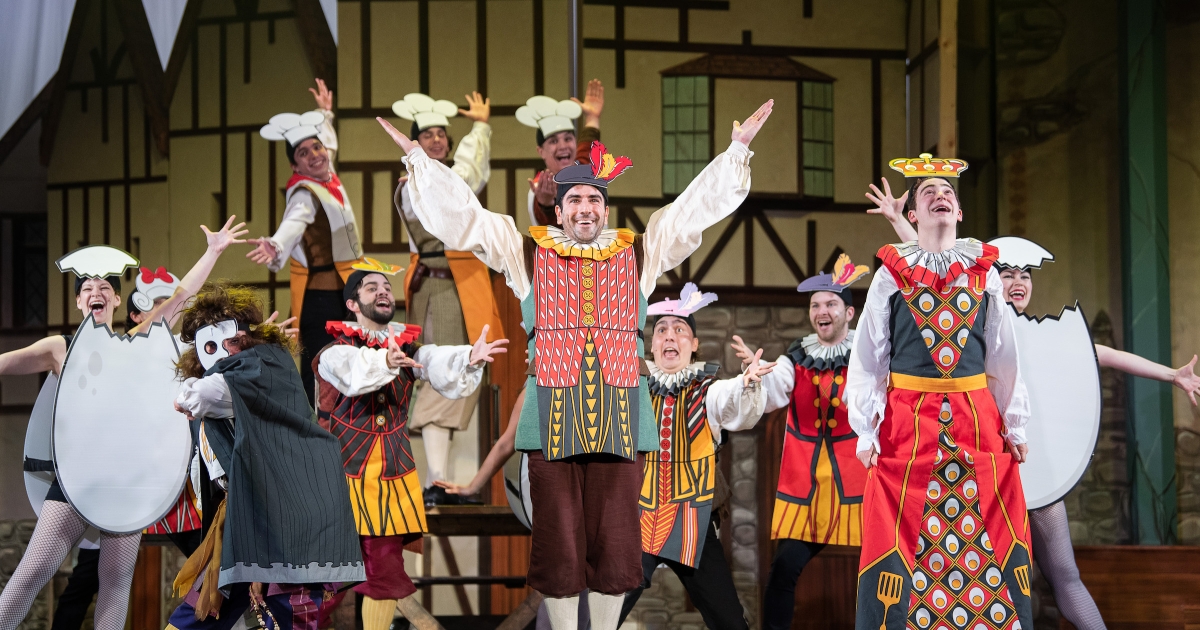 Vancouver, BC:  Did Theatre Under the Stars consult with Nostradamus' nephew to find the perfect night to open Something Rotten? After a rainy morning and a dubious afternoon, the sun came out by evening as TUTS returned to the Malkin Bowl stage after a 2 year hiatus. And just as sunshine makes me happy, the joyful energy of the singers, dancers and musicians made me want to leap out of my seat and dance. Luckily, my companion restrained me. Bottom line, so to speak, I loved the show.

In the opening number "Welcome to the Renaissance" the Minstrel (Laura Cowan) locates the setting in a South London street in 1595.  The Bard, William Shakespeare (Daniel Curalli) dominates the theatre scene, while the Bottom brothers, Nick (Kamyar Pazandeh) and Nigel (Vicente Sandoval) struggle to keep their troupe going.  Nick is wildly jealous of the Bard's success, and consults Nostradamus's "soothsayer" nephew (Jyla Robinson), who proposes that if they create a new form of theatre, where the actors sing instead of talk, they will beat The Bard. Unfortunately the soothsayer's vision was a bit blurry, so the musical they create is all about  - eggs! But thanks to Nick's obsession to create "Omelette",  musical theatre is born.

There are so many references to poetry, plays and especially other musicals, that my jeopardy competitive zeal emerged and I found myself focusing on identifying the sources and especially, what all the less obvious parodies and allusions were from.

There were all sorts of philosophical or political digs, too: Feminism (Bea, Nick's wife (Katie-Rose Connors), was determined to break the idea that  a wife should be barefoot and in the kitchen. She positively declares that women will find equality by the year 1600!); Cultural elitism (Shakespeare is demonstrably a word thief yet is widely celebrated, while the Bottoms have talent but no audience and money); Religious hypocrisy (Brother Jeremiah (Matt Ramer)), a smug Puritan, thinks the Bottom brothers' plays are sinful while nearly everything he says is a risqué double entendre. The referential list goes on, and hilarity results.

I loved the versatility of Shizuka Kai's set which transported me to Tudor England, and Stephanie Kong's costumes highlighted the essence of the characters, as you see in the pictures below. Contrast the lean, elegant flourish of the Bard's attire with the over-the-top look of Nostradamus, and the understated colours of the reticent retiring Nigel.

Among a host of excellent performances, standouts were Robinson's whacky Nostradamus, the brothers, Pazandeh's Nick and Sandoval's Nigel who were great foils for each other. And for any struggling writers, Curalli's Shakespeare, effetely whining about how hard it is to be the Bard, must strike a chord. I enjoyed Spinola's choreography and thought the ensemble performed well - who can resist a tapping interlude?

Overall, with respect to live theatre, it's been a hard few years for everyone, so watching my companion's unrestrained laughter at the first musical Nick comes up with, and her inability to stop laughing, was as heartwarming as the sunshine.

TUTS plays at the Malkin Bowl until August 27th.

You can get your tickets HERE 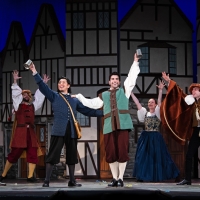 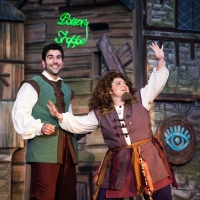 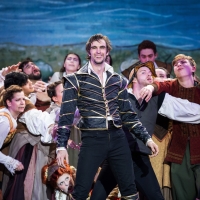