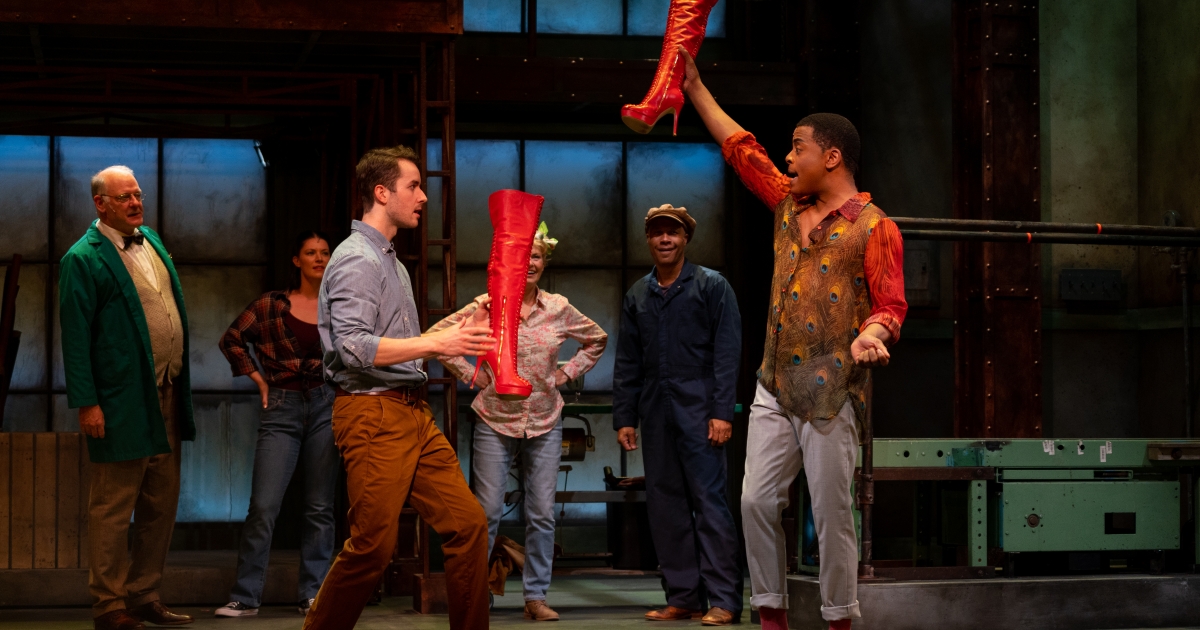 Vancouver, BC: What an exhilarating feeling to be back in a packed theatre house with an audience, lit up like a live wire by Raise You Up, the upbeat song that ends the show. In a recent podcast interview with Broadway music director and conductor, David Loud, we discussed the kind of music that keep you singing as you leave the theatre. Raise You Up did it for me.

I saw Kinky Boots twice on previous visits to New York in 2013 and 2104, and Cyndi Lauper's  music gets my dancing feet tapping so I was excited to see this Canadian production. The 2005 film, Kinky Boots, told the story of a family-owned men's shoe factory in Northampton. The market for its traditional, high quality men's shoes had dried up and shoe factory was going broke. Charlie Price, son of the business proprietor, has grown up in this world of making quality shoes, and does not want to follow in his dad's footsteps, so to speak. But with the sudden death of his father, he finds himself in charge of the factory, which no longer has the funds to operate. A chance  encounter with Lola, a flamboyant drag queen singer, inspires  a new niche in shoe making - stylish kinky boots- where "Sex is in the Heel"

I  enjoyed this show on so many different levels. Particularly at this time, when closure of huge businesses and downsizing staff is a reality, the story line of the ups and downs  of these shoe factory employees affected by the looming factory closure seems very relevant.

At a deeper level there are several moments in which we see that the persona people present to the world, often mask their true inner thoughts and biases. As Lola, Stewart Adam Mckensy, radiates confidence and pride with his electrifying first entrance. It's only later that he reveals his inner anguish at never receiving his father's approval. Lola and Charlie (Sayer Roberts), sharing their similar pains in the poignant "Not My Father's Son" is a teary moment and makes one realize the universality of that parent/child paradigm.

And then, I just loved the dance scenes, the tango, the conveyor belt gymnastics, the Milan boots scene. I really want to get me a pair of scarlet boots with 6" heels but then I probably couldn't dance in them.

Bottom line – this a joyful musical with great songs, lots of dancing, a feel good story, and you'll leave, ready to celebrate and elevate yourself and those around you. Go see it.