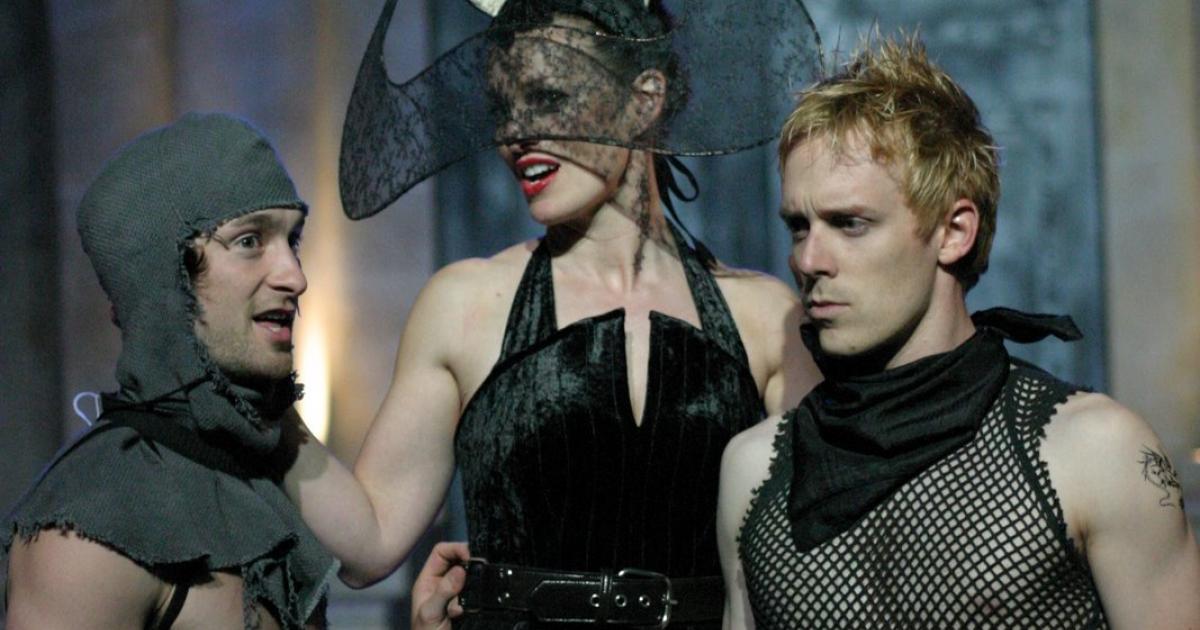 Vancouver, BC: It takes a deft touch to turn Titus Andronicus, Shakespeare’s gory tale of murder, mutilation and revenge into an excellent evening of theatre, but Kim Collier’s cast, stunningly outfitted by Christine Reimer, did just that. Despite the bloodiness, this is a production well worth seeing for outstanding performances.

Although many of the events of the play are so over the top that you may wonder what Shakespeare was thinking, many aspects foreshadow themes and characters more fully developed in later plays. The tragic events are set in motion when the heroic Titus (Russell Roberts) returns to Rome after defeating the Goths and capturing their Queen, Tamora (Jennifer Lines) and her three children. Proving that bravery in war does not necessarily mean intelligence and the ability to look ahead, Titus makes three bad choices. First he sacrifices Tamora’s daughter to honour his dead sons, inspiring increased hatred and desire for revenge in Tamora. Next he turns down the opportunity to be the next Emperor of Rome, and offers the crown to the oldest son of the late Emperor, the weak, petty and vicious Saturninus (Simon Bradbury). Saturninus promptly claims Titus’s daughter, Lavinia (Julie McIsaac) as his bride, only to be spurned by Lavinia who is already promised to Bassiana (Colleen Wheeler in a gender-bending role).Titus ignores the protests of Bassiana, his brother Marcus (Allan Morgan) and his sons, Lucius (Bob Frazer) Quintus (Haig Sutherland), Martius (Darren Dolynski) and Mutius (Hamza Adam) and in his rage at being defied, Titus kills Mutius.

Saturninus promptly decides to wed Tamora, and this power shift allows her, her psychopathic sons Chiron (Kyle Rideout) and Demetrius, (Charles Gallant) and Aaron, (Omari Newton) her Moor lover, to exact revenge on the Andronici. Abetted by the evil Aaron (shades of Iago and Edgar), Chiron and Demetrius murder Bassiana and have Titus son’s Quintus and Martius arrested for the crime, rape Lavinia, cut out her tongue and chop off her hands. Nice!

Aaron then convinces Titus that if he cuts off his own hand as a gift to the Emperor, he will get his sons back. He does – at least part of them – their heads!

Aaron learns that Tamora has given birth to a son – unfortunately, it is immediately apparent that Aaron, not the Emperor, is the child’s father and the lives of Tamora, her sons, Aaron and the babe are now endangered. Aaron promptly kills the nurse and plans to kill the midwife too. Even Iago was not quite this ruthless.

Half crazy, when Titus learns that Tamora’s sons were Lavinia’s attackers, Titus concocts a plan for revenge that ends with Tamora eating a pie baked from the bodies and blood of her sons. Titus kills Lavinia to spare her further suffering. He then kills Tamora, is killed by Saturninus, who is promptly killed by Titus’s son Lucius, who is declared the new Emperor of Rome. Clearly this is not a play for the faint-hearted. Now if there was only someone for Lucius to marry in the end the play could become a comedy but alas, no.

Jennifer Lines is a powerful, manipulative, sexy Tamora. Dressed in form hugging exquisite metallic fabric gowns, she conveys a world of emotion, with just a turn of the head or a sideways glance. Matching her performance, both Roberts and Bradbury are excellent foils for her calculating and devious actions. The fight scenes between Tamora’s outrageously “Goth” sons, choreographed by Nick Harrison are quite spectacular. Stellar performances were also turned in by the rest of the ensemble.
However for me the standout aspect of this show were Christine Reimer’s costumes.

As I was away for opening night I have not yet seen The Tempest. But so far, much to my surprise in view of my knowledge of the texts, Titus Andronicus is my number one pick for d this year. Great job, Kim Collier.