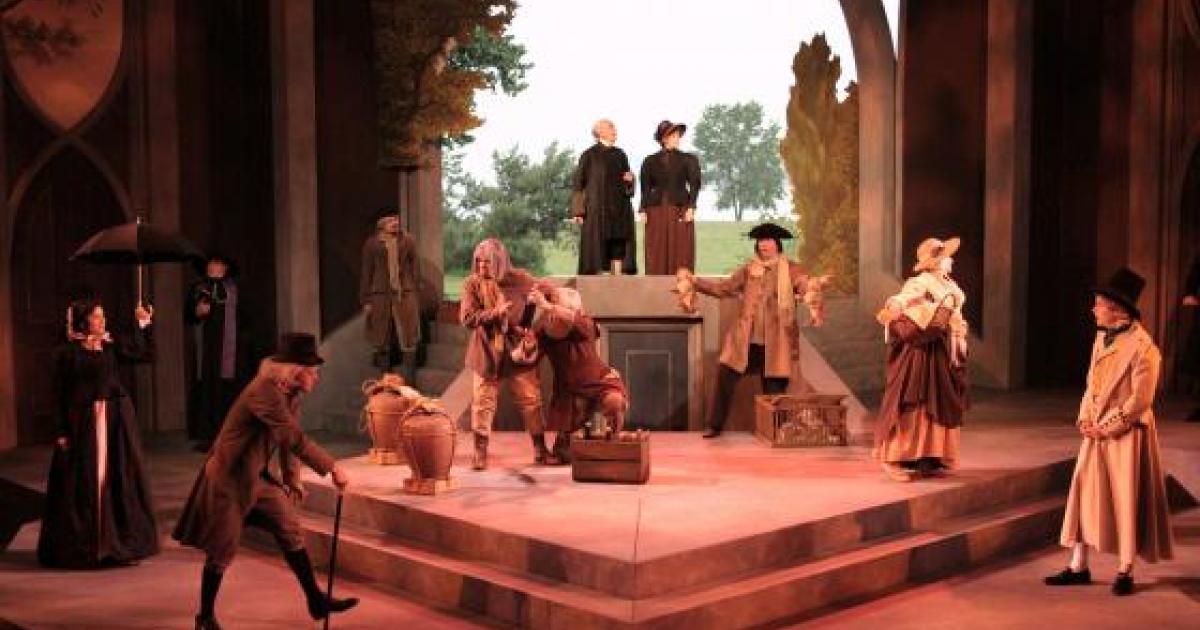 "The Taming of the Shrew" by William Shakespeare
Directed by Miles Potter.
Vanier Park Mainstage
Till September 23rd 2007
Bard on the Beach

What a great start to the 2007 season at Bard on the Beach. Last night's opening of "The Taming of the Shrew" definitely ranks among the best productions I have seen at Bard. It's not just that Bob Frazer's Petruchio, even dressed in a grungy wedding cape, could turn the most committed feminist into a simpering romantic. Nor his commanding initial entrance as the "Lone Stranger," come to "wive it wealthily" in Padua City. Those jeans!  Katharine (Colleen Wheeler) clearly did not stand a chance of resisting him.

Although feminists have long decried The Taming of the Shrew as misogynistic, I have always read "Shrew" as one of Shakespeare's most interesting love stories; a battle between two smart, strong-willed adversaries. The key of course is how Katharine's "taming" is interpreted. And Wheeler's Katharine was as close to my ideal of the role as I could have hoped for.

When I first studied this play I thought that Katharine's conversion from fiery termagant to docile wife could represent one of Shakespeare's most subtle female roles. What intelligent woman would not be shrewish when the only potential husbands are the wimpy types in love with her pretty younger sister? In comes this hunky stranger who clearly needs to feel he is in control. Equally powerless as an unmarried woman whether in sixteenth century Padua or the Wild West, Katharine is smart enough to figure out that by outwardly accepting Petruchio's directions and playing the obedient wife, she will ultimately be able to manipulate him by her wits. A version of Adelaide's "marry the man today and change his ways tomorrow," for those of you who are "Guys and Dolls" fans.

So I eschew the conventional view that Katharine's submission is the effect of profoundly abusive food, water and sleep deprivation in favor of a belief in her pragmatic, tongue-in-the cheek choice of a marriage survival technique. And in this production I was left at the end with the sense that the union between Frazer's Petruchio and Wheeler's Katharina will be a marriage of equals.
What's to resent about that?

Director, Miles Potter's decision to stage this as an Italian Western worked well allowing interesting effects in scene, lighting and sound. Marc Desormeaux's original music and sound design with music from the spaghetti Westerns of Sergio Leone was great.  The hoof beat effect was so realistic I almost expected to see a horse galloping across the back of the tent and later, to feel fireworks exploding behind me.

Potter has assembled a strong cast; too many excellent performances to mention. However Michael Scholar Jr.'s exceptionally strong comic energy as the manipulative and enterprising Tranio was a highlight.

Tags
Taming of the Shrew
Shakespeare
Bard on the Beach