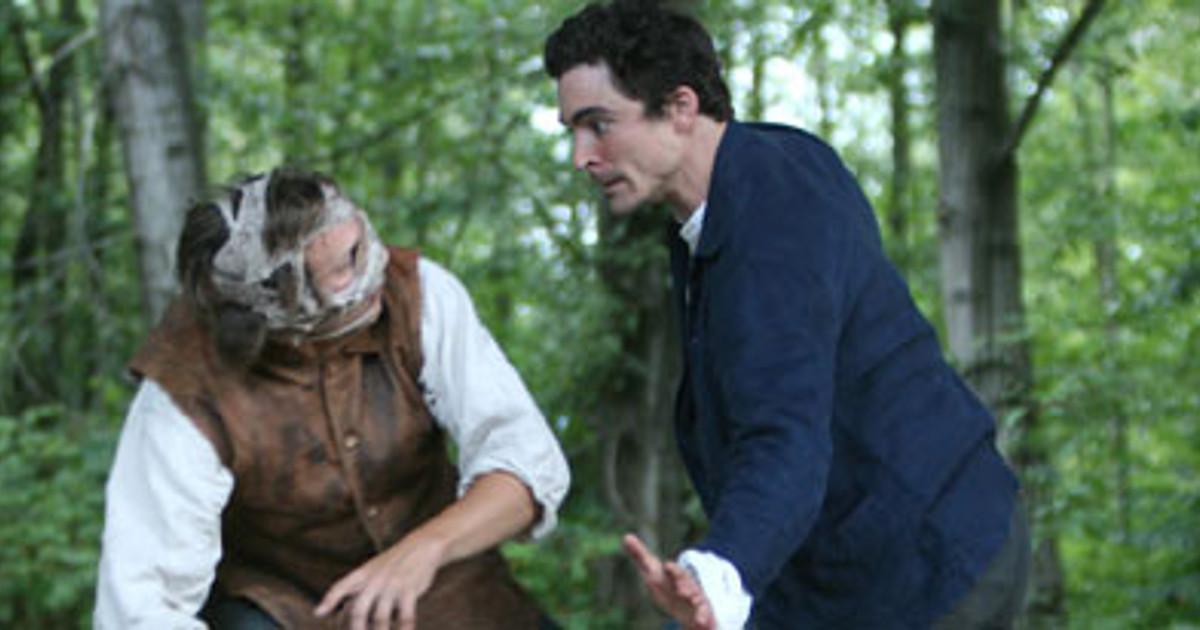 Vancouver, BC: Viewed from the sandy, stone-strewn ground below the Burrard Street Bridge, the weathered concrete columns and supporting arches of the 75 year old bridge look as ancient as Notre Dame de Paris, the Gothic cathedral around which Victor Hugo centered his novel. The rumble of cars crossing overhead, punctuated by the occasional roar of motorbikes, did not suppress the excited buzz of the crowd, waiting for the start of Boca del Lupo's latest outdoor, roving spectacular, Quasimodo.

James Fagan Tait has adapted Hugo's Notre Dame de Paris into a play with music composed by Patrick Pennefather. Two members of the Vancouver Opera chorus, Sheila Christie and Sandra Stringer, lend their strong voices to the ensemble so that most of the songs could be clearly heard although this was not always so for the dialogue.

Following the opening scene as The Poet (Billy Marchenski) tries to get the crowd to watch his play, the action takes place in three playing spaces. In the first a high platform holds a stock; a long trestle runs the length of the second space and in the third, van roofs stand in for the Court of Miracles, home of the gypsies of Paris.

A lot of story is packed into this play. Depending on translation and format Hugo's novel is several hundred pages long. So here is a much abbreviated synopsis. Quasimodo (Jay Dodge) is the hideously deformed hunchback, who has become deaf through his work as bell ringer at Notre Dame. During the Festival of Fools, he is elected King as he is the ugliest person in Paris. The dancer, Esmerelda (Gemma Isaac), abducted as an infant by the gypsies, is terrified when Quasimodo approaches her. The poet rushes to her rescue and is beaten up by Quasimodo who is arrested. Esmerelda falls for the dashing Archer, Phoebus de Chateaupers (Victor Mariano), her rescuer, and they arrange to rendezvous at 7 that evening. The Priest (Shane Snow) is insanely jealous and stabs Phoebus, leaving the gypsy girl to take the fall for the murder. Esmerelda is tortured till she falsely confesses to murdering Phoebus, and is sentenced to death. Quasimodo rescues her and takes her to the sanctuary of the cathedral.

Ultimately Esmerelda is executed by hanging; Quasimodo pushes The Priest to his death, and disappears. Years later when the remains of the gypsy girl are found, the skeleton of the hunchback is found curled around her. And all this in 90 minutes. Several members of the company play multiple roles.

I enjoyed Dawn Petten as King of the Court of Miracles and Sarah May Redmond as the vicious Sheriff. Brian Sutton's The Goat and Registrar, and Snow's Scarecrow were also fun. As expected in the Boca outdoor spectacles, a fair amount of use was made of aerial activity. The death of The Priest was most impressive, drawing a collective gasp from the crowd.

I found the pacing a little slow, largely due to having to move a large crowd from set to set. And the dialogue was not always audible particularly in the penultimate scene, when they were speaking from the cart on the opposite side to where I was standing. Hopefully as the production settles in, these aspects will improve. The choice of Hugo's story is interesting if a bit ambitious. Certainly it fits well into the setting under the bridge.