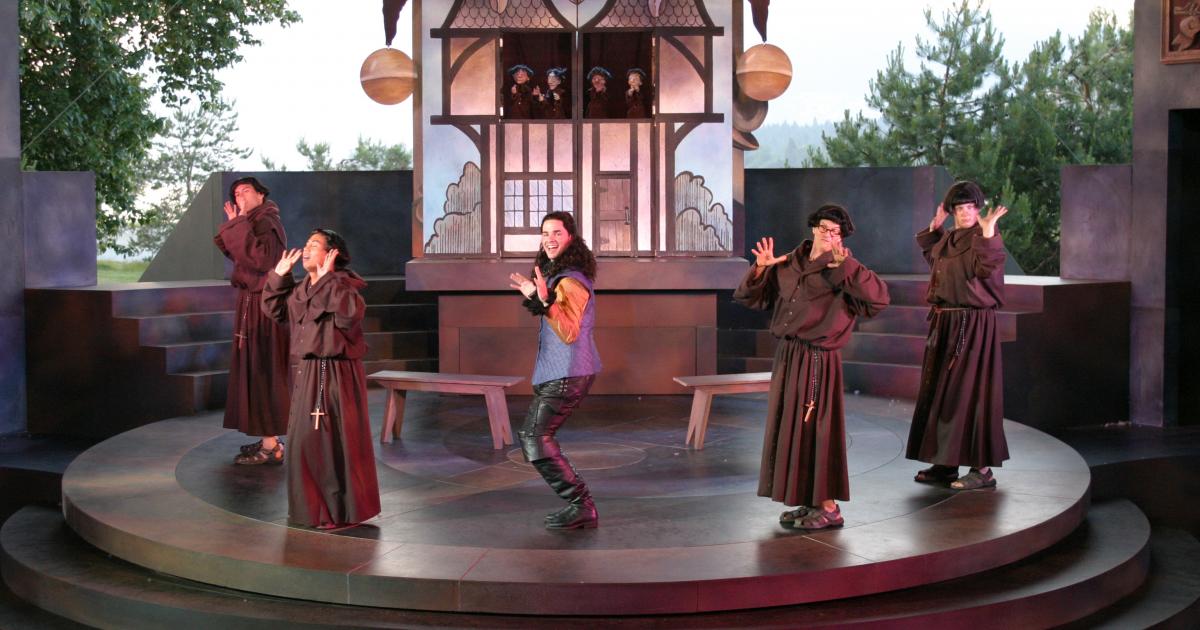 The Comedy of Errors by William Shakespeare
Directed by David Mackay
Mainstage at Vanier Park
Bard on the Beach
until September 26th, 2009

But I digress from the play at hand. The Comedy of Errors is thought to be one of Shakespeare's earlier plays  and it really is more farcical than witty.  The story revolves around the incredible coincidence that  two sets of identical twins separated in infancy, all  happen to be roaming around in the city of Ephesus on a  particular day. And that day just happens to be when a merchant from Syracuse, Egeon (Neil Maffin), father of one of the sets of twins, has arrived in Ephesus, seeking his lost son. Ephesus is  at war with the city of  Syracuse, and as a Syracusean,  Egeon is to be executed for simply being in the city. Solinus (Christopher Gaze), the Duke of Ephesus,   warns him that if he can't pay a penalty  by sundown, he will be executed in accordance with the law.

While Egeon tells Solinus how he happens to be in Ephesus, we learn  that he and his wife, Aemilia, had twin sons.  Egeon bought another set of twin boys to be servants to his sons. In the course of  a shipwreck, Egeon was saved with one of his sons and one of the twin slaves. Although aware that his wife and the other twin son and slave were also rescued, he did not know where they had been taken. The son that Egeon raised in Syracuse , now grown, took his lost twin's name, Antipholus and set off with his slave Dromio to find their lost brothers and Egeon has been searching for them for five years. So Egeon, Antipholus of Syracuse (Kevin MacDonald) and his bondsman Dromio  (Ryan Beil) all arrive in Ephesus where unknown to them, Antipholus (Bob Frazer) and his servant, also Dromio (Shawn Macdonald) happen to live.  Amazingly both sets of twins dress absolutely identically, and even the wife of  Antipholus of Ephesus, Adriana (Coleen Wheeler) and her sister Luciana (Jennifer Lines), can't tell them apart.

Of course the whole thing is utterly ridiculous, and director MacKay smartly capitalizes on the zaniness by taking the staging  over the top. He peppers  the scenes with wildly improbable characters spouting funny off-text lines - a hawker of tasty rat-on-a-stick snacks - yum yum - a falcon trainer who doesn't teach falcons to speak - because they  aren't  parrots!  -  mechanical rodents skitter across the stage, and on and on. Kevin McAllister's set adds to the funky atmosphere. The  backdrop shown in the photograph - with the jester's cap and bell, represents multiple structures including  the house of Antipholus and Adriana. It opens to make a puppet theatre for  a fast paced scene where  the Dromios and Antipholuses  (or would it be Antipholi?) chase each other around the structure while  puppet miniature twins simultaneously play out the chase. Totally cool!  Even costume designer Mara Gottler gets in to the "over the top" spirit. Watching Solinus, the powerful Duke of Ephesus, mince around the stage in something that looked like a cross between a ball gown and a battleship - preposterous. But it must have been such fun to design.

This is very much an ensemble piece but Ryan Beil's unerring comedic timing made Domio of Syracuse a standout  character. All the harder to observe the violence that both the Dromios were subjected to throughout the play. It added a dark side to the humourous depiction of Elizabethan life- as did the lurking executioner.  I don't think life was great as a serf in those times- and the fast food menu from the street vendors does not appeal much either. But seriously,  what do you do with a play based on a premise that is so improbable  you don't want your audience to think too much about it?  You take it to the extreme and keep them laughing  and  MacKay and his team have succeeded in doing just that. 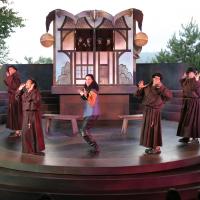 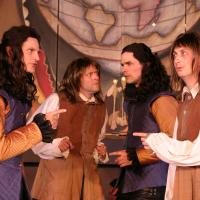