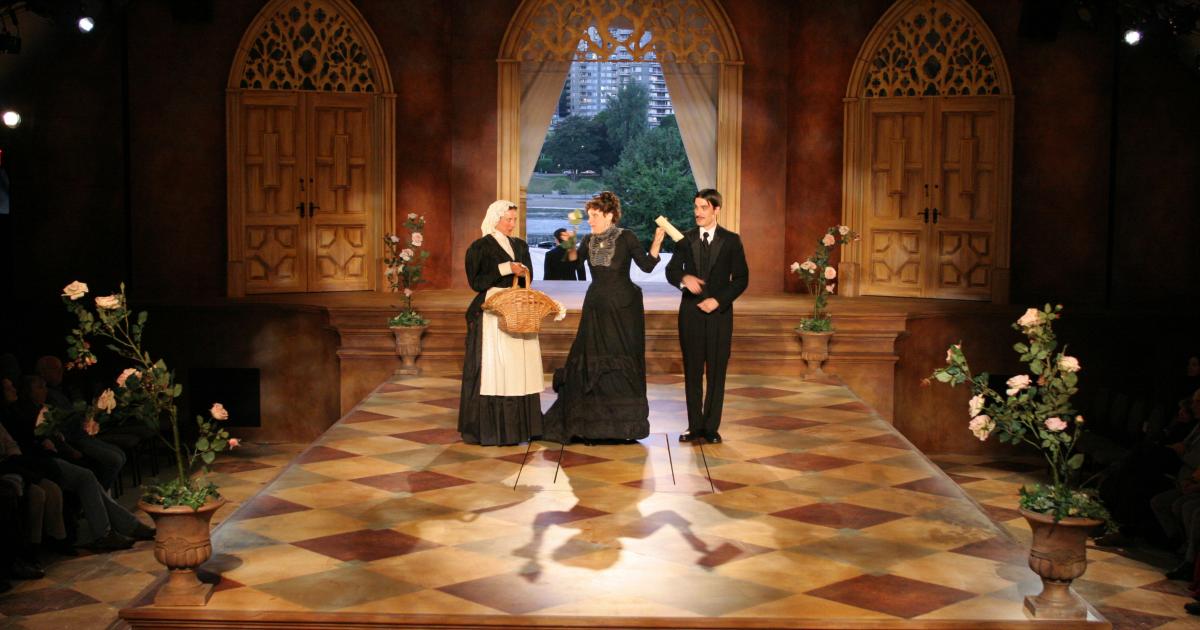 The main story line is hard to summarize in a short paragraph but here goes. The heroine of this tale is Helena (Lois Anderson), orphaned daughter of a recently deceased physician, and who is in love with Bertram (Craig Erickson), the snobbish son of the recently widowed Countess of Roussillon (Patti Allan).  Bertram has been called to Paris to attend the ailing, terminally ill King of France (Duncan Fraser) at his court.  He is accompanied by the elderly foppish but kindly Lord Lafew (Allan Morgan).  Helena's father has left her a secret prescription that could cure the king's illness, and she decides to follow Bertram to Paris to try to heal the King.  The Countess, to whom Helena has been like a daughter, supports her plan, and also approves of her love for Bertram.  When Helena succeeds in curing the King, he grants her the right to marry any nobleman she chooses. She picks the snooty Bertram who is horrified at having to marry a poor, lesser status woman.  He has no choice but to obey the King and marry Helena. However he decides to leave to fight in Italy before consumating the marriage.

As Bertram, who obviously lacks any insight into character,  leaves for Florence with the braggart soldier, Parolles (Scott Bellis), he leaves a note warnng Helena not to call him husband until she has possession of his ancestral ring (which he vows will never leave his finger)  and can prove that he has fathered her child. After returning to Roussillon, Helena lets it be known that she is off to Spain, but disguised as a pilgrim, she heads off to Florence instead. She meets  widow Capilet (Jan Wood) and her daughter, Diana (Celine Stubel), whom Bertram has been trying to seduce.  Helena reveals to the two women that she is Bertram's wife,  and the three of them figure out how to take revenge on Bertram.  Diana will agree to a sexual liaison with Bertram with three  provisos; he may stay only one hour, they will not talk, and she will get his ring.  The disguised Helena takes Diana's place and acquires the ring. Bertram in turn gets the ring that the grateful King gave Helena.

When Bertram hears the rumour that Helena has died in Spain, he figures it is safe to return to Roussillon, where the King has come to visit the Countess. Bertram is wearing  Helena's ring,  and knowing that Helena is dead, the King accuses Bertam of her murder.  Helena (still disguised),  Diana and her mother have also come back to Roussillon. Diana  accuses Bertram of seducing her, although married. Helena reveals the plot, Bertram begs for forgiveness, the King tells Diana that as a chaste woman he will give her a dowry and she can choose a husband, and the play "ends well" for all concerned.

Patti Allan is warm and gracious as the Countess and  Fraser iis both imposing and imperial as the King.  Erickson has the unenviable task of portraying a rat in such a way that one can believe that  Helena could actually fall in love with him. Morgan as Lafew and David Marr as Lavatch, are both effective in their larger than life versions of their characters and Bellis is suitably amoral as the lying Parolles.

With  a thrust configuration that provides excellent sightlines from all three seating sections, Pam Johnson has created a rich looking, versatile set that serves equally well as a palace courtyard, a garden or a camp. From the detail on the doors, to a laundry line that is raised to suggest a tent,  to a centre section that moves up or down to become a tomb, a bed, a table - it all works beautifully. The choreographed movements as pots of flowers were brought on and off the stages elicited murmurs of appreciation.

I actually did not anticipate that I would enjoy this play as much as I did. When I read it, I was thoroughly irritated by Helena's infatuation with such a jerk. But this production, beautifully directed by Rachel Ditor,  and  Anderson's glowing performance held me enthralled and it turned out to be a little gem of a play. Another hit for Bard this season. 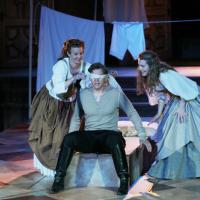