Being  South African by birth, I was naturally intrigued when Enigma was suggested as a before-theatre dinner spot. The proprietors are from South Africa and my  dinner companion suggested that the menu featured  several dishes of  African origin.  We were on our way to see Ivanov at the Jericho Arts Centre so the location of Enigma at 10th and Trimble, just up the hill from the Centre, was perfect.

As well as  "foodie" I am very much a "wordie" so naturally I wondered about the name. Enigma is an unusual name for a restaurant. But  the Buchmans explain - "how could such delicious food possibly be so affordable?"  Hmmm.... That's setting my expectations high.

The menu was appealing with lots of my favorite appetizers, and the prices did seem reasonable. Unlike the restaurant  Braai which I reviewed in New York last year, this menu was more eclectic than ethnic South African. But I noted that the menu featured curries and that a special for the day was braised lamb shoulder. This got my dinner companion raving about the Moroccan lamb dish he had eaten here on  previous visits. Although it was not on the menu our obliging server said she would check with the kitchen. She soon returned with a message from the chef that he would be glad to make the Moroccan lamb if we wanted it.

After some serious discussion we settled instead on  the Curry platter for two. This consists of an assortment of lamb, chicken, vegetable and chickpea curries served with Basmati rice, a papadum, warm Naan bread, apricot chutney,salsa and yoghurt. We chose to substitute extra lamb curry for the chickpea curry.

Lamb curry is a specialty of the Cape Malay cuisine in South Africa, as is another lamb stew steeped in tomatoes, called tomato bredie. I often used to find the curries excessively spicy so they were a rare indulgence for me when growing up.

These curries at Enigma were delicious and not excessively hot. The platter was plentiful, more than enough to satisfy two hearty appetites. And the apricot chutney and yoghurt complemented the curry bite very well.

Although the dinner was most satisfying we could not resist sharing a dessert. Several looked interesting but the unanimous choice was the warm apple, cinnamon and pecans baked in Filo pastry and served with vanilla ice cream.

We finished with coffee, decaff for me, and then drove down the hill to Jericho just in time to see the play, which being by Chekhov, was great for post-show debating on the way home. 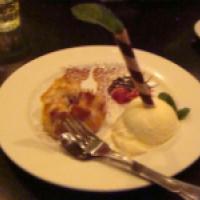 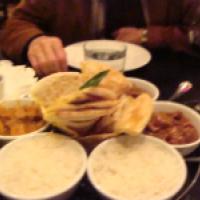