The first thing on my mind on my return to Vancouver from the South Pacific Dance Cruise: Hawaii to Polynesia was getting my visa to visit China. Beijing is where I will embark on the Diamond Princess for 16 dance- filled nights and days while cruising from  China to Thailand.  And I only had two weeks to get ready.

"Another dance cruise?"  you may ask - "you are almost turning this into a profession".  And rather than blush and confess that I am now a confirmed dance cruise addict, I will loftily refer you to the explanation for this new tendency towards globetrotting on moving dance floors. It can all simply  be blamed on last year's New Year resolution to develop  spontaneity.  Well that is my story and I am sticking to it for the rest of the year.

But back to the visa. I had my passport photo ready and my plan was to go Monday morning to the Chinese consulate visa application office and apply. I figured that would give me a few days lee-way if it took longer than I expected.

My friend Susan told me "you have to go early"  but I figured if it opened at 9 I would let the lineups dissipate and get there a lttle later. So Monday morning I took my time and strolled into the Visa office just after 10. The place was absolutely jam packed with people, occupying every seat on the rows of benches and also lining up outside. I asked the man at the desk where one gets a number and he just laughed at me.

"We've given out all the numbers for the day"  he says.

So I asked him what time do you have to be there to get a number. "Well" he says,"when I get there at 7 in the morning there is already a line-up. Ok so Susan was right- why did I doubt her?

I had early appointments the next two days - and I really wanted this visa in my hand soon. The trip was coming up fast - so Thursday morning I set my alarm for 5 am - just enough time for coffee, yogurt and fruit, and a quick shower, and shortly after 6 I was driving over the Granville Stret bridge to the Visa office on Broadway. It was still pitch dark outside and I was a bit apprehensive  but on arriving there and heading upstairs to the second floor, I found the place was brightly lit up  and there were already about 6 people ahead of me in the line.

I chatted a bit to the young guy in front of me, and then read the travel information I had brought with me, as more and more people began to arrive. The line up stretched along the corridor and round out of sight. And this was more than two hours before the place was due to open.

In my usual chatty way, I struck up a conversation with Frances, the lady next to me in line, who was soon joined by her husband Joe. It turned out that they had made a last minute decision to go on the same Princess cruise that I am taking, and were also on booked on the same flight to Beijing a few days before the cruise. We passed a pleasant hour talking about the excursions at the various ports, and they told me about their previous visits to Beijing, and the pronunciation of a few of common words listed in the brochure - please,thank you, etc.

Once the office opened at 9 the line moved quickly. We got a numbered ticket and went in and sat down. I could not figure out  how the numbers worked. they had only two windows open but they seemed to have multiple numbers that were the same. So my number was J3, the guy before me was A3  but they only flashed  a 3 - so everyone with a 3 piles up at the window trying to get served at once.

Once I saw the  person at the office window, it took only a few minutes for her to check that everything in the paper work was alright, and she gave me a time to come back to pick it up.  I elected to pay a bit extra  rather than risk the 4 or 5 working days, so by the weekend I had the visa in my passport, an extra photo for the Vietnam visa which is given out on board ship, and was ready to go.

Next on my list was to do some reading about the places we were to visit on the cruise. We were boarding the ship in Beijing, China, or to be more correct the port of Xingang, about 2 hours drive from the city centre. The first port of call is Shanghai. I have not been to Beijing but I worked in Shangai on a two week assignment for Project Hope with my colleague, Denis Benjamin, a pathologist, and Julie, whose surname I have forgotten but whose area of expertise was microbiology. This was when a new Children's Hospital ws being built in Shanghai. I can't remember the dates but it was more than 10 years ago.

A brief call at Okinawa, then onto Taipei, neither of which places I have been to. We have two full days in Hong Kong - I have been there several times previously, then stops in Vietnam, another new country for me. Then Singapore - I was there for a conference of the International Association for Pediatric Laboratory Medicine a few years ago, and finally to Bangkok where I also spent some time consulting on a laboratory project.

Anyway I thought that some preliminary research especially into weather, money and time difference was important. But of course things like money and time, and weather for that matter involve numbers - and I am a letters person.

So maybe I will start with the weather.

As you can see from the map (courtesy of Microsoft on line) our start point of Beijing is significantly north of Shanghai, our next destination and according to the weather network on the day I checked, Beijing is  many degrees Celsius colder. So Beijing is probably similar to Vancouver at the moment -that means at least a jacket and a hoodie over my short sleeved polo shirt. Then from Shanghai onwards it becomes positively tropical so sandals and light summer dresses seem to be in order.

To complicate matters apparently the brilliant Chinese scientists have figured out how to effectivly seed the clouds to cause rain, only two days ago, instead of rain they managed to make it snow and the temperature in Beijing that day dropped to - 3. Isn't that fascinating?  But apparently over 100 flights were delayed that day at the Beijing international airport. Hopefully there will be no more cloud seeding for the next few days.

Then I checked into the currency situation and what a mish-mash that is. I got some yuan and baht for airport transport in Beijing and Bangkok and am just going to have to use credit cards if I need to buy something anywhere else.

Then Michael and I spent some time figuring out when would be the best time for skype contact between me and either NY and TO or California. This was where my number-itis or should it be numerophobia comes in. We went back and forth because he kept on subtracting 9 while I was adding 16!

I figured out that there is a 16 hour time difference between Beijing and Vancouver so when it is 8 am in Beijing it should be about 4 pm the previous day in Vancouver and 7 pm the previous day in New York/Toronto.  On my Nintendo brain saver game card one of the games designed to make my "mature" brain function more like that of a teenager - yup they actually tell you what your "brain age" is - is an exercise to calculate time and day from clocks in different positions - I kind of sucked at that - I need paper and pencils- with an eraser - to figure those things out

Anyway I am prepared for the trip, with currency, and dance shoes  -and ready for more dancing.

Today I leave for Beijing. The Air Canada flight leaves Vancouver at 12:4 and after a 10 hour and 42 minute flight is scheduled in to Beijing at around 3:40 the next day, Wednesday 4th.  I decided to splurge and travel in executive class - I figure my "mature" body needs to be able to move around a bit more than one can sandwiched in an economy seat. The plane is a 777, fitted out with those pod-like seats that can be extended into a comfortable sleeping arrangement. I got a really good deal and am pleased with my decision. Its really the only way to travel for long trips. My cut off is around 9 to 10 hours. Less than that I will scrunch in economy. As someone pointed out thats about 160 dollars an hour  versus maybe 100 dollars an hour. The difference for me is worth it.

Anyway here I am in my opwn personal executive class pod.

The flight is absolutely packed. Executive class is completely full. I decided to watch Julie and Julia, a film I have been waiting to see but have not found the time  - too much travelling. That solidified my intent to write up the culinary aspects of this Travelblogue, the foods and wines, in separate postngs so you can vicariously indulge - and watch my waistline expand - in the posts in Eating my way through the South-East Asia Ballroom Dance Cruise.

Well we are about 5 hours into the flight and I am going to sign off until my next post . You will hear from me next  from Beijing. 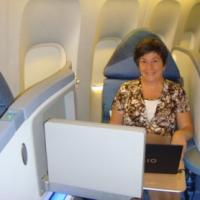