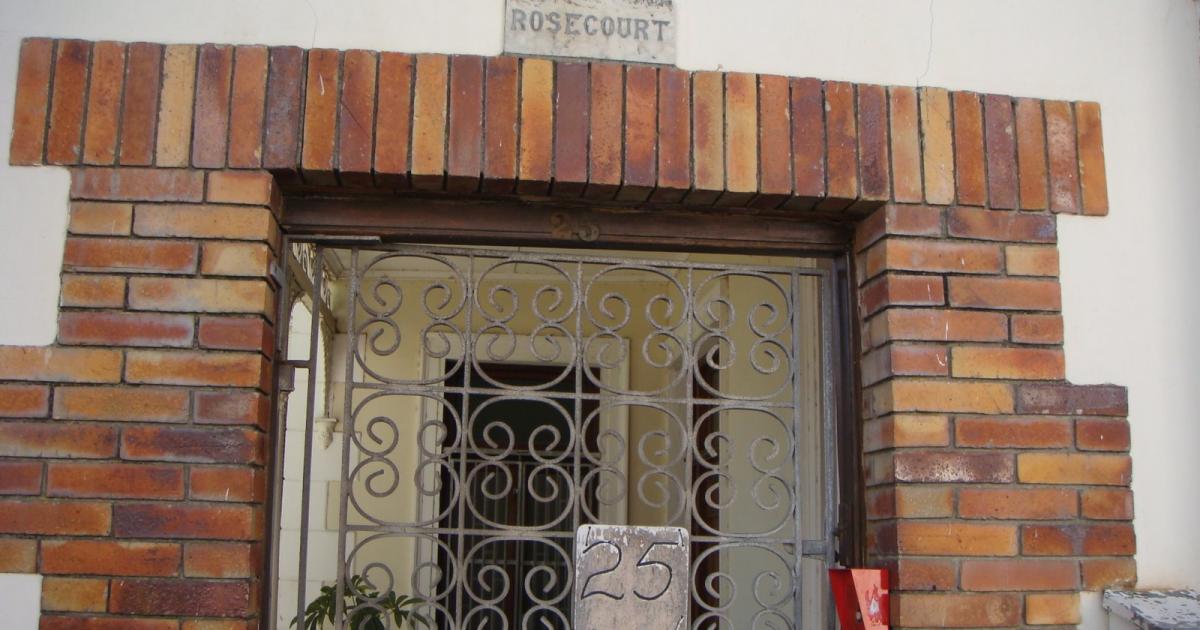 In the area near the Scout Hall were several places of historical import to me and Barry took me on a little tour down memory lane before my dance class.

Good Hope Seminary was the all girls high school I attended for my last two years before matriculation. I was sent to boarding school in standard 9 (the equivalent of grade 11) by my exasperated parents in the hopes that I would forget about being a social butterfly – well I was wild about dancing even then – and once again become the academic star I was before I discovered boys! It worked. There was really nothing else to do at boarding school but study, so during my sojourn at Good Hope my grades improved so much that I made it into .

The picture of the school building is Good Hope and if my memory serves me right, the windows on the top floor where the dormitories used to be. Bob nearly got me expelled by throwing stones against the window late one night to attract me to the window so we could talk. Unfortunately it was the wrong window and I slept through all the noise, so next day when we were all questioned about the incident I could honestly proclaim total innocence.

The next stop on the tour through memory lane was where I realized Wolfe was right. You can’t go home again. We stopped outside Rosecourt, which, in my teens, was a hall where the local kids used to go to dances. I went there only once against my parents’ wishes as I was just getting over a cold. That was the night I met Bob. I was fifteen. I sometimes used to wonder what would have happened if I had been a more obedient and malleable person and not defied my mother. Would we have met elsewhere? On the beach at Muizenberg, maybe? Anyway I went to the dance at Rosecourt, met Bob there, and by the end of our first date a while later, I knew that was the man I wanted to marry. Six years later when I was half way through medical school and he was working as an engineer, we tied that knot!

So there I was outside Rosecourt, trembling with excitement – (ok I exaggerate) – but anyway hopeful that I could see the hall where we had actually met. We pressed the bell and were invited into the building but it had long ago been remodeled. Only a narrow passage leading up a few steps to what had been the bandstand, remained. Oh well, the memory is filed in my mental archive.

Time for dance lesson number 2. We decided to focus on tango – another dance in which I felt the movement was awkward for me. I made up my mind in advance that I was going to get out of my head and just feel the movement. One of the things I realized about practicing a lot by yourself – although important to learn the steps- is that one anticipates rather than responds, and then one is leading oneself rather than dancing WITH and responding to, one’s partner’s lead. Anyway by the end of the hour I felt as though I was moving like a tango dancer with none of the strained awkwardness I usually feel in this dance. The CBM just came naturally. And the hour finished too fast. I am beginning to understand the theory of relativity!

To get back to the flat I decided to follow Sherida’s advice and call a Rikki. It’s like a small taxi, with a flat rate of 20 rand within the downtown zone. Twenty minutes later it arrived and I hopped in. After a few minutes even my geographically challenged mind told me we were going in an odd direction but just as I was getting a little uneasy he stopped and a second passenger climbed in. Then I realized that they pick up multiple passengers where possible – that’s how they keep the prices down I guess.

Number 2 passenger turned out to be visiting from , on his way to spend a year in so we chatted about sights and things to see and do in . Then I noticed we were heading over

Kloof Nek Road
and descending the other side of the mountain with stunning views of the beaches and the intense blue ocean. We picked up passenger 3, a local man who lived in a gated residence high up on the slopes, and then zoomed down to drop off Irishman at Number 4 Beach Clifton. I looked[img_assist|nid=117|title=Good Hope Seminary High School|desc=|link=none|align=left|width=300|height=225] at his fair skin and suggested he use a ton of sunscreen. The sun is quite merciless on those white sand beaches.

Back at the flat, we waited for Carole to return from work and then packed the car to drive to spend the weekend in a holiday house at Langebaan , up the west coast. It took about 2 hours because of weekend traffic.

By the time we got organized it was time for dinner. We drove to , another small ant for yet another excellent fish supper. This time I had the Cape Salmon AKA Geelbek (which means yellow mouth) which bears no resemblance to our Pacific or Atlantic Salmon but is a white fish. Yummy. We also polished off a bottle of Chenin Blanc.

Then Carole beat me embarrassingly in a game of Scrabble – I kept getting sets of tiles like ZXQBTCD with nary a vowel in sight. Mind you I did manage ADZE on a double word score but all in all not a shining hour for a woman of many words! I retired to bed in a state of abject humility.