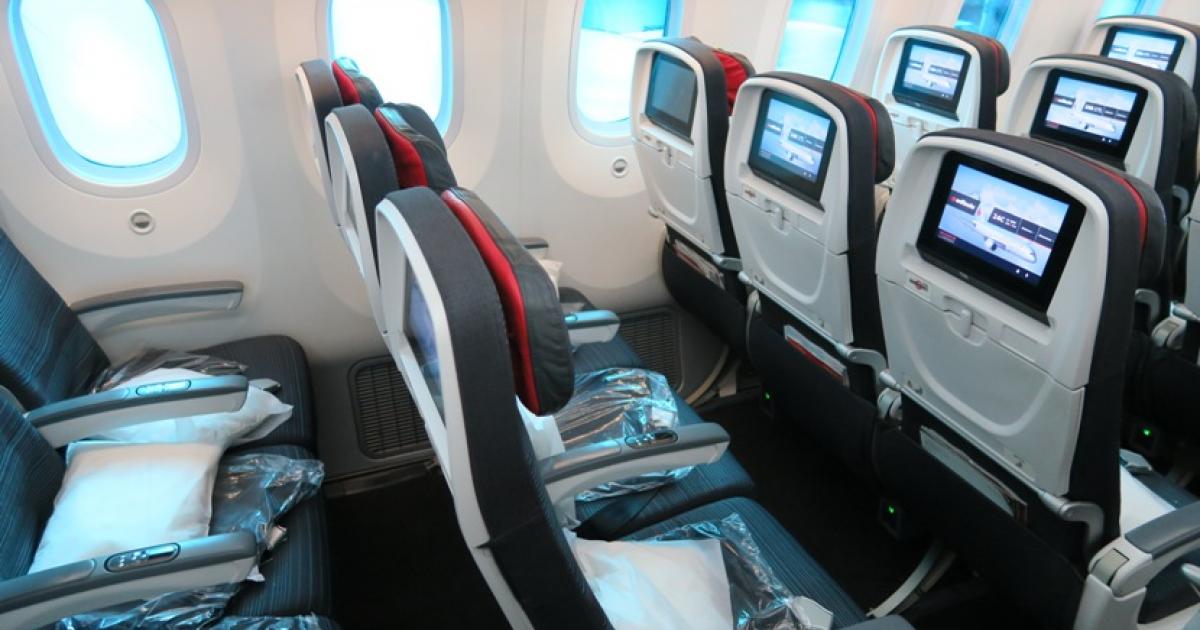 Packed, downstairs, and chatting to my neighbours while waiting for the cab at 3 pm, I was feeling much more relaxed than my usual bleary-eyed 6 am-to-the-airport-self. The flights to usually seem to be late afternoon so theoretically one should sleep for the nine hours and arrive refreshed and happy, thinking how wonderful the trip was, and book again with the airline for your next trip. Ah, but what about those of us who don’t sleep easily on planes?

Well Air is in the process of revamping its seating in Executive class to create semi-private little cubicle like structures with seats that extend into an almost horizontal position like a bed. On the seating chart for my flight it appeared as if the flight had the old configuration still but when I entered the 767, surprise – it had the new f-angled seating configuration, complete with the personal touch screen video format.

“Great”, I thought, “maybe I will actually sleep on this flight”. The space is obviously much more comfortable than the middle seat in economy on a previous European trip – the one that made me vow “executive class or stay at home!” Settled in, took out my borrowed Sony E-book reader with its 23 books – thank you Michael – and anticipated the 9 hour flight with equanimity.

Decided to break my rule of no alcohol on flights in the hopes that a glass –or two - of wine would knock me out so together with the smoked salmon appetizer, pepper steak entrée and cheese/fruit dessert, I tossed back –hmmmm- I mean savoured a fine Pino Grigio from and a mercifully un-oaked Chardonnay from the region. My brain felt suitably fuzzy just long enough for the trays to be cleared, the cabin to settle down and the lights to be dimmed. I reclined my seat, pulled the duvet up (yes, they provide a duvet in these personal oases instead of those scratchy blankets) and closed my eyes. Checked my brain – oh-oh – fuzziness gone! Instead of feeling sleepy I was wide awake. How the heck do all those snoring individuals around me do it? Ok I realize its only 8 pm for my body even though according to my watch (reset to time) its 4 am but still. Time for strategy. From the dim recesses of my interest in hypnosis and relaxation period, I recalled the techniques I learned. Stilling the mind, counting down the steps to the small private beach with the soft sounds of wavelets caressing the white sand and warm sunshine on my body – nope – immediately started thinking of all the beautiful beaches I had swim off round the world, and of one in particular in Cape Town that I hope to visit this trip. Ok, plan B. On with the earphones of my IPod on which I had recorded my dance music. A series of slow foxtrot would surely be soothing. I skipped through the jive, chachas and sambas, turned the volume down low – and listened to the beginning strains of “A Nightingale Sang in .” Not smart either. The dance routines I have been working on so intensely took over and my whole body wanted to get up and move to the music. I could just see the headlines in the Sun, or worse, the National Post or Globe and Mail. “Crazy dancing doc forces plane to land at North Pole – says she can’t sit still when there is music playing.” Off with the Ipod. Ok, admit temporary defeat – watch a movie till its really later time. Tried the Jodie Foster revenge movie. Too dark – literally- not a comment on the movie. Then found the Johannson Nanny movie. That was sweet. Then a bit of writing – 9 hours passes slowly- specially when it seems everyone is asleep except you and the flight attendants- and the pilots hopefully.
Tags
Travel Blogues
travel
writing
London
united kingdom
air travel
planes
air canada