Merchant of Venice, Maynardville in the Dark 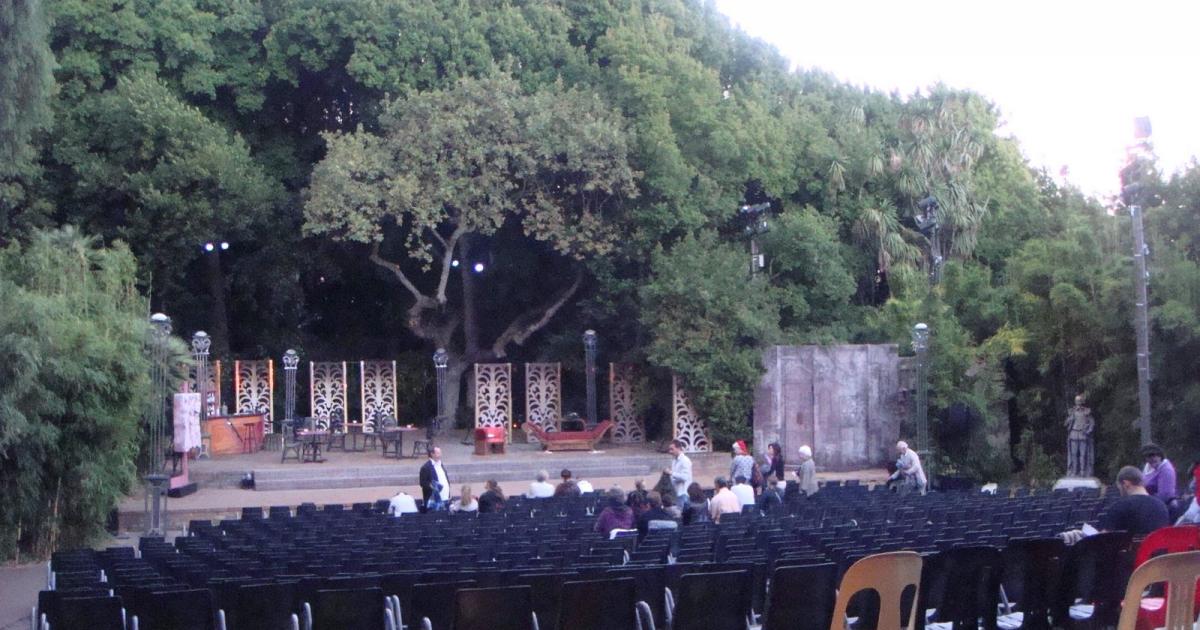 Merchant of Venice, Maynardville in the Dark

Today’s day time highlight other than a great chacha and samba dance class was lunch with two aunts, Essie and Rosaline, who were my mother’s first cousins, at the courtyard restaurant at Winchester Mansions on Beach Road, Sea Point . I caught up on the details of offspring and marriages for my family tree. My genealogy work sort of got put on hold for the pastg few years but I am slowly getting back to it.

My one “big” theatre experience plan was to see The Merchant of Venice at Maynardville open air theatre. Barry had picked up tickets for himself and me, and after an early super with Carole we drove off to Wynberg where Maynardville is located. Parking was quite an experience in itself. There is little parking around the gardens and cars were jammed into tiny spots lining the streets all around. As we were slowly driving by, one of the self-appointed paring attendants with a bright fluorescent vest, waved Barry up a side street to a spot on the pavement just under a no-parking sign. Since no-one seemed to care about the no parking signs, we left the car to his tender care and made out way to the theatre. Barry was quite convinced he would get a ticket so we took a bet for a toblerone chocolate. At least if he got a ticket there would be some sweet compensation!

Things looked promising as we entered the gardens. People were milling around, many having picnicked on the grass. They were selling a coffee table-like book called “Shakespeare at Maynardville.” I took a shot of the stage from the back and then we found our seats. The grass slopes up fairly rapidly so the sight
lines to the stage were not bad. The place was packed. The show started promptly on time. I found the accents a bit disconcerting – some frankly South African English, some more British, one sounding vaguely German – but the sound system worked well initially and the actors were clearly audible despite the strong breeze and rustle of leaves. Then on came Portia…and disaster struck. Whether her microphone was positioned incorrectly or was faulty, her voice faded in and out, so much of her lines were inaudible. Finally she exited and one could almost hear the entire audience thinking, ”Ok, so they will fix the problem.” But no – Portia re-enters and the sound is as bad as ever. Just as my level of irritation was rising to a point when I wanted to stand up and scream “stop the show till you fix the bloody microphone” everything went black and silent. There was a minute of stunned silence and then a mixture of groans of disbelief, frustrated laughter and mumblings of disgust. Nobody could believe that Eskom had chosen this time to “load shed”.

As it turned out, this was not a planned “load shed” but a massive power failure that plunged almost the entire Cape Peninsula into the dark. Someone from the show announced that it was cancelled and that we should be careful exiting in the pitch dark. He said “this is probably the only time you will ever hear a request in a theatre to turn your cell phones ON.” The little light from the phones helped illuminate the uneven pathways out of the gardens.

As we drove back over De Waal Drive then navigated traffic lights that were dark, it was actually quite eerie to see huge swathes of black where normally millions of lights would be visible. I could not help thinking of the closing scenes of Atlas Shrugged.