By around 8 am we were docked at the pier in St. Thomas, one of the three main islands (with St. Croix and St. John) that comprise the US Virgin Islands. Once part of the Dutch West Indies the islands were taken over by America after the first world war and the islanders are now American citizens.  Charlotte Amalie is the capital and main port.

We had decided not to book any excursions - a decision that  actually worked out fine.  However Joelle, who used to livd in St. Thomas , told us that we should really get out and see around the island as it is quite beautiful. We had every intention of doing so and  went  ashore early to do a bit of shopping and then get a cab to do some sight-seeing.  But the heavens decided otherwise. We had just finished our  shopping when It  began to pour - a heavy pounding rain - and within minutes we were  all soaked through to the skin. So, shivering despite the soggy warmth,  we splashed back to the ship and did not get up to the mountain to see the reputedly famous views. We decided to relax for the rest of the afternoon, read  and make the best of our free time.

By six thirty we were dancing in the Club Savoia. The music alternated between the band and  Wendy's music when the band is on break, which gives a lot of dance variety. Then to our frustration the cruise staff came out to play games such as bingo and took over the floor. That meant we had to move to Club Verde and its much smaller floor until dinner time.

We had a nice sized table for three and the service was as good one would expect in a better level restaurant. Although I tend not to drink much wine on these dance cruises (I don't want to fall over during a quickstep or Viennese waltz, right?) we decided a good bottle of wine would complement this special occasion nicely.

We chose a bottle of Elena Walch 2008 Gewurtztraminer from Alto Adige, Italy.  I was quite intrigued at the idea of an Italian Gewurtztraminer as I associate the varietal more with Germany or the Alsace region of France , as well as our Okanagan region in BC now of course. But later, when I did some research I remembered that the varietal was actually named after the Italian town of Tramin - the full name in German, Gewurtztraminer,  meaning spicy Traminer. And the Trentino Alto Adige region is in the North East part of Italy, bordering on Austria; German is as commonly spoken there as Italian.

I also read that Elena Walch was an architect who after marrying into a wine making family decided to switch careers - I can empathise with that - and focus on making top quality wines. So much for my intrigue about the unusual name and Italian varietal. The wine itself was perfect for the occasion, complex and nicely balanced without overly spicy overtones.

The menu included appetizers of foie gras (a pate and mousse-like item, with a brioche), and a crab and scallop dish.

Unlike the downstairs kitchen where there were clearly  difficulties in getting cooking times right, the rack of lamb was served perfectly pink. The baked sea bass was also declared tender and perfectly cooked.  That's the advantage of eating in the smaller restaurants where they are not serving 1500 people at the same time.

Each of us ordered one of the desserts so we could try all three. The canolis were deicious and thecholcaolate pyramid even tempted me, not a chocolate  lover, but the creme brulee was a bit bland.We all enjoyed the dinner and the chance to be together. It would be great to eat there again but then of course the whole fun of talking to the rest of our dance group is lost. So we will trade good food for good company.

After our dinner, feeling pleasantly relaxed we went down to meet the group. We had to dance in Club Verde because they had scheduled more of those inane  games in the Club Savoia. Although it was not that great a space to dance in, we stayed there till the games were over. By eleven we were back on the great wood dance floor and we danced till well after midnight again

Thursday, December 31st, 2009 in San Juan (Puerto Rico) and the New Years Eve party on board

Our stop in San Juan was relatively short. We arrived around 8 am and all passengers had to be back on board by 3:30 for  a 4 pm sailing. We had not signed up for any excursions and Mike decided to stay on board and soak up some sun. Unfortunately there was not much sun to soak up but it was warm, with temperatures between 23 and 28 C.

As the stop in San Juan was so brief, Amanda and I decided on the spur of the moment to take a two hour tour in a 25 seater bus just to get a feel for the city. The guide was good, switching effortlessly from Spanish into excellent English, and presenting a lot of information in a very entertaining manner.

The first stop was the beach area of which he seemed very proud. The waves were high, dashing up against rocks - it did not seem very tempting from a swimming perspective.

It's funny how the mind works. All through the tour of San Juan the line of the song "Nothing" from A Chorus Line kept going round in my head.  It's sung by Diana who is the little Puerto Rican dancer whose audition piece described her acting teacher who tried to get her to "feel the motion"  of sledding down a hill. But she couldn't get it -  "maybe its genetic - They dont have bobsleds in San Juan."  No they certainly don't.

The bus toured us around the newer part of the city.  We  saw small houses that the guide told us were valued at a couple of million dollars - I guess its "location location location" that counts.

Then we drove past the capitol building and up to the old city on the way to Fort Moro.

The driver was supposed to drop us off at the shopping district, about ten minutes walk to the ship, but thanks to a thoughtless and thoroughly inconsiderate family on the bus, who kept everyone waiting for 15 minutes while they wandered around the Fort - it was supposed to be a  brief stop for a photo - we ended up having to go straight back to the ship  as we had a lesson scheduled..

We had booked a lesson with Brian for the three of us to work on leading, following and consolidating some of the sequences we had learned in the workshops and on other trips. We started on samba as Mike and I had been trying to figure out how he would lead from the forward walk into boto fogos and then voltas. I knew how the lead felt to me but I did not know how to show him how to lead  it.  Five minutes of instruction and Brian had sorted  out what we were doing wrong. So now Mike and I have a longer sequence that will work for samba.

Amanda, who had one samba group class at the Vancouver  Ballroom back in the summer, picked it up immediately.  It has actually been quite amazing how she has managed to pick up each kind of dance that she has tried on this cruise. I was thinking about how that happens, and remembering how much harder I found it initially on my first cruise, when I encountered the American social and rhythm styles which were in contrast to what I had been working on for the past two years. Amanda on the other hand was seemingly able to just follow without knowing the steps.

So here's my theory and I would be interested in hearing what other people think about this whole dance  leading/following bit. Firstly she has to have an excellent sense of rhythm - both her dad and I danced from our teens (not ballroom though). Then her physical theatre training and yoga contributes a "body awareness" or strong kinesthetic awareness. Thirdly she is uninhibited by thinking about how the steps go because she has not learned them so she can just respond to leads and weight changes. And then of course we had excellent hosts who had good clear leads and were delightful to dance with. So what I was concerned might have been a bit of a daunting experience for her- a newby dancer coming on a ballroom dancing cruise - turned out to be an incredibly delightful experience. And turned her into a dance addict like her brother and me!

Anyway I digress from our dance lesson. Mike was leading reverse boto fogos and again we needed some help in figuring out the lead and body positions. So Brian helped us fix that and then we worked on the timing of a few chachacha sequences. Specially the timing of some of the syncopated steps was problematic. I need to count "ands".  We first worked on the swivel step that Greg taught on the Asia cruise, then on something Mike learned at his studio's step which was - I think- New York,chachacha , a lock step chacha, a flick, and repeat to the other side. A third one was the step we just learned in the chacha workshop onthis cruise. The timing of the pause and left turn was tough. Luckily I think we did a brief video of each of them to help later in remembering exactly what we learned.  We finished up the lesson by working on a tango sequence. We all enjoyed the lesson a lot and all three of us got a lot out of it.

As we walked back to our cabin we noticed the big New Year Count Down board that was set up in the Club Savoia. it was already counting down the hours till midnight. The whole ship was buzzing.  The crew were preparing for the parties that would occur in each of the different locations with countdowns occurring in each of the lounges, starting at 11 pm.

We got some dancing on before dinner in the Savoia but there was almost more photo taking than dance.

There was a special New Year dinner at our late sitting.

By 10:30 we were in the Savoia lounge which was packed with revelers. The Excalibur Band were playing the rock /disco/group dance sort of stuff in Savoia, there was  Latin music in Da Vinci,  and in the atrium. The places were all packed. So we rocked and rolled until the big countdown at midnight - and then we began 2010 by rock and rolling some more.

I don't know how long the ship's passengers  partied for. I went to bed around 2 and read for an hour because i was too wound up to sleep. Mike and Amanda partied later than that. So I have to admit that despite my aversion for large crowds, my first big New year's Eve party in a decade was lots of fun.

In case you missed the other parts of the Travelblogue:

PART I:     Getting there: Vancouver - Toronto - Fort Lauderdale

A Collage of Pictures from New Year's Eve, 2009 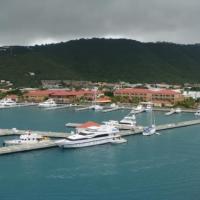 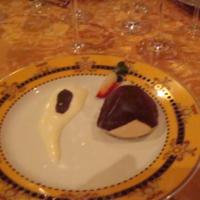 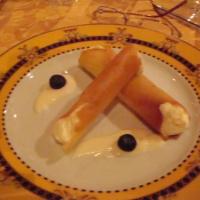 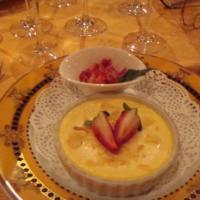 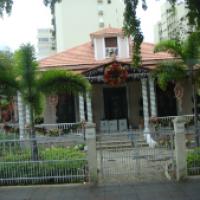 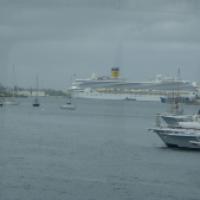 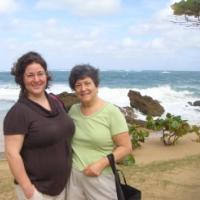