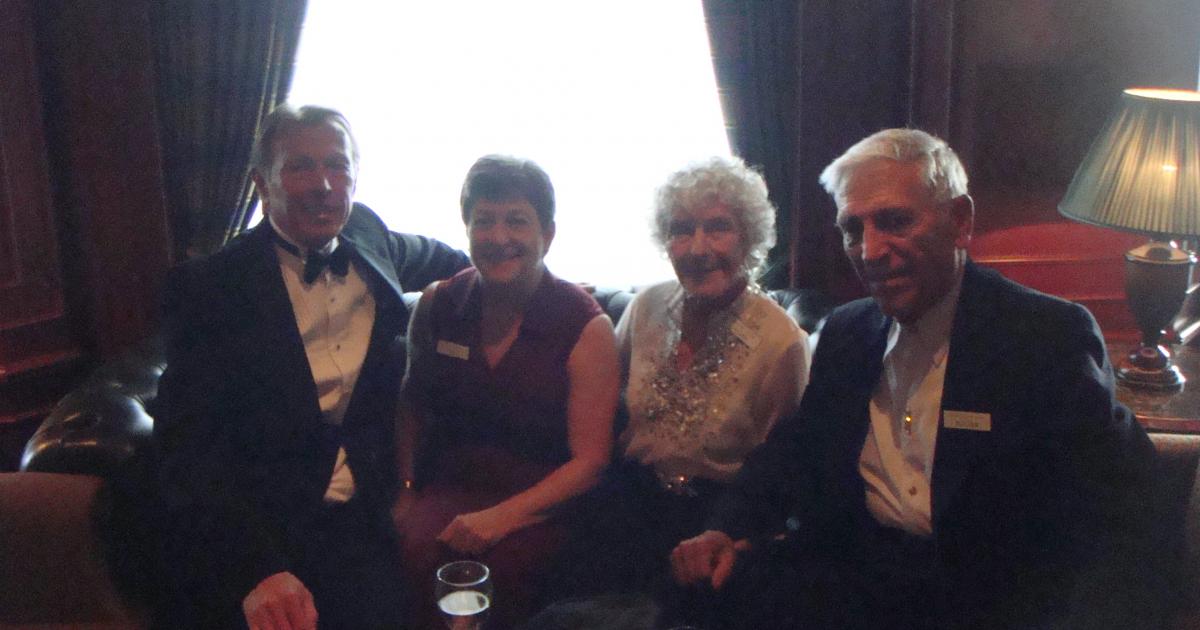 My son is driving me to the Cruise Terminal. We turn it into a family outing so my grand-daughter can see what a really big ship looks like. It's a short 1 hour drive along the highway to the cruise ship terminal at San Pedro from which the Sapphire Princess is to sail. We made excellent time until we got to the last turnoff to Harbor Boulevard where somehow we missed the turnoff. As, far too late,  I yelled "go right, go right" we found ourselves driving onto a very very - yes very - long bridge to the opposite side of the harbor. I looked back with dismay as the Sapphire Princess rapidly receded into the distance.

To make matters worse there was a huge traffic jam on the bridge and  the traffic appeared stalled. I had visions of missing the boat- really. Well, not really - since it was only leaving at 4 and of course we were there hours before.

As the two lines of traffic slowly inched forward and the minutes ticked by, I couldn't help but remember one day on a long ago family visit to Provence, when we were trying to leave Avignon. We kept missing the exit which was admittedly poorly marked and ended up driving over the same wrong bridge at Avignon at least three times. This made it into the family annals of travel stories, remembered with much laughter as our own special version of "sur le pont d'Avignon" at later family gatherings. Well hopefully history won't repeat itself with Keith instead of Bob as the errant driver. Keith assured me, and himself, that it should be simple to do a U turn at the other end and get back to the right exit.

We finally got past a stalled truck which was causing all the problems. the traffic surged and we rapidly found our way back to Berth 93. I handed my suitcase over to a porter and hoped I would see it again sometime soon. And then it was goodbye to kids and grand-kids and time for me to board. Considering the numbers of people that need to be dealt with in a very short time, it all went really quickly and I found my way to my port side cabin. It was great - not too many places for me to misplace things. The only flaw was the paucity of outlets for plugging in my computer and other chargers.

Figuring out that it would take a while for my suitcase to arrive I went off on a quick exploration to check out the Wheelhouse Lounge where we were to meet at 5:30 for cocktails, as well as the gym, and the Spa where I planned to try out a massage on Wednesday. I thought that three days of dance would justify some deep tissue work.

At the Internet cafe I was told that there is wireless internet access in the cabin. “Just load your browser, mam and follow the instructions for payment.” Hmmm... that sounds like it is going to be expensive but I had hoped for the convenience of cabin wireless access for my travel-blogueing so I was happy to get it.

On my explorations I passed the Tour desk where a huge mass of people was lining up to book excursions. I walked by smiling a little smugly to myself.  I had taken advantage of the on-line Cruise personalizer to pre-book the trips I wanted as well as the Spa treatment, so I  simply by-passed the lineup and went back to my cabin.. It pays to be obsessively detail oriented sometimes. At my door I met Alex, the cabin steward responsible for this section, who had my tickets for the two wine tasting excursions that I had booked. My suit case had arrived at my door and I unpacked quickly and headed up on deck to watch the 4 pm departure.

We were delayed by a huge container ship berthing just ahead of us, so I watched the tug boat dancing and spinning around alongside the ship as we all waited to leave.

Finally near to 4:30 the ship began to move. The motion was so imperceptible in the still harbor that it was only by finding a fixed point that one could see the relative movement. I finally tired of watching the progress out between the breakwaters and made my way back to the cabin to change and head up to meet the group for cocktails and hopefully some pre-dinner dancing.

Dancing at Sea: Getting To Know You

My first chance to meet my fellow dancers was the 5:30 Get Acquainted Cocktail Party in the Wheelhouse Lounge. Wendy had said there would probably be around 25 in the group. That meant 24 names to attach to faces. Thoughts of memory techniques from old Dale Carnegie tapes flitted through my mind as I walked upstairs to deck 7.  I think it was he who used to teach a method of remembering several names at once. That is not an accomplishment  that features high in my  skill set.  I wondered whether the Brain Age games on my Nintendo DS or the exercises I got from PBS had done anything for my memory. Probably not since I maxed out at remembering 6 sequences or items in most of the games so far. But I figured that this first meeting would be a good test of whether any of those exercises really work.

The Dancers at Sea group was easy to spot as I entered the Wheelhouse Lounge. They were the crowd seated right next to the dance floor, wearing  Dancers At Sea name tags!  I recognized Wendy from the pictures on the web site and made my way across to the group. Within a few minutes I had met more than six people and my memory banks were being severely stressed – but not to worry. By the next time we met, I was sure that everyone would have imprinted their unique personalities in my mind and names would become permanently attached to faces.

As is often the case whether on cruises or at a dance, the women outnumbered the men by a ratio of 2:1, so there were fewer men's names  to learn. The easiest people to remember at first were the four dance hosts as I had previously seen their pictures and brief biographies on the Dancers at Sea web site. Piero, who teaches in Southern California, and Brian, who has a studio in New Jersey were the professional host / instructors. Both in their mid-twenties, they were fun, charming and full of energy – which they needed to be as they would be on the floor for almost every dance over a three hour period, each night.  Although their teaching styles were very different, both were delightful to talk to and a joy to dance with. I found i could follow them effortless  through a variety of  steps and dances that were new to me.

Raoul and Roger were the other two dance hosts. Although not an instructor, Raoul might as well have been. This cruise, he told me was his 17th as a dance host – and he was equally adept at leading a quickstep or Viennese waltz as a cha cha or swing dance. l learned later at dinner, that this was Roger's first time as a dance host, so for him it would be as much hard work and a learning experience as it would be  fun. However he is an avid long distance cyclist so he probably really fit - dancing for three hours should not be too much of a challenge.

At 6:30 Wendy directed us to the Santa Fe Dining Room where there were three tables reserved for the group. She told us that we would be eating in a different dining room each night and she would let us know which one when we got together for the pre-dinner drink and dancing. Throughout the trip we would get to sit with different combinations of people each night which turned out to be a great arrangement, as I managed to get to know everyone to some extent at least.

This first evening at dinner I met Bill and Sharon, from Oklahoma, Dean from Charleston in South Carolina, Joanie from Prescott, Arizona, Roger from San Francisco, and Brian and his mother, Carrie, from the mid-west. As a novice cruiser, I took the opportunity to get some insights from Dean, seated next to me. I found out that we shared a preference for white wines – particularly Rieslings. He informed me that if one ordered a bottle of wine the waiters would store it and you could retrieve it for your next dinner regardless of the dining room you eat in. You just have to remember where you ate the night before and they have them registered by your cabin number.

I decided to try the Nobilo Sauvignon Blanc from Marlborough, New Zealand. I was a little surprised to find that when I invited my table companions to enjoy a glass of this wine, it generated appreciative comments about my generosity in sharing. I guess I am used to traveling with friends who like to try different wines and always share their bottles. Anyway Dean ordered a bottle of Riesling and I had a taste of that. I really liked the Sauvignon Blanc that I ordered. Fresh, herbal and fruity – it went perfectly with the Barramundi (a type of perch) that I had for dinner. After an appetizer and main course I was too  full to choose a dessert from the sinfully delicious sounding list. The desserts did look tempting and there were appreciative sounds from the various tables but I was impatient to get going on the dance floor and not even tempted to taste. 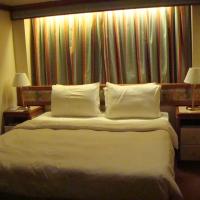 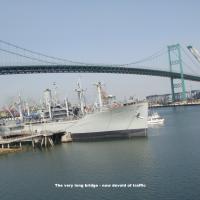 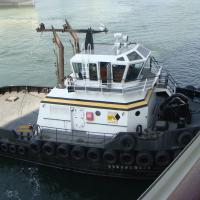 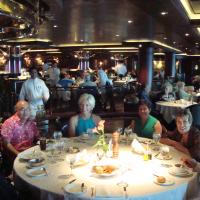 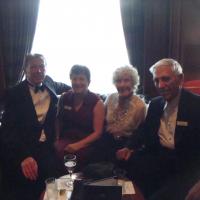