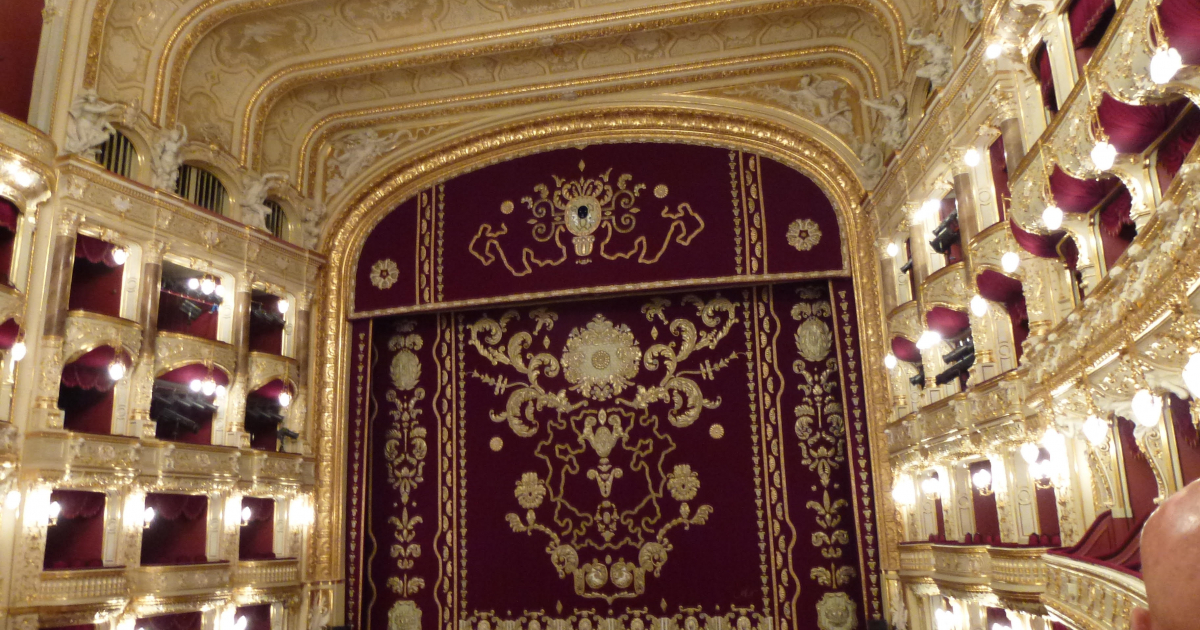 On this Black Sea journey on the MV Aegean Odyssey, the big treat of the stop in Odessa, Ukraine was a private ballet performance by the State Academical Opera and Ballet Theatre for the travelers of the MV Aegean Odyssey, at the Odessa National Opera House. The two-part show consisted of a classical ballet – Les Sylphides (Chopiniana) and The Carmen Suite, a ballet set to a modern adaptation of Bizet’s music.

Les Sylphides is described as a short non-narrative ballet choreographed by Michael Fokine  to music of Frederic Chopin. It premiered in St. Petersburg in 1908 as Chopiniana or Reverie Romantique: Ballet sur la musique de Chopin. In 1909, named Les Sylphides it was first presented at Theatre du Chatelet in Paris. For this production, the backdrop of the stage was black with a white circle depicting the forest glade where white–clad sylphs dance with the poet in the moonlight.

The stark black and white set of Les Sylphides contrasted with the dramatic blood-red backdrop  and geometric look of the set for the Carmen Suite. Based on Georges Bizet’s opera, Carmen, re-orchestrated for strings and percussion in 1967 by Russian composer, Rodion Shchedrin, and choreographed by Cuban choreographer Alberto Alonso, the one-act Carmen Suite ballet highlights the seduction and downfall of corporal Don Jose by the fiery gypsy Carmen. The first Carmen to dance this role was the Russian ballerina, Maya Plisetskaya, (wife of Shchedrin) who had first conceived the idea of dancing Carmen in a ballet. It premiered at Moscow’s Bolshoi Ballet in 1967.

The ballerina dancing Carmen in our performance was awesome in her ability to make the tiniest shoulder roll or an extended leg into a gesture of seduction. I loved the toy-soldier like choreography of the duets of Don Jose with his boss, and the flamboyance of the bullfighter, Escamillo with whom Carmen betrays Jose.

Truly this was an incredible treat. And even better, I scored a seat in one of the boxes, centre of the house in the first tier - the Royal Box maybe? These two photos were taken and kindly sent to me by Bob Long, a fellow Aegean Odyssey traveller who turned out to be from North Vancouver - just across the bay from where I live.

The interior of the opera house is quite stunning. It has 1606 seats with three tiers of boxes.
In the dome of the ceiling there are pictures representing 4 of Shakespeare’s plays – Midsummer Night’s Dream, The Winter’s Tale, Hamlet and As You Like It.

We were told that the quality of the acoustics ranks this opera house with the other top European opera, ballet and theatre houses – La Scala in Milan, Covent Garden (London), Grand Opera (Paris) and Vienna Opera House. Tchaikovsky’s “Queen of Spades” premiered in the Odessa Opera house with himself conducting. The orchestra presented him with a diamond-tipped baton – “to an immortal from mortals”.

When the buses arrived back at the ship for a 9:30 PM dinner, 350 passengers converged on the gangway simultaneously. The lineup looked horrendous and moved at a snail's pace. Observing this, Robert, Carol and I decided to walk back to the Potemkin Steps and find a restaurant in the town where we could eat local food.

We sat down at a rather unprepossessing place. I was dubious but Carol was attracted by the large Ukrainian plates displayed on the wall – and her instinct was correct. At the Varenik Café, the food was surprisingly good. We shared a roasted beetroot and soft cheese salad with arugula and olive oil, which was delicious.  I enjoyed a mini-pita lamb kebab with seasonal vegetables – tasty and nicely cooked but very heavy on the raw onions!

Afterwards we walked back down the Potemkin steps to the ship. No lineups to enter! It was a full day and I was ready for my comfy bed in my cosy cabin. 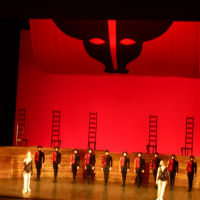