Amazon River Expedition: My night in the Kapok Camp 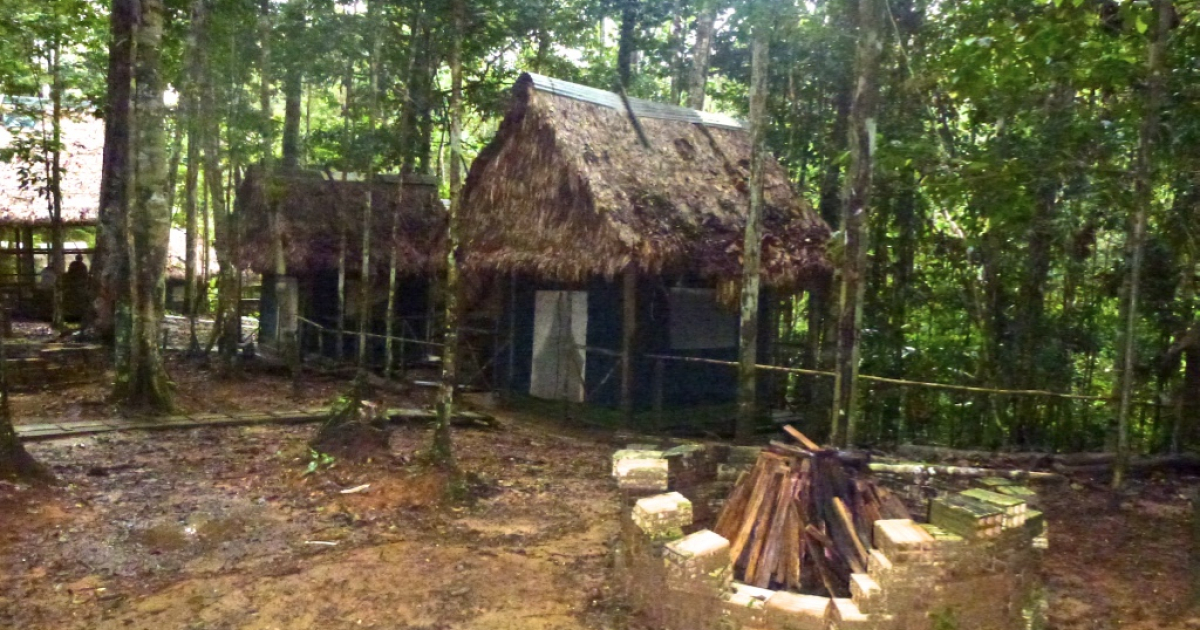 Amazon River Expedition: My night in the Kapok Camp

It’s 23:40 according to my glow-in –the dark, battery operated alarm clock. I have been sleeping fitfully since around 10 PM, tossing and turning under a thin sheet on the narrow camp bed in my tent in the Kapok Camp. The tent is square, approximately 12 x 12 ft., and is covered with a thatched roof.

In the cabin to which I was assigned there are two camp beds against each side, with a low wooden table made out of segments of tree trunk separating them at the head of the bed. At the foot of each bed is a wooden block the width of the bed, so there is a raised surface to put your things. The entrance to the tent is an inverted T zipper system. I have it tightly closed to prevent any creepy crawlies paying me a visit in the night.

Inside the tent it is warm, very very warm. Actually it is hot as Hades and I ended up opting for bare skin under the sheet, and hoping that no sudden emergency like a bat or a giant moth flying around the cabin would result in my fleeing nude out of the tent, shrieking like a banshee.  Luckily the interior appeared insect-and rodent/mammal-free, and I had settled in peacefully, listening to the symphony of night creatures, led by the humming of the cicadas, and punctuated by what sounded like gunshots, but as I found out next morning, were actually fruits falling from the trees.
And then suddenly the symphony stopped and was replaced by the sound of a torrential rainfall beating down on the tent sides. I lay there enjoying the sound of the rain, and listening to the occasional roll of thunder. The downpour waxed and waned in waves, easing off and then again beating hard against the tent. A tropical downpour I thought to myself, like the afternoon rain storms we used to have back when I lived in Pretoria, South Africa. Probably it will last about an hour or so and then stop.

But the rain went on and on.

I became aware of the intense itching from insect bites on my feet and knees. Inside the tent it is very black. There are no lanterns but I have an excellent flashlight, small, light, rubber casing with a very bright torch, so I fumble for the flashlight, and dig in my back pack for the topical Benadryl stick I brought with.  I place the flashlight back on the table and get back under the sheet.

That’s when I become aware that the increasing pressure in my bladder that I had been trying to ignore had reached danger point. I felt it was about ready to burst. What to do?
As the description of the Kapok Camp had promised, adjacent to each individual tent was a second, washroom structure that contained a “western” style toilet and a sink.  My “western “ style toilet was missing a toilet seat – probably stolen by poachers as Robinson told me next day. No big deal – this is the middle of the Rain Forest after all and even having a flush toilet should be considered luxury.  However to get to this luxury  I would have to get dressed, put on my boots, find my tent-like poncho, and then using a flashlight, try and get down the very slippery ramp to the washroom without slipping and hurting myself, in the torrential rain. Hmmm. Could not face it. And what about that neighboring  tarantula? (see previous story).

By now I was beyond desperate when suddenly a light bulb went on inside my head. On the table next to the bed was an empty water bottle. Not having the convenient equipment that men have (I guess you could say in this situation I had an acute case of penis envy), I wondered could I possibly be accurate enough to fill the water bottle? In the dark!  Being one person in a cabin for two I had the luxury of an extra towel on the other bed, so I gingerly placed the folded towel on the floor, laid some tissues over it, grabbed the bottle and thought back to the times I had to pee into a plastic container for urinalysis. And what do you know? After what seemed like an interminably long time,  my flashlight revealed a 3/4 full  bottle and minimal splash on the tissues. What a relief. I poured a little water on my hands from another full bottle and dried them on the other towel, and climbed back into bed. By now it was around 2 am.

I wriggled around to find a comfortable spot on the camp bed, snuggled into the sheets and once again relaxed to the sound of rain beating against the tent.  Until I became aware that another note had entered the water symphony. Drip drip drip.  I poked my head out from the sheet and realized that my pillow was damp... that's a charitable way of saying WET. I shone my flashlight upwards seeking the source of the drip.  Could not see one strong drip. Anyway I decided to move my things over to the foot of the bed and switch beds. Just got myself organized when I realized that this side was even wetter.

Oops. Well I figured that the rest of me was damp anyway from sweat so a wet head would not make any difference and I got back into my original bed and tried to doze off. When my alarm went off at 6 am I was out of bed in a flash, pulled on my utterly gross, damp, Deet coated clothes, boots and put on the leather protectors and after a pit stop to empty my "water bottle" and refilled bladder into the toilet, headed down the slippery path to a very welcome cup of coffee. 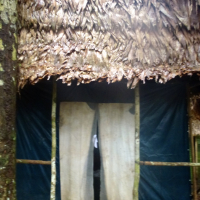 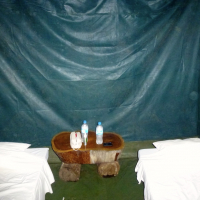