Vancouver, BC: Led by two Studio 58 alumni, director Anita Rochon, and Mike Wasko as the insanely jealous  Sicilian king Leontes, the student cast succeed in presenting a interesting and entertaining production of  The Winter's Tale. I use the word succeed deliberately because as I look back on my  reviews of other  productions of this play (Winter's Tale, Summer's Storm), I note that this play in more ways than the conventional meaning for me is a problem play, and it is a real challenge to pull it off well.

The problem lies with Shakespeare, not with whoever happens to be playing Leontes. The entire premise centres around the sudden irrational jealousy of Leontes that leads him to accuse his wife Hermione (Melissa Dionisio)  of adultery with his childhood friend, Polixenes, Prime Minister of Bohemia  (Jason Clift) who has been visiting Sicily for the past months.  Since the text begins with a cordial Leontes pleading vainly with Polixenes to tarry a few days longer in Sicily, and then within  a few minutes of observing his wife succeed in her plea to have Polixenes stay, turns Leontes into a maniacally jealous man, it requires a huge leap of faith for the audience to follow Leontes down his path of lunacy.

However on my part it required no leap of faith to empathise with the anguish and betrayal felt by Hermione. Dionisio was quite luminously beautiful as the joyfully pregnant Hermione and her transformation to unjustly accused victim was very moving. Strong  performances from Gui Fontanezzi as Camillo, right hand man first to Leontes and then Polixenes, from Kirsty Provan as the feisty and fearless Paulina, and Clift as the honest but falsely accused friend also effectively moved the tale forward.

The second half of the play switches from tragedy and betrayal to lighthearted romps through rural Bohemia, where the hapless Antigonus, sixteen years earlier (before getting eaten by a bear !) had left Hermione's daughter, Perdita (Gili Roskies) on the shore. There she was found by a shepherd (Byron Noble) and his son (Raes Calvert).

A party at the  shepherd's house gave the cast  the chance to dance, sing and have fun but  the highlight was the antics of Autolycus, peddlar, rascal, thief, played to great effect by Benjamin Elliott.  Of course, Perdita gets together with Florizel (Graham McComb), Polixenes' son,  and  the repentant Leontes reunites with  an older and more wrinkled Hermione.

Rochon chose to set the play in a semi-modern setting.  Rather than a kingdom, Sicily resembled some sort of  grey and dour Eastern European country. The messengers to the Oracle at Delphi were dressed as Russian cosmonauts - much to the appreciation of many in the audience. I was not sure how much of the music, sung and  chanted in words I could not identify, were original compositions by  Alison Jenkins but it was very effective in evoking a sense of alienation and foreignness. The costumes by Marina Szijarto were also effective in demarcating the severe bureaucratic aspect of the Sicilian environment from the happy hippy feel of rural Bohemia.

It's a strange play - part heavy drama, deep emotions, death and despair; and part light hearted comedy, clowning  and fun. But The Winter's Tale ends happily ever after and there is lots to talk about in the story, making it an excellent choice for a holiday season play. 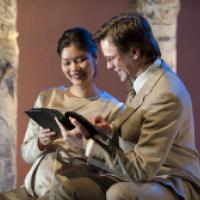 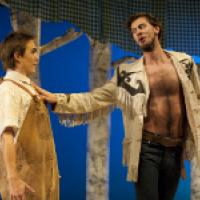