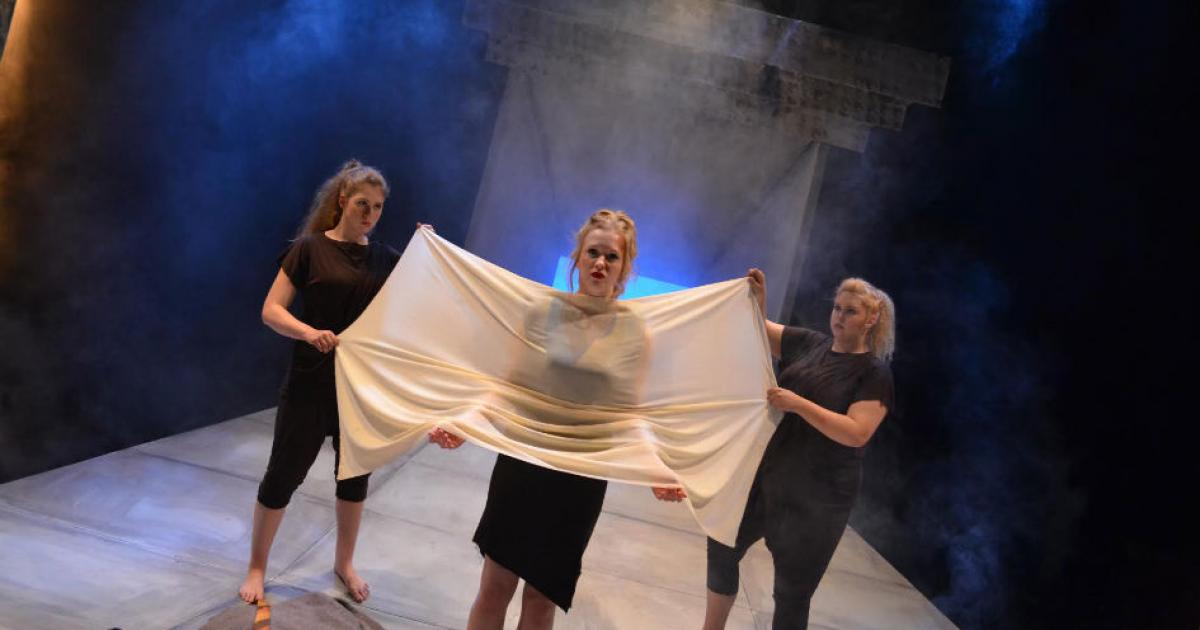 Trojan Women by Charles Mee
based on the original play by Euripides
Directed  by Thrasso Petras
The Department of Theatre, Stagecraft and Event Technology
Douglas College, New Westminster
20 to 27 March, 2015

Vancouver BC: On a miserably cold, rainy night we took the Skytrain from downtown Vancouver out to Douglas College in New Westminster. We went to see a student production of Charles Mee's adaption of Euripides' The Women of Troy. I was overjoyed to experience a production that was so much a visual and auditory delight that it made our sodden trek out to New Westminster more than worthwhile.

Euripides' The Women of Troy describes the fate of the women of Troy, waiting to learn their future after the capture of the city by the Greek Army. Hecuba , widow of Priam the Trojan king, her daughter, Cassandra and daughter-in-law Andromache, and the women of the Chorus, were captured and kept prisoner amidst the ruins. Also appearing is the wife of Menelaus, the beautiful Helen, whose elopement with Paris, nine years earlier, was the excuse for the Greeks under Agamemnon to invade Troy.

Hecuba learns that the virginal Cassandra will become the concubine of Agamemnon and that Polyxena her youngest daughter has been sacrificed to keep the dead hero, Achilles, company in his tomb. Helen is brought in to be confronted by Menelaus who will determine her fate; death or as she pleads for, a return to Sparta and resumption of her life as his wife.

In Mee's (re)making version of Trojan Women, the underlying concept of the human spoils of war is universalized from the context of post-war Troy, by overlaying text from survivors of catastrophic human destruction; Hiroshima, the Holocaust and descriptions of rape, murder, torture of recent and contemporary wars.

Director Petras whose work is deeply rooted in physical movement and voice, created an emotionally moving yet exquisite piece of theatre with outstandingly synchronous ensemble choreography and a subtle soundscape of breath and voice, underlying the spoken text. The jarring effect of the introduction of modern music sung by Judy Garland, Holly Cole,  Doris Day and Sinead O'Connor brought one back from the almost calming tableaux effect of many of the scenes to the reality that war and its aftermath is not just something that happened in history.

There were many strong individual performance but  a standout for me was the performance of Allie Melchert as the once powerful Queen Hecuba, now rendered powerless by the might of the soldiers of the conquering army.

I really enjoyed the show. Definitely one of the most moving student productions I have seen. It's probably been two decades since I last saw a show at Douglas College when my daughter studied Stagecraft but I look forward to seeing their future productions.