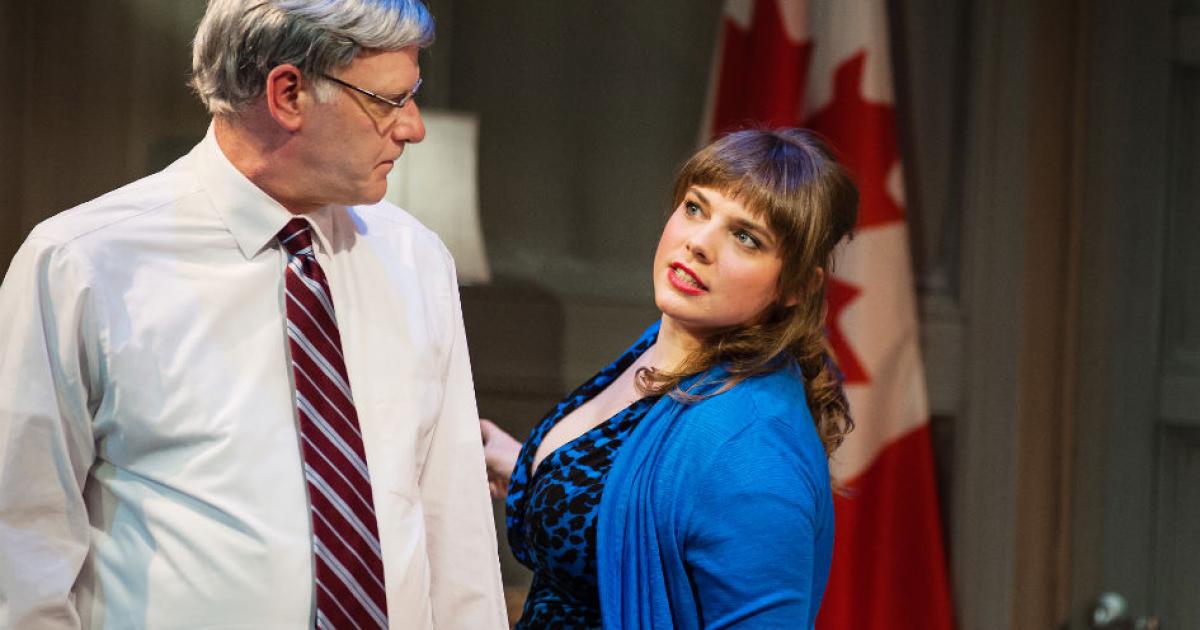 Vancouver, BC:  I missed last year's run of PROUD at The Firehall so I was happy to be able to get to the opening night of this 2015 run of PROUD. Although, knowing it was a political comedy about Stephen Harper, and being far more of a fan of Harper than a detractor, I confess I was a bit apprehensive that this would be a carping diatribe against our Canadian PM and his policies.

Was I wrong!  Michael Healey has written a clever, very funny political satire. His script shoots verbal arrows that skewer his target dead on yet don't leave nasty bruises. The portrait he paints of Harper, brilliantly brought to life by Andrew Wheeler, is acute and pointed  but never mean. As for Wheeler, who in costume, looks eerily like Harper, of all the many roles I've seen him in, this has to be one of his best. He wears Harper's demeanor like a second skin.

The premise of the play is that in the last election Harper's Tories won a huge majority including most of the seats in Quebec. The problem Healey poses for the PM becomes how to micro-manage a house-full of MPs who naively think they are actually supposed to represent their constituents, rather than merely vote the party line and NEVER talk to The Press.

Enter Jisbella, an unexpected winner of a seat in parliament, who takes literally the PM's exhortation to come to him with any problems. Played by Emmelia Gordon with an energy and intensity that is a match for Wheeler,  Jisbella is a feisty, raunchy single mom of a young son,  Jake (Daniel Doheny). I appreciated the multi-layered construct of Healey's protagonists and the nuanced interpretations by Wheeler and Gordon, shown in the phone interactions with the young Jake. The brief scenes of the adult Jake being interviewed as a young election candidate, adds another layer to the imagined portraits of the PM and his unconventional MP. Obliging and compliant in the revolving door position of the PM's Chief of Staff, is Cary (Kyle Jespersen), charged with getting the PM's plans carried out, no matter what.

Overall - I loved the show and laughed a lot. Regardless of where on the political spectrum you fall, make sure you catch PROUD during this run.

And for a pre-show dinner, we enjoyed a light supper at Belgard Kitchen, a mere two  blocks walk away from the Firehall Arts Centre. Check it out too.