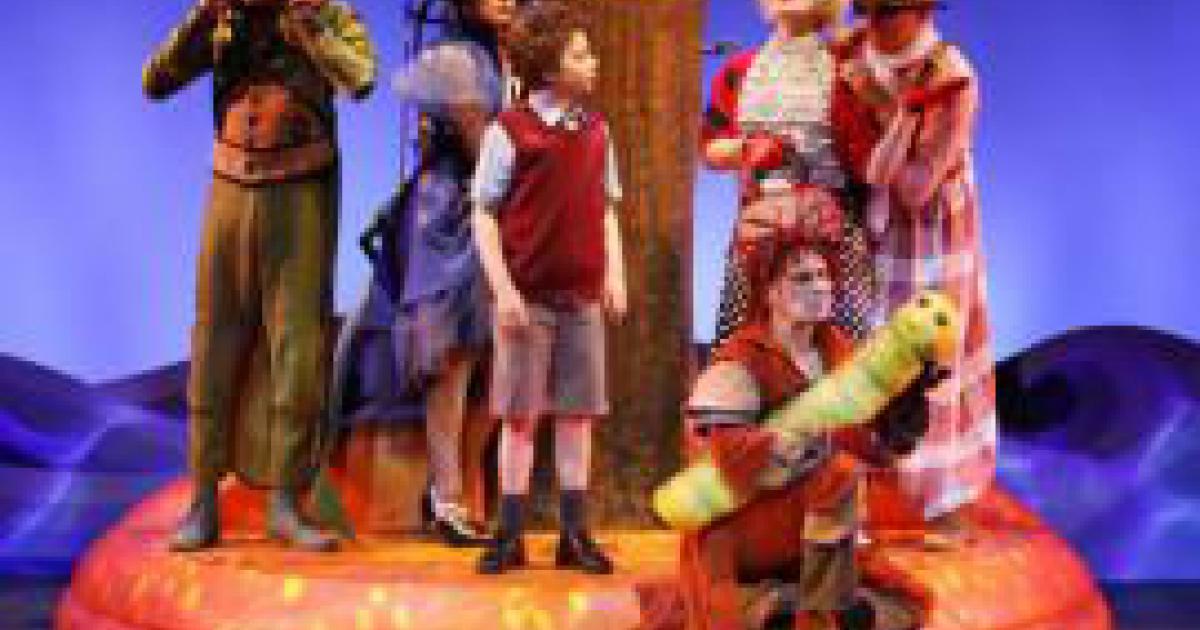 James and the Giant Peach
Based on  the book by Roald Dahl
Book by Timothy Allan McDonald
Words and Music by Benj Pasek and Justin Paul
Carousel Theatre for Young People
Waterfront Theatre, Granville Island
Dec 6, 2014 to Jan 4, 2015

Vancouver, BC: Carousel Theatre's James and the Giant Peach is a visual feast to delight everyone from wide-eyed six year olds to their misty eyed grandparents. The design team of Al Frisk (Set), Lights (Gerald King), Puppets (Annett Mateo) and props (Heidi Wilkinson) have created an playing space filled with a riot of bright bold colours and objects,  in which Barbara Clayden's charming and imaginative costumes still succeed in standing out. The John Fluevog shoe junkie sitting beside me was casting looks of envy at the feet of the Bugs, clad in gorgeous Fluevog footwear.

The musical tells of the adventures of James Henry Trotter, a young boy living in an orphanage because his parents were eaten by an escaped rhinoceros. Taken to live with his only remaining family, wicked aunties Spiker (Patti Allan) and Sponge (Deb Williams), James encounters a mystery man who concocts a magic potion to help him. But things go badly wrong and James finds himself at sea on a giant peach with a collection of bugs:  Centipede (Scott Bellis), Grasshopper (Alex Rose), Earthworm (Jonathan Wimsby - who also plays the mysterious Man), Spider (Maykayla Moore) and Ladybug (Kaylee Harwood).

James is played by young Julian Lokash with the confidence and aplomb one would expect of an established actor. He put heart and soul into being James and it shows.

The Bug ensemble were terrific together and each one had a special trait that embodied the insect they played. I loved Centipede's wiggling finger gestures and disgruntled Irish character- With just 10 fingers Bellis managed to conjure up an image of 100 waving feet; Grasshopper's fiddle evoked the vibratory sound of leg rasping against wing. Spider's filmy costume and her agility conjured the image of the lightness of a spider scurrying over its web.  Lady Bug was elegant in her polka-dotted outfit, kind and haughty at the same time like a cross between Mary Poppins and Countess Grantham of Downton Abbey.

And I couldn't take my eyes off Earthworm singing "Plump and Juicy." In my own dance practice I'm slowly learning how to embody the unique character of each dance through expression as well as movement. Watching how Wimsby expressed the interplay of fear and Earthworm's growing courage through voice, facial expression and movement was especially enlightening for me. Can't wait to see that number again when I bring my grand-kids to see the show over Christmas.

There are scary concepts for young kids in this play -  loss of parents, wicked bullying aunties - but Carol Higgins' experience in directing for young people shows in how the scariness is minimised.  By playing Spiker and Sponge as over-the-top baddies, Allan and Williams make them sooooo wicked that even a six-year old can comprehend that they are more comic than cruel.

Loved the show - take your kids and grandkids. I'm taking mine.

The show runs till just after the New Year. For ticket information check the Carousel site. 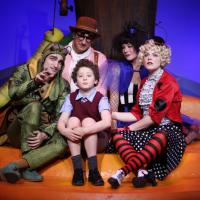 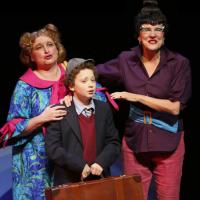