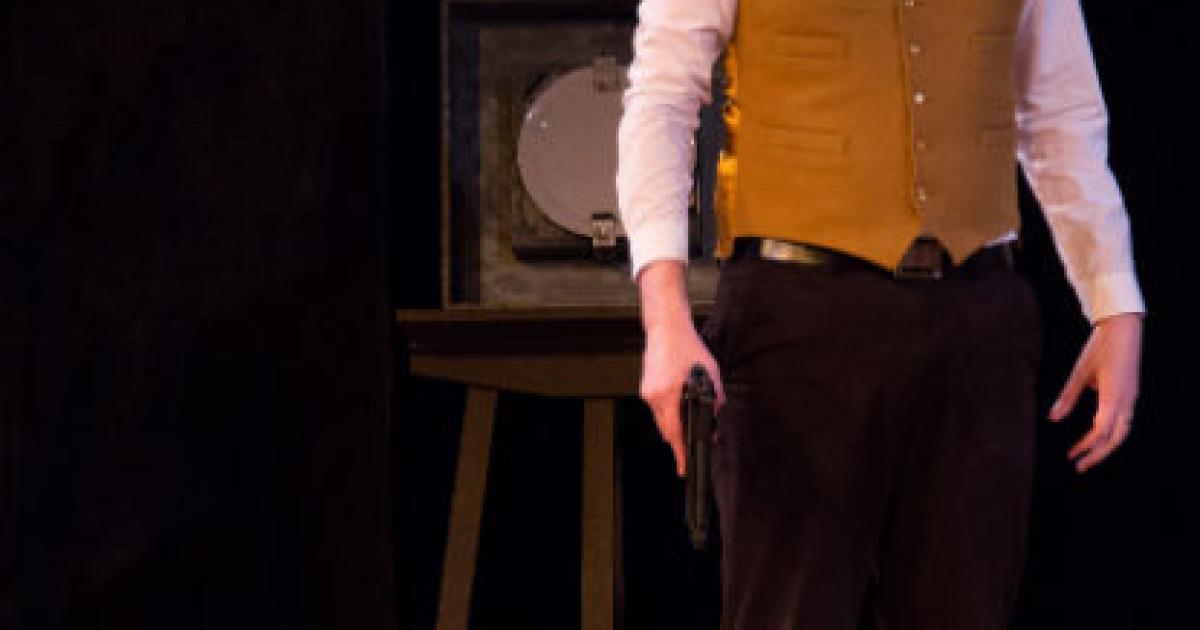 Vancouver, BC: The infamous, occasionally lethal Bullet Catch is an illusion or magic trick in which the performer "catches" a bullet fired directly at him/her in the mouth or hand. Using the story of one such lethal performance told through notes from the man who unwittingly fires the fatal shot, Rob Drummond has created a performance piece for two people.

He selects his playing partner from among audience volunteers by observing their responses to his questions, demonstrating his "mentalist" skills. This person is on stage throughout the remainder of the show. According to the program notes Bullet Catch has been publicly performed over  100 times, which means he has worked with over a hundred different  participants. This must be quite an intriguing experience for a professional actor as the dynamics of the interactions must vary so much even within the framework of the script.

It's interesting also to note that in the same way that he trained as a wrestler for an earlier work, Drummond trained as a magician for the creation of Bullet Catch. Quite an advance on the "write about what you  know" concept, to go out and learn something so different and I imagine difficult.

Having selected his volunteer, Drummond proceeded to build confidence and trust in his subject, leading up to the final dramatic moment when she was given the chance to accept or reject the task of firing the bullet at him.  He also offered the audience  an opportunity to leave the theatre before the final scene. To my surprise someone actually did. Really? Yes really. We wondered if he was a plant.

I confess that I love to watch "magic shows" and find the mind-reading parts most interesting. On a recent cruise I took, one of the featured performers was a mentalist, who in a 45 minute show managed to correctly guess all sorts of amazing facts that the subjects later said they could not imagine would ever be guessed correctly.

I know that there are certain illusions that can be learned, and that body language and facial minutiae give away a multitude of other information.  I would enjoy the opportunity to test one of these performers out. But as we left the Revue Stage after the show I was asked whether I could have pointed the gun at Drummond and pulled the trigger. I knew that regardless of my rational mind telling me it's just an illusion, I couldn't have done it, which is why I didn't volunteer this time.

Overall Drummond is a comedic, engaging performer who puts on a grand show. His Scottish accent evoked fond memories of my Glaswegian grandmother. Another plus for me.