[Re]View From The House: The Velvet Edge 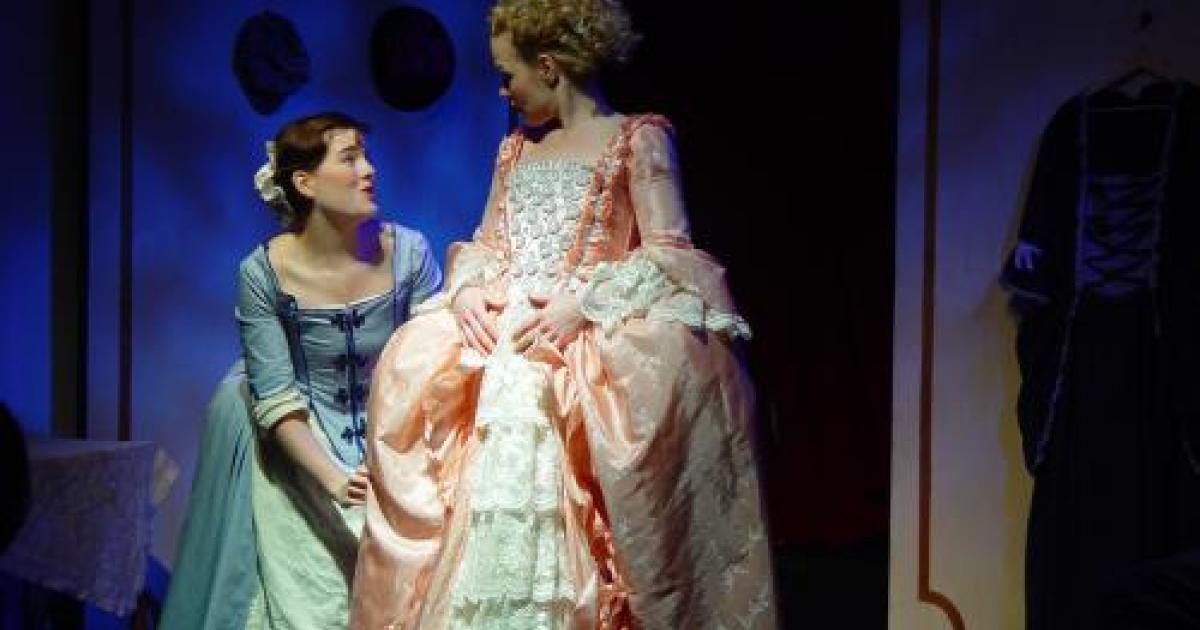 [Re]View From The House: The Velvet Edge

"Cast of The Velvet Edge: Photos by Michael Methot"

Vancouver, BC
Spectral Theatre Society boldly declare in their program that they make "theatre for people that hate theatre. " Hmmm...     I have not seen any of their previous productions so I sought further clarification in the program small print. It said  "To breathe new life into the fetid rotting corpse of live theatre by thrilling and chilling audiences with fantastic stories delivered in unpredictable and innovative ways." Well, okay.  I thought  would perhaps ignore the comment on the state of live theatre - and ask if there was a single phrase that could encapsulate Spectral's niche. I got it - "theatre of the macabre."

Thus primed to be thrilled, chilled, surprised and shocked, I wandered into the theatre space to explore. This was my first visit to the Chapel Arts Centre. The Chapel hall was smallish, maybe 5 rows of seats in two sections. I took a seat that I thought would provide a good view, on a pew in the back row elevated section .  The set,  designed by  Blake Drezet (also playwright and co-director) looked promising. Stage left - grey brick walls with a door insert demarcated what looked like a cell- later revealed to be in Bedlam,  London's original  insane asylum.  Stage right became many different locations as the play progressed.

The occupant of the cell turned out to be "old" Percival Wilkes (Simon Hussey), once a successful poet, but now locked up in Bedlam since the disappearance and apparent murder of his wife Sarah (Bonnie Girous) on an ill-fated visit to Versailles. He is under the "care " of creepy Doctor Marlowe (Desmond Hussey), who interrupts Wilkes' solitude to bring him a visitor, Theodore Trueman' A writer, Trueman wants to write a book about what happened on that fateful trip. Hopeful that someone will finally believe his story, "old" Wilkes cooperates and narrates the tale, which is acted out as a series of "flashbacks" on the other half of the stage, by the rest of the cast.

As Wikes tells it, through the intervention of  his friend, Pierre (Derek Bedry), "Young" Percival Wilkes (Michael Cope) and Sarah are invited to France, to the city of Versailles. There they encounter the wealthy Davous family, the Count (Seth Lttle),  Countess (Lori Watt)  and daughters Marie-Julie (Erin Puckey) and Rosell (Crystal Sevigny). We soon learn that this wealthy, ostensibly hospitable family are really committed hedonists, in thrall to an ancient evil power from Babylon. Despite dire warnings, Percival takes Sarah to a  party at the Davous Chateaux, where they get caught up in the orgiastic activities.  Warning - there are scenes of nudity, as well as a sighting of the evil power, manifest as a grey- black  amorphous looking creature  with tentacles and many glaring red eyes. The evening does not turn out well for either Sarah or Percival.

The best aspect of this production  of this show is the costuming by Naomi Lazarus, especially the exquisite dresses as shown in the pictures.  However the play itself did not meet the promise of  thrill, chill, surprise or shock.  Theatre of the macabre?  I guess so.  But the enthusiastic energy of this very large cast, fifteen in all, could not overcome a script that needs some serious dramaturgical input.

he device of narration by "old Percival" followed by  dramatization wore thin by the second act,: and crazy  Percival's refrain  that no one will believe him came through loud and clear the first couple of times. I  figured out the shock ending fairly early on. While I was pleased to see that the expectation built up actually materialized, the effect of surprise was lost. So no shock and awe!

I also have a  minor quibble re sightlines. Whenever old Percival sat, lay or writhed on the floor of his cell, he could not be seen from the seats at the aisle end of the raised back row. 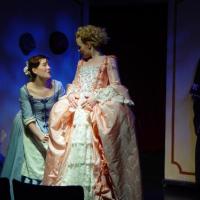 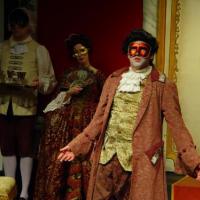 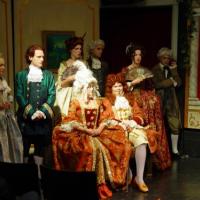