Review From The House: True Story

Review From The House: True Story

Vancouver, BC: It's a beautiful sunny day in Vancouver. Since I arrived home yesterday from my Dancing at Sea Cruise (three hours of dance each night and an average of 5 hours sleep) I have barely had time to unpack. I have 6 days of travel writing to finish and a busy evening ahead. But before I left two weeks ago I had committed to attending the 2 pm performance of this show so I hopped in my little car and cruised over the Georgia Viaduct to The Vancity Culture Lab at Venables and Victoria Drive. And I am glad I did.

I found Murphy's play wickedly clever and entertaining. The story - you have to tell a story, right? - ostensibly revolves around a mother whose 4 year old daughter disappeared twenty years ago, and who still clings desperately to the hope that she is still alive somewhere. At least that's how the play is advertised. But it is not as simple as that.

The first wrinkle arises when I pick the program from the ticket desk. Having carefully read the media information provided I know that there is a cast of at least six actors, and a script written by Murphy. But this program features only an actor and an actress who are "intuitive improvisors" that will interpret the unfinished stories of the audience. Oh oh! someone is playing with our minds.

I puzzle over this for a bit but then get distracted by entering into conversation with two engaging women seated next to me. Visiting Vancouver for a week from Michigan, they are here to see a play, rather than out walking in the sunshine. I love that. We get into talking about what is on at present and the folks in front of us interject. Turns out they are cast members from "36 Views" currently playing at Jericho. They encourage our new friends to check it out. I mentally check my calendar. This being one week when I don't have ballroom dance lessons on four evenings, I'm already scheduled to see plays on Wednesday, Thursday, Friday and Saturday and "36 Views" finishes this weekend. Hmmm...

It's shortly after 2 pm and the play is about to begin. The lights go out. It's absolutely black... and it stays black..interminably. It is probably only a minute or so in reality but you can feel the discomfort developing in the audience. Coughs, shuffling... and then a voice from the audience (Scott Bellis) begins to riff on experimental theatre, art and story telling. I am totally caught up in this. As one who is "guilty" of preferring a strong and interesting plot or story line in the plays I see, I wriggle a bit in amusement as his monologue continues. Love it.

The lights go up on The Actress (Kayla Deorksen) and Actor (Sebastian Kroon) who interpret his story as he invents it, only to be interrupted as other characters bring forward their version of events. Whose truth is "The Truth"? Twist follows twist and it's like being at a tennis match as Mother (Tallulah Winkelman), Jason (Michael P. Northey) and Brenda (Gina Chiarelli) bring out their versions of the story.

For most of the time I find I am completely involved in this play- Winkelman and Chiarelli deliver such powerfully emotional performances that it is hard to distinguish reality from performance. This is part of what Murphy is trying to explore as audience becomes actor and actor slips into spectator role. Each member of the ensemble delivers a strong performance and the whole melds seamlessly into a fascinating bit of theatre.

But then things begin to change quickly and as corpse after corpse is strewn on the floor, I begin to distance myself from the story. Is this intended as a parody on melodrama? I hope so. The significance of the final scene when eight nude actors move as a macabre ghostly chorus, with a powder- coated Kroon very prominently displayed centre stage, was lost on me. More parody? But why? Didn't get it.

On the way out we are handed a copy of the real program. I leave the theatre vacillating between opposing emotions. If Murphy is exploring the power of story and at the same time mocking the ever present demand for a strong story line by looking at how theatrical excesses play out , then the work as a whole for me succeeds well. If I have totally misinterpreted the latter half of the play and the field of corpses were intended to be "true" endings to the story .. well suffice it to say as stabbing followed gun shot I found myself chuckling rather than gasping in horror.  So in that case it did not work.

However bottom line is I enjoyed this production. Unfortunately I did not get to see it till the penultimate show. But hopefully John Murphy (or others in the cast) when you read this, I hope you will comment on my perspective of this play. It would be great if you would address the issue of the last part of the play - and start a dialogue. For me that's part of developing as a reviewer and as a playwright I would think it might be interesting to learn how an audience member interprets or misinterprets your intent. There's a challenge. 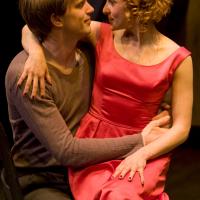