Review From The House: Miss Julie 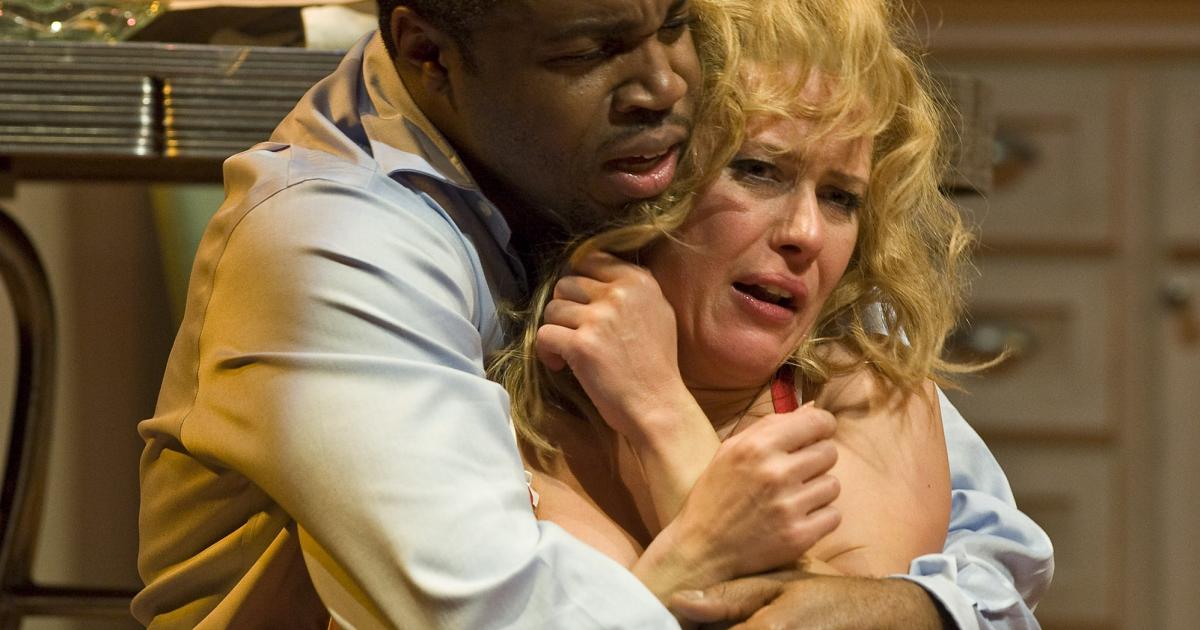 Review From The House: Miss Julie

Vancouver, BC: I have been trying to figure out why I was having so much difficulty committing my thoughts to screen with respect to this production. I was certainly blown away by the performances of all three actors and my attention did not wander for a second from the stage. It  was a very powerful bit of theatre. Yet I hesitated so long in writing about this play that it has become a commentary on me rather than a review.

My initial opening line for the review, typed within minutes of returning home went something like this : " If you are already on an anti-depresssant you might want to take a  double dose to fortify yourself before you go to see this new adaptation of Strindberg's decidedly downbeat  play, Miss Julie."  But then I thought that 's not really fair - it is an excellent production and the fine performances are well worth seeing.

So I delayed,  procrastinated, deferred, dilly-dallied, shilly-shallied, stalled, postponed,temporized - oh yes, I even found myself looking up synonyms for procrastinating - how's that for an avoidance strategy -   and finally , faced with the prospect of four plays and two events to cover in the next twelve days in  between dance classes and keeping up my resolution to learn a little bit of Spanish every day - have metaphorically chained my self to my ergonomic chair and my fingers to the computer keys and set out to find the source of my psychic blocks.

Perhaps it has something to do with growing up in apartheid South Africa. Stephen Sachs  transposed Strindberg's tale of lust and power across gender and social class lines from late nineteenth century Europe to  Mississippi  just after the signing of the Civil Rights  Act in July 1964. This made the issue of inter-racial sex dominant..

In Sach's vcersion, MIss Julie (Caroline Cave) the white daughter of a plantation owner/ judge, having been spurned by her fiance, sets out to seduce John (Kevin Hanchard), her father's black chauffeur, in the kitchen of the plantation mansion. Caroline Cave (Miss Julie) is simply brilliant as she taunts and plays with John's  mind and body. She seduces, commands, beckons, repulses, switching on a dime - a superb portrayal of the hysterical female, simultaneously fascinated and repelled by the masculine sexuality of the servant.  Hanchard matches her in the intensity of his performance. The third and only rational character in this scenario is the cook and John's fiancee,  Christine sensitively played by Raven Dauda. She reminds them of the fates,  like lynching,  that may still await a black man who touches a white woman, despite legislated new rights conveyed by Lyndon Johnson's newly signed Civil Rights Act. But as Julie and John engage in a sexual power struggle, Christine,  because of her social position, race and gender, is powerless to intervene in this tragic death dance in which noone can win.

Strinderg's original play is  certainly not light reading but  I left this production admiring the performances yet wanting to borrow Miss Julie's knife! or take Prozac!   We moved to North America from South Africa so that our children would not grow up  in an apartheid environment.  Sachs sets this play in 1964, less than a decade before I left South Africa and life for American blacks was even more violent in  the American South  than in South Africa at that time. In post-apartheid South Africa,  violence is stll a way of life  though less inter-racial than black on black,  particularly in the sprawling black ghettos of the townships. I think this play got me thinking how far South Africa has come on the surface, yet how violence and danger is a still an ever-present  threat for much of the population.  On the other hand,  a friend pointed out that she found the play most uplifting, because it spoke to her of  how far America has come in forty years with the election of President Obama.

I guess that's the power of theatre. It taps our deepest emotions -even those we thought long suppressed.