Review From The House: Les Miserables

Review From The House: Les Miserables

Vancouver, BC: How can one not love Les Mis? The book  has everything - Sympathetic downtrodden characters who  either  triumph over adversity or die tragically with their dreams unfulfilled; a good guy chasing a bad guy  where the bad guy is really good at heart and the good guy 's obsession with his quest is bad;  student protests with dramatic deaths on barricades, and of course, the wickedly funny  innkeeper and his wife. Then there is the music - songs to make you cry, songs to make you laugh, catchy melodies that tumble over each other for a place in your head; and that you hum as you drive home after the show.  I first saw a touring production of Les Misérables in Vancouver probably twenty years ago  and still remember the intense post-show  family discussion about the students sacrificing their lives in a futile cause.

Bill Millerd and his production team have done an amazing job of  mounting  this show on the shallow Stanley stage. The choreography was terrific and the ensemble shone to great effect in several striking tableaux on Ted Robert's set,  in colorful costumes by Alison Green, lighting by Marsha Sibthorpe, as shown in these photos by David Cooper.

The cast was terrific.  Kieran Martin Murphy as Jean Valjean, prisoner 24601, and Rejean Cournoyer as Javert, the policeman with an obsession, were well matched in their roles. The great appeal of this particular musical for me is the range and variety of the songs from rousing marches, to funny, to poignant and sad. Although on occasion I felt  the microphones distorted the quality of the voices, the words were clearly audible and it was a pleasure to be able to appreciate the lyrics.

John Mann as Thénardier the rascally innkeeper and Nicola Lipman as the equally rascally Mme. Thénardier were hilarious in their big production numbers,  "Master of the House" and "Beggars at the Feast."  And of course the ensemble have those rousing songs "Do You Hear the People Sing" and "Red and Black", as well as the more sentimental "Drink With Me." Fantine (Sara-Jeanne Hosie) singing "I dreamed A Dream",  Marius (Jeffrey Victor) singing "Empty Chairs at Empty Tables" and Eponine's (Rebecca Talbot) "On My Own" brought tears to my eyes, incorrigible romantic that I am.  Emily Matchette who played young Cosette and Rachel Withers (young Eponine) were appealing, and Joshua Ballard as the energetic and  spunky urchin Gavroche was terrific in "Little People." The poise and confidence that the young actors display in these big productions always impresses me. Bruce Kellett's orchestra was in fine form.

This is one of these can't miss shows. Les Misérables is the longest running show in London's West End - some 24 years now and watching this production, it's easy to see why. An excellent pre-show meal at West Restaurant across the street, superb entertainment - altogether made for a great night out.
. 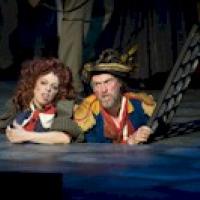 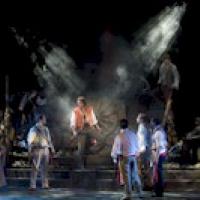 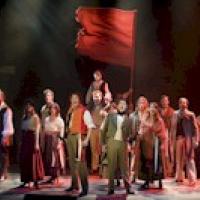