Review From The House: Age of Arousal

Review From The House: Age of Arousal

Vancouver, BC:  I came to see Age of Arousal with no preconceived notions other than that it was about feminism, relationships and set in Victorian times. Oh, and that it was the partner play in the Arts  Club Classics in Context series with The Constant Wife, which was one of my favorite plays of this season. I left the theatre feeling somewhat overwhelmed by the richness of  themes and the complexity of the interwoven stories of the six characters.  In line with my firm resolution always to  jot down, or rather input, my impressions  immediately on returning home from the theatre, I dutifully sat down before my keyboard (not a Remington! ) and gazed blankly at the screen,  my thoughts jumbled and knotted like the sheets in my  dryer.  How does one summarize the story of this intricate ensemble work?  I decided to go to sleep and hope that my subconscious would come up with some penetrating insights.

It's now 6 am and a few days later; the penetrating insights are elusive  and that of course is precisely why I made that resolution in the first place.  But I have a steaming cup of freshly brewed coffee at hand, and my mind-renewing view of False Creek before me - so here goes:

It is London in the late nineteenth century. The brave women of the suffragette movement are chaining themselves to railings and being thrown into prison in the fight to get the right for women to vote. Mary Barfoot (Susan Hogan) is still having nightmares of being force fed in prison. Mary and her protege/lover Rhoda Nunn (Laara Sadiq) have taken their fight for female independence in another direction by founding a school to train women for work as secretaries - they teach typing on  Remington typewriters. Did you know that the first Remington typewriter was produced in New York in 1873?  I had never really thought about that before  but just assumed the typewriter was a 20th century invention.

I digress but maybe that is not inappropriate in terms of the structure of Griffith's fascinating script. More about that in a bit. Back to the storyline. Barfoot and Nunn rescue the three Madden sisters, left destitute on the death of their father,  and plan to train them to work. Virgina (Kerry Davidson) has other plans to travel to Berlin where she believes can freely express the masucline aspects of her identity while Monica (Jennifer Mawhinney) trades on her beauty to find men to support her.  Alice (Gwynyth Walsh) compliantly learns how to use her Remington.  Into this mix of women comes Everard Barfoot (Martin Harper), who seduces Monica and causes the fiercely independent Rhoda to question whether love can be allowed to complicate her feminist life. All are struggling with the question of whether independence means one has to be alone.

While Mary and Rhoda seek to arouse the desire for independence in the women they teach,  they are themselves conflicted . Does adhering to your own strong feminine identity necessitate rejecting love?  Can a women be mistress of her own destiny while the "property" of her husband? These may seem like non-issues to those of us who have grown up post-Betty Friedan but it is a sobering thought to consider the plight of women today in countries like Pakistan and Afghanistan to name only two.  The battles fought by  the suffragettes in Western countries pale in comparison to the fact that women in many countries are so  oppressed that they can't even show their faces in public, let alone parts of their bodies. And in this tolerant country of ours, we allow immigrants to bring this psychological oppression to our shores.  Only yesterday as I walked back through David Lam Park, I passed a woman in a burqa pushing a pram,  covered head to toe despite the warm spring sunshine. I can't help being outraged by this. I know the argument that these women have the right to chose to cover up,  here at any rate, but really, do they have a choice? Before I take off on a rant about this  - I  have got to remember that I am no longer writing Rants, Raves and Reviews - I should get back to the play.

Griffiths uses the device of inner text spoken aloud in counterpoint to direct address between her characters to both comedic and dramatic effect.  This enhances the richness of her text but when, as sometimes happens, her characters are speaking simultaneously,  the effect is somewhat cacophonous and the words difficult to discern. And I was sitting very near the stage - which brings me to a point of issue with the venue. Those dratted front rows.

The floor of Pam Johnson's imaginative set is a giant typewriter (not obvious from the ground level seats).  The first three centre rows at the Granvuille Island Stage are on the same level, For much of the play as the characters used the upper levels of the stage, visibility was alright but  for the scenes on the lower level of the set, as when Evrard and Rhoda had their romantic interlude, much of the action was obscured by the heads of the people in the two rows in front. I think the Arts Club should ditch those second and third rows.

My coffee is now cold  and I find my thoughts about this play as confused as they were immediately on returning home. The cast is universally strong and it is a production worth seeing.  I would really like to hear back from otheres who have seen this play. I think for me while it is a reminder of how far we have come in Western Society with respect to  women's freedom and  rights,  it should also serve as a reminder that that those rights still do not exist for millions of women today. 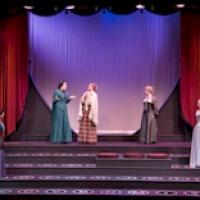 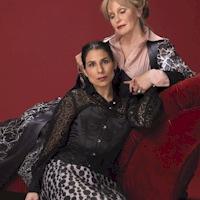