Review From The House: The 21st Floor 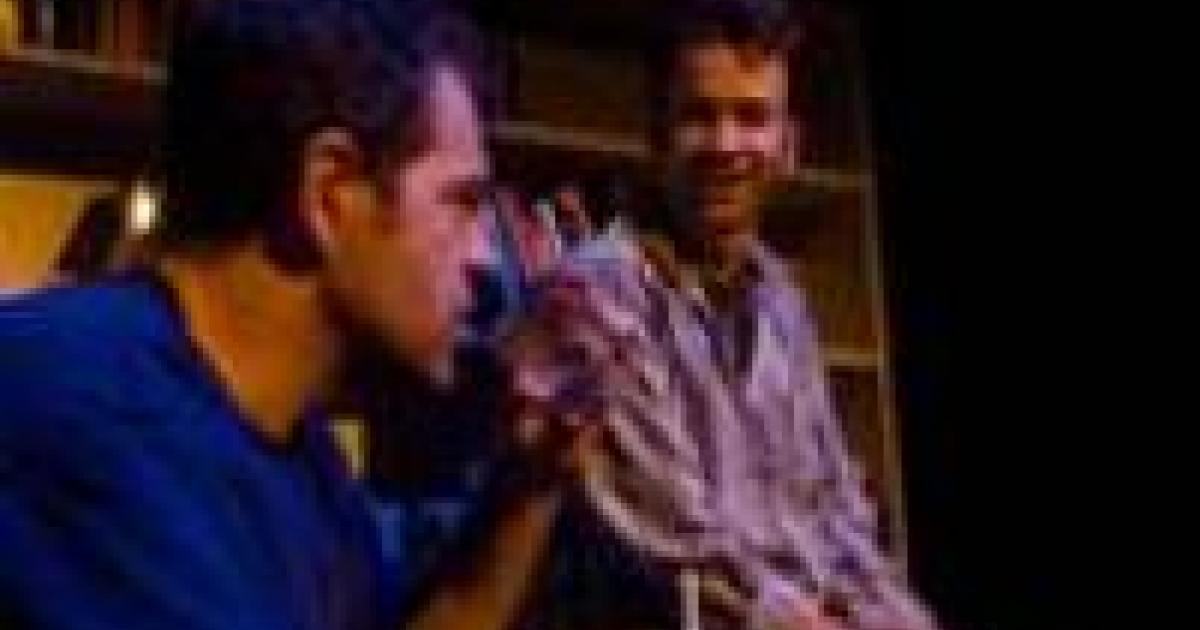 Review From The House: The 21st Floor

Vancouver, BC.
There are times when I wonder if I actually inhabit a parallel universe and it is an alternate me that is seeing  and hearing the folks around me. Either that or I watched so many episodes of Dharma and Greg that I morphed from a Greg-ette into Dharma. You know, put all that "uptightness" into a bubble and just let it float away! So now I smile a lot, don't yell at theTV news or  swear when I read the newspaper, and love my neighbours.

Before you think - "she's finally flipped out - must have been seeing too much theatre " - let me explain.

On Sunday I saw The 21st Floor, a new ensemble piece developed  by the members of Lyric Stage Project.  This was the "industry night"  talk-back and the PAL Theatre was full.  We were told that this is an evolving piece and invited to participate post-show by providing feed back on the concept and the theme.

As part of the idea of encouraging interaction, the audience was allowed to explore the set constructed with astounding attention to detail, by Grant Windsor. Doors opened by swipe cards lined the corridor of the 21st floor. They led into small furnished apartments. LIghting by Jim Wenting, video design by Andy Thompson for televisions and security cameras, and Rylan Kerbes' music and sound design really made this feel like  an authentic floor in a high rise complex.  Kudos to technical director Nicholas Timmenga, stage manager Jill Perry and their crew.

Coming and going via elevator,  were the denizens of the floor. As I saw the set, the first apartment on my right was occupied by Kenny (Graem Beddoes), relative newcomer to the floor and desperate to make friends. Next was Alex (Anna Williams), angry young addicted cell phone-misplacing "kept" woman; then Martin (Anthony Ulc), angry young failed writer/professor  (I think): then Dan (Nick Hunnings) - angry young building manager and  son of the owner;  then Rachel (Nadine Wright) angry young porn-watching lawyer. Next were Adam (Chris Bradford) - angry young partner of  David (Ryan Hesp) who becomes angry when he realizes he may actually have to support himself.  The room on the extreme left is occupied by Craig (Stephen Park) angry young blogger/podcaster.  In the supposedly unoccupied room next to him a mysterious lady in white, cat lady, peers through a telescope. I  think this is Beatrice (Eliza Norbury) but as you can see - with all those characters it became a bit confusing - for me at any rate. Elyse Levesque plays a hooker, Warren Low a drug dealer and Matt Ward flits, tumbles and capers through the dark set like a ....  well in response to a "what was that supposed to be" question, audience members came up with suggestions  like  "the spirit of the floor", "the thing that pulls us all togther", "the energy". Hmm....   Not a sympathetic character among them. Well, except for Nathalie Therriault's Sylvie, who cleaned the place in exchange for being allowed to sleep in a closet. She was  the only person who could actually connect to anyone else in a normal way.

In the spirit of entering into the discussion as was asked of the audience so that this work can be developed further, this commentary may seem unduly harsh but it is offered as constructive criticism. And I will publish rebuttals and comments  that may be posted. So feel free to have your say. Here is my take.

The underlying idea for this play has great potential.  Lonsdale Smith asked her ensemble to think about  "what it would take to get the citizens of Vancouver to truly talk to each other and to easily engage with strangers and neighbours." Through a collaborative workshop process, the characters were created, and then developed by her into the work that we saw.  It may  been a fun process but It did not work on stage for me. With the exception of the podcaster blogger, all the other characters were more cliche than archetype.  Who would actually want to get to know any of them?   The overwhelming emotions in the air were alienation and anger, anger, anger. They all needed Dharma's bubble. Kenny's resolution to his problem came out of the blue. Is that what it takes to make people talk to each other? The net result was that I found most of the characters in the play trite or not credible.  I thought  the character of Craig  was the most interesting in the sense of representing contemporary plugged in (or wired) city inhabitant and that  the Adam/David story rang true for many contemporary relationships regardless of gender. But no one made me care.

I felt that this play does not need to be "staged." It needs a director with a firm hand and a ruthless red pencil. The pacing was far too slow and the story dragged on forever. Towards the end I found myself watching the restless stirrings of other audience members rather than the action on the stage. Even my usually patient companion became twitchy and disengaged from the story.

That being said, we both agreed that the talk back was most interesting. And this brings me back  to my point about living in an alternate universe. Having been rebuked in my Rants, Raves and Reviews days for two grumpy reviews of  plays that respectively portrayed a group of  welfare moms as lying, thieving and promiscuous,  and glorified lazy, drug abusing teenagers, (see "Critics critiqued, Reviewers Reviled"), I acknowledge that my perspective is that of a "mature, retired professional, comfortably housed, adequately fed and part of a supportive family and social network."  However, as I spoke up in the talk back session, my philosophy is that personal responsibility trumps rights. I can't blame others for not greeting me as Martin does in the play, if I won't greet them first. And why would my neighbours want to get to know me if I don't want to know them?

So the alternate universe. My Vancouver is not alienating and isolating. I moved  into  a large condo complex a couple of years ago. I knew no one. A small group of people took the initiative of organizing quarterly parties,  a film club, a book club, a cycle group, a hockey group. We have an on-line newsletter, a Facebook group. The complex has developed into a small community  where neighbours help each other out.  We greet each other in elevators. Some one had to make the first move. But others have to respond.

Feel free to comment, on line or off line to gillian@reviewfromthehouse.com and check out that RR&R post.