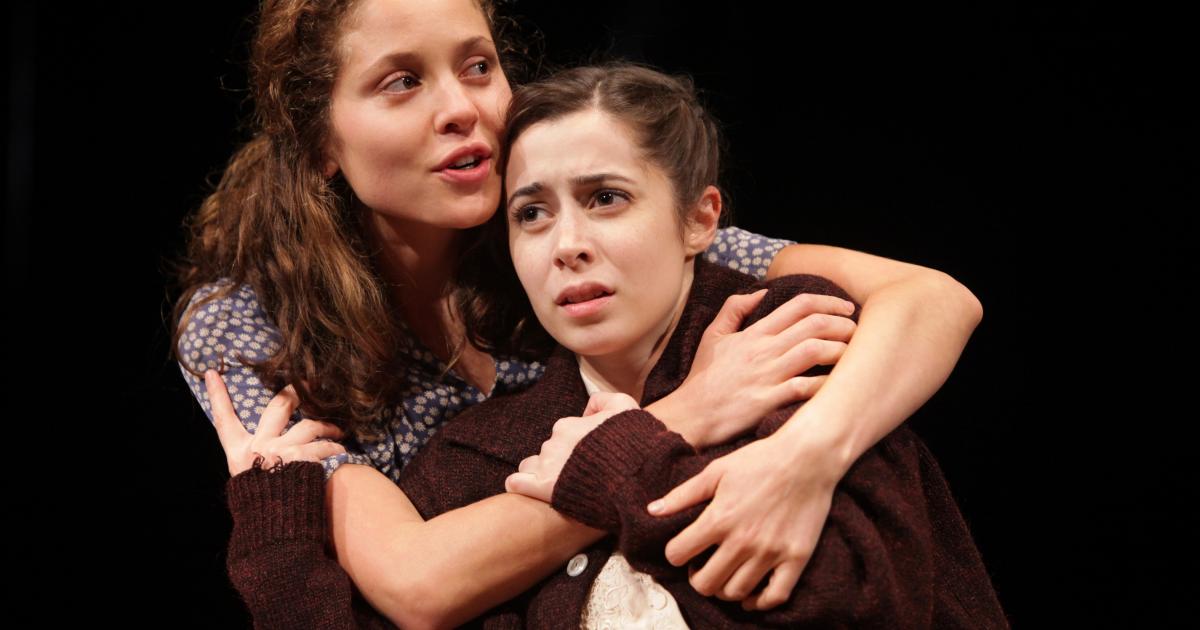 New York, NY:  The World Premiere of  The Retributionists,  a new play by Daniel Goldfarb, is presently being staged at Playwrights Horizon, which like our own much smaller Vancouver Playwrights Theatre Centre, is dedicated to supporting and developing playwrights and their works.  The production offically opens Monday, September 14 when I will be back in Vancouver,  but I managed to catch it in preview. Goldfarb, who is originally from Toronto, obtained a BFA and MFA from NYU, and now lives in New York and teaches at NYU.

In brief summary,  Anika (Margarita Levieva), Jascha (Adam Rothenberg), Dinchka (Cristin Milioti) and Dov (Adam Driver) are four young Jews who escaped death in the Nazi concentration camps by hiding out in the forests during the time of the Holocaust, and carrying out  whatever acts of resistance they could to harass the Germans.  A driving force that helped them survive, was planning revenge.  Dov, the leader of this band of partisans, together with Anika, vowed that the German people must learn that there would be consequences for their actions. Their mantra was "one dead German for every dead Jew'"  When the play begins, it is 1946, three years after their time in the forest,  and they are ready to carry  out their plans for revenge.

They have planned two scenarios to achieve their goals. Plan A, to be carried out by Dov and Dinchka,  involves a mass poisoning of the German population by cyanide. Plan B we later learn involves arsenic and is targeted at  German soldiers.

The action moves back and forth in time and place:  a hotel room in 1946 Paris where  Anika convinces Jascha that if he carries out  Plan B, she will marry him;   a train heading into Germany where Dinchka and Dov confront each other over action and consequences;  the forest in 1943 where it all begins,
and a bakery in Nuremberg. where ...  well; you have to wait and see.

Scenic designer Derek McLane helped by lighting by Peter Kaczorowski, achieves wonders with a single door on a darkened stage.   By flying down an additional set piece, or dropping a panel, the door becomes the entry to a hotel room,  a train compartment, the rear door of the bakery.

Playwright Goldfarb confronts some weighty  if well-worn issues in this play.

Should one  be forced to realize the conseqences of  one's actions?

If you follow the "eye for an eye" philosophy does this make you as evil as the original perpetrators?

Did the Nazi hunters actually glorify the master perpetrators by the mere fact of publically hunting them down?
and conversely, by anonymous mass murder of the ordinary German folk, would you  dehumanize them like the Nazis dehumanized the Jews?
And does the racist attitudes and behaviours of the people that allowed Hitler to do what he did, mean that they are as guity as the men at the top?

Although I was interested in the issues that this play raised, for me it did not entirely succeed as dramatic entertainment. I think that this is largely because of the  ambiguity of the character of Anika, who really is the key to the play.  Although her role in the events was predictable, her reasons were not obvious. In her performance pf this role Levieva valiantly sequed from pretty seductress, to manipulative fanatic, but there is an inconsistency about the character that made her difficult to comprehend - and therefore to emphathize with. In contrast, the character of Dinchka came across as real,   both thoughtful  and honest, and Milioti was able to  bring out these attributes beautifully. Rothenberg was effective as  the love-struck Jascha, and in Jascha's pretence at being the Polish would-be-baker, while Driver was also convincing as the egotistical, manipulative yet manipulated Dov.

In cameo roles, Hamilton Clancy played a wonderfully nasty racist Gustav, the baker, and despite their similarly anti-semitic attitudes,  Strus (Ute)  and Henderson (Christine), the baker;s assistants,  were able to arouse my sympathy for their own bad situations.

I made a decision to spend my limited time in New York predominantly seeing as many new plays as I could.  I was attracted to this play because of the subject matterl, but because of timing pf my visit could only see it in preview. Overall I enjoyed it but it would be interesting to see if this play is reworked if the character of Anika could be better developed so that her motivation and behaviour  would be more understandable.

I would love to hear how others felt about this. Comments are wecome, whether in agreement or not . 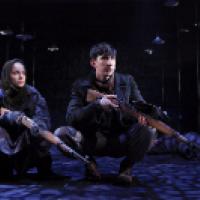 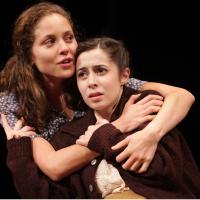 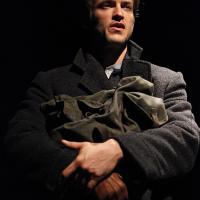