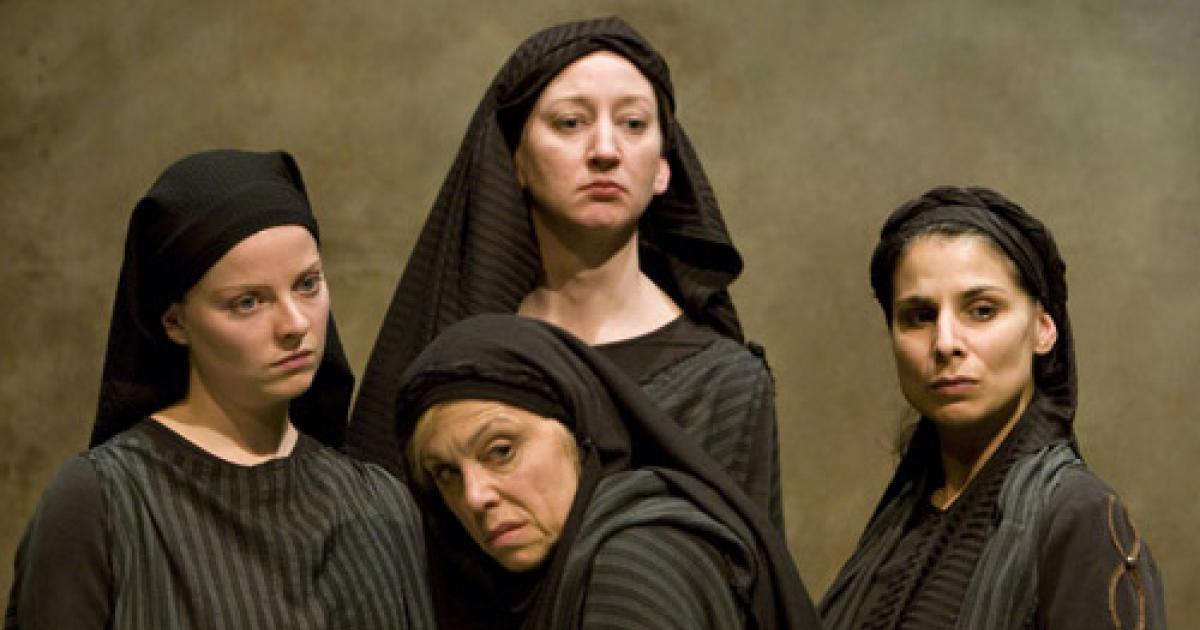 Vancouver, BC: I think our enduring fascination with Greek tragedies written around 2500 years ago lies in their fundamental questioning of human behaviour and morality through themes that still resonate with contemporary audiences.  The issues of justice, revenge and free will, of power, honour, guilt and innocence that permeate these plays cry out to us to examine our personal ethics and the moral choices we make in our own lives. Blackbird Theatre's production of Euripide's Hecuba, elegantly and sparely directed by John Wright, spotlights many of these ethical issues with pin point precision.

Hecuba, once Queen of Troy, wife to Priam and mother of Hector, both killed by the Greeks, is now part of the spoils of war, a slave to Agamemnon.  On their way back to Greece, the Greek force is becalmed at Thrace, waiting for the winds to rise to take them home. To honour their dead hero, Achilles, they have voted to sacrifice Hecuba's daughter, Polyxena. Hecuba's pleas to spare her fall on deaf ears. Polyxena chooses to die with honour rather than to live as a slave. When Hecuba finds out that her youngest son, Polydorus, supposedly safe with the Thracian king, Polymestor, has been murdered for gold by Polymestor and his body cast into the sea, Hecuba determines to have her revenge. And who can blame her for what she does to Polymestor?

But what of his children, innocent of any crime against her or indeed anyone? What of the other innocent victims of war? How do you punish the aggressors yet avoid "collateral damage." And is it really better to die "with honor" than to go down fighting? Has much changed in 2500 years? Well I guess we dont poke peoples eyes out any more.

Linda Quibell brought a sad dignity to the role of Hecuba, and Anna Cummer played Polydorus, her son, and Polyxena, her daughter, with equal charm. Wright chose to use an-all women cast with Carmen Grant playing Odysseus and Agamemnon, Lesley Ewen playing Polymestor and Mia Ingimundson as Talthybius, herald of the Greek Army. Masks designed by set and costume designer, Marti Wright and crafted by Laura Farn, transformed the actors most effectively into each character.

The dramatic impact was really driven home by the stark set, the somber black costumes of the chorus led by Laara Sadiq and the Greek song-chants but Nicola Lipman as the old serving girl brought a touch of humour to lighten the mood.  This is a totally enthralling play that kept me focused throughout the 105 minutes straight. On my unsophisticated but very expressive rating scale: the wow factor- I give this production ten out of ten. Definitely don`t miss it.