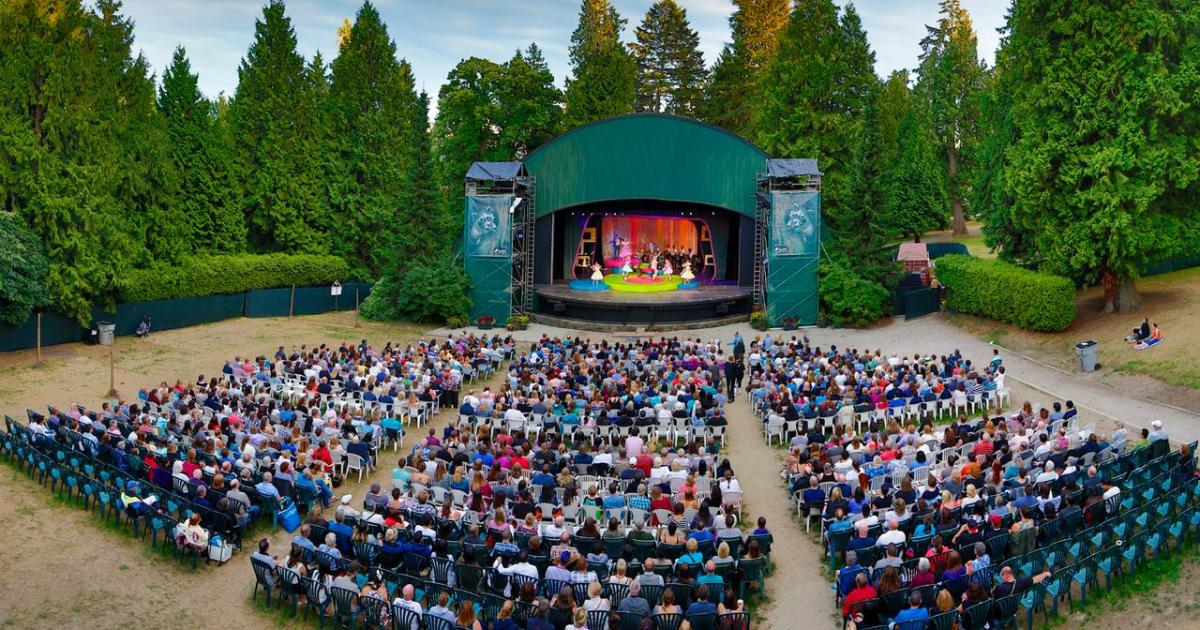 Vancouver, BC. Well this BC summer day drifted into early evening with a gust of wind cooling the air. I was back at Malkin Bowl to see "Grease," hoping that I could keep my toes from a-tapping, my knees from a-knockin and not get up to dance by the light of the moon. Oh wait, that's from another song.

Sadly this outing was not as idyllic as the previous one although this was not the fault of the cast. Unfortunately on this holiday evening, with what seemed to be a sold-out crowd, some mysterious computer glitch messed up the reservation system and the show had to be delayed half an hour to get everyone seated. Then just as the second number, Summer Nights, was over, an audience medical emergency caused the show to be stopped. To the credit of the cast, they picked up smoothly from where they left off but the continuity was obviously disrupted.

In accordance with the superstition that problems occur in threes, a group of badly behaved youngsters, seated on the grass nearby talked loudly and audibly through the latter part of the first act and the entire second act. Even a loud shush from another obviously frustrated audience member failed to quiet them. Where were their parents, I wonder?

To their credit the TUTS volunteers and staff coped admirably in the face of the seating crisis and the audience in general was remarkably patient. Anyway, problems in the house should not detract from appreciation of the energetic efforts of the cast and indeed it was fun, being back in the fifties, so to speak. I was a young teenager then, more the Sandy type than like Rizzo or Frenchy. Why are you not surprised? But rock and roll parties were big and on most weekends we danced till we dropped from exhaustion. As an aside it's Interesting, to me at any rate, that in retirement I've returned to dancing. Jive today is little different now to what it was then, and just as much fun.

So back to Grease, which I believe is the only musical written by Jacobs and Casey. The musical was amazingly successful both as a stage version and the cool, or perhaps I should say hot, film version with Travolta and Newton-John. The TUTS cast does a great job, singing and dancing their way through songs like Born to Hand Jive or Rock â€˜N Roll is Here to Stay. Loved their rendition of Greased lightnin' â€“ the dancing was amazing. I wanted to see it all over again. Unfortunately distortion from the sound system is really noticeable on the slower songs.