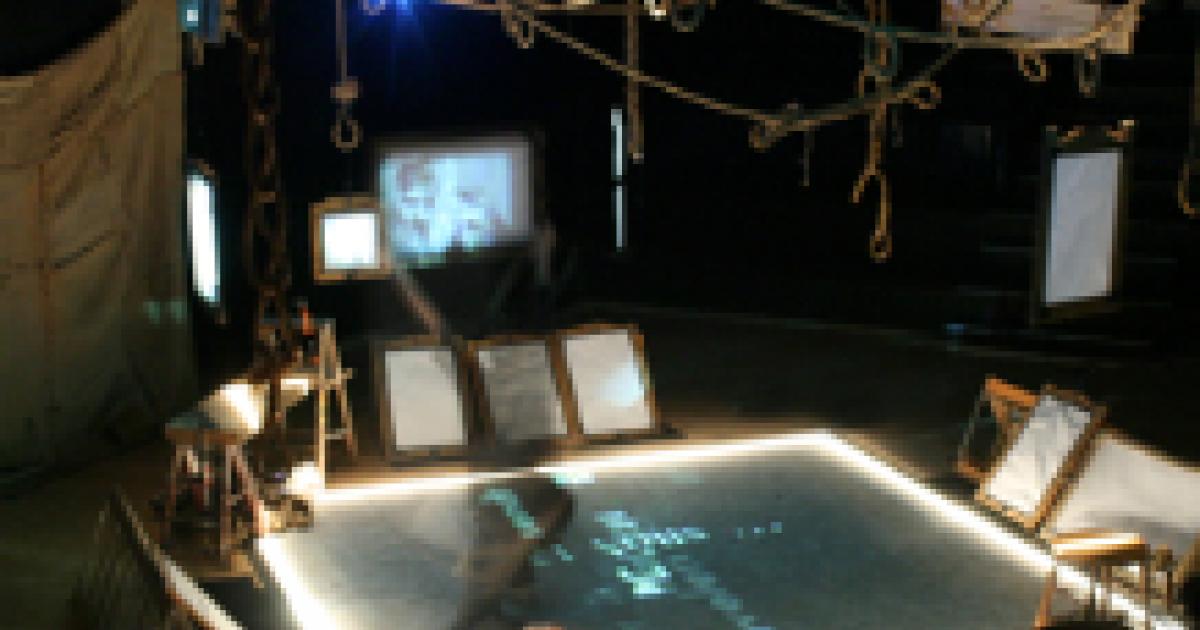 Vancouver, BC:  When I initially read the description of The Passion Project as "video art installation- meets theatre" I wasn't sure what to think about it other than that it would be novel and different. After seeing it, I concluded that think is the wrong word. It is more a sensory experience than a cognitive experience.  And what on earth do I mean by that?  Let me try and articulate my experience.

Arriving somewhat early, as usual, I await the start of the show in the lobby of the theatre. A suggestion of what is to come is shown by three sets of grainy black and white images projected onto a sackcloth screen. As more people arrive we are taken round to the back entrance of the theatre and told that we should wander around during the performance for an interactive experience.

The theatre space has been reconfigured and some rows of seats removed. There is a 10 x 10 square delineated by rows of panel with loops of ropes hanging overhead. Around the square there is room for the audience to walk. The lit set is quite striking. The ropes and sack-cloth screens evoke a sense of medieval times; the demarcated space, a sense of confinement.

The house lights dim and a woman moves silently into the white lit square. Laura K. Nicoll is Joan, cross examined, preached at, tortured and consumed by fire. Over the next 30 minutes she moves rapidly and silently around the square, interacting with  images projected onto the panels, arranging and re-arranging them on the ropes, until finally in a dramatic ending, panels and ropes are brought together into a pyre-like structure.  The soundscape varies too, sometimes quiet, sometimes thunderin , sometimes filling the space with an extraordinary intensity.

The directorial debut of Reid Farrington, New York based video artist, The Passion Project is drawn from  Carl Theodor Dreyer's The Passion of Joan of Arc with Maria Falconetti as Joan. Made in France in 1928, this "last great silent film" depicts the final hours of the Maid of Orleans as a prisoner of the English - her trial by ecclesiastical court, torture and execution by being burnt at the stake. In his director's notes Farrington describes the odd fate of Dreyer's film. The shortly after its completion in 1928 the master negative was destroyed by fire, forcing Dreyer to release a second film cut from his out-takes. This second negative burned up in 1935. various prints were produced, including the three different prints used in creating The Passion Project.

So - cognitive versus sensory. movements. At the beginning I stood at the side, wandered around and admired the precision of Nicoll's movements. After a while I tired of standing and sat on the edge of the platform to watch and listen. I found the movements repetitive and disjointed and I did not get caught up in the story. So there was no emotional or intellectual involvement but at times the music swept me up and in the dark confines of the theatre I could close my eyes and feel the sound.

But overall I must admit, the "passion" was lost on me.