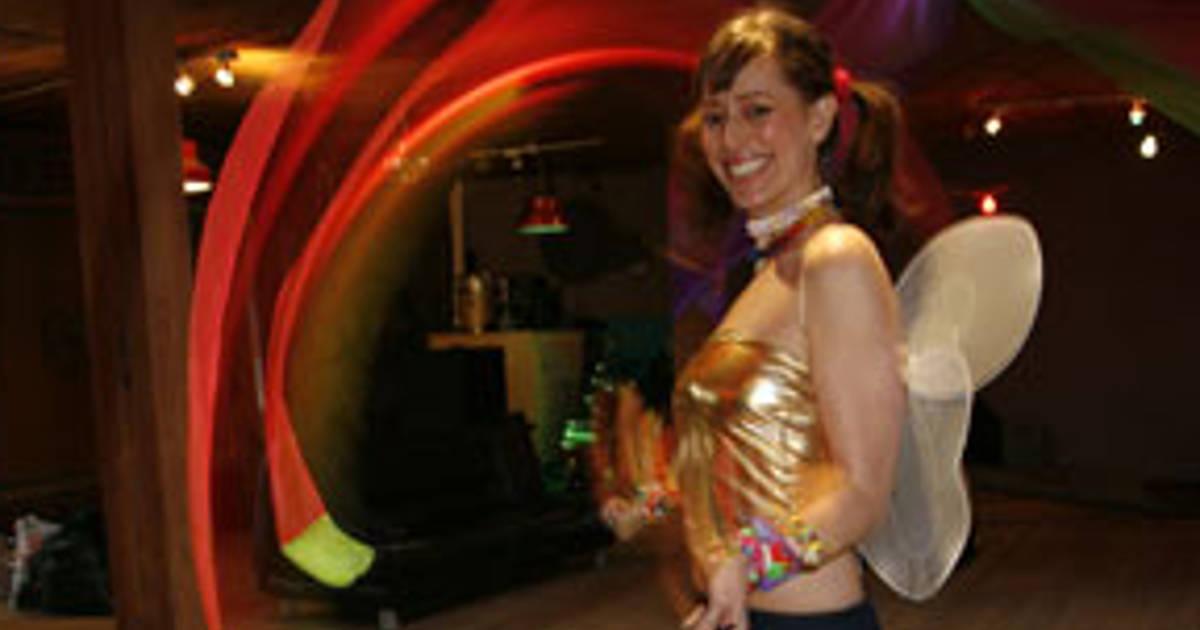 Vancouver, BC. One of the only pleasant aspects of air travel is the fact that for a few precious hours you are stuck in your seat with nowhere to move to, no household chores to take care of and no phone calls to interrupt your train of thought. A perfect time to meditate about heartbeats, music, growing up and growing older - or Upintheair Theatre's site-specific production about the West Coast Rave scene.

Dance has always been my preferred fitness activity even though I dutifully do my daily 45 minute workout on "the machines." 120 beats per minute, apparently the optimal tempo for rave music is exactly double my target resting heart rate. A fearful symmetry at work here. My feet had to be firmly tucked under the chair or I might have embarrassed myself by becoming part of the action. Dance dissipates inhibitions, stimulates endorphins, relieves stress and contrary to expectation, should actually have a calming effect. Unless the physiological benefits are counteracted by other chemical effects "“ alcohol and drugs.

And that gets us back to raves, the once prevalent gatherings where young people indulged in music, drugs and alcohol till the wee small hours of the morning or later. In 120bpm, writer Adain Maxted, writer-directors, Daniel Martin and David Mott, and dramaturge, Farrah Rooney, have drawn on stories and events that happened to themselves or their friends to give us an hour and a half taste of what it was like to be a "raver". The "plot" loosely revolves about Foster (Kyle Jespersen", a first timer at the rave scene, who is befriended by Hero (David Patrick Fleming), Pixie (Sara Bynoe), Ange (Caitlin Fulton) and Candyman/Bob (Christopher Frary). The Professor (Frano Marsic) gives a run-down on music, dancing and drugs, the raisons d'etre for raves. Then the Seattle Death Ravers (Daniel Errey, Miranda Huba and Jamie James) arrive and things get more intense. With minds blown by drugs, naturally tragedy strikes -death from overdose-followed by a pathetic "wake". One wonders if the young people portrayed here were ever capable of either rational thoughts or honest emotions.

I liked the concept of this production. As you have probably realized I have never been to a rave. The dances of my youth were just that dances, where we rocked wildly to music, fell madly in and out of love but were more inhibited about sex (the Pill was new and not easily obtained). People used to sneak out to have a cigarette! So meeting on a street corner, being taken to a "secret location" in an unused warehouse, lining up on rickety stairs to get in ok, and then the beat. Promising start. But the characters were one dimensional and not too interesting, the beat got monotonous and the end was predictable.

Not at all like the Upintheair Theatre team, Martin and Mott, whose work I have been following with interest since my daughter, Amanda, directed "Wilson's Leg" for them a few years ago. Their Walking Fish Festival is usually fun, and the lineup quite unpredictable. Last year's gave rise (!) to an ongoing cucumber joke. Hmmmmm. I wonder what this year will bring?