New York, NY:  As I took my  premium seat, center  in the 4th row orchestra ( the only way I could get a last minute decent seat to this play), the contrast between the childlike cartoon figures of  a boy standing betweeen his mom and dad, depicted on the scrim, and the play title, God of Carnage, promised an interesting show.

At curtain rise the symbolism was overt.  The stage set  (designer Mark Thompson), an elegant living room with art books piled high on a coffee table,  is surrounded by walls painted blood-red .  The facade of the upstage wall demarcating the  living room,  is cave-like in its appearance; a  creamy-coloured sofa and  vases of pure white tulips contrast with  the blood-red of the carpeting.

Two couples, hosts Veronica (Marica Gay Harden) and Michael (James Gandolfini) and guests Alan (Jeff Daniels) and Annette (Hope Davis) are ostensibly politely getting to know each other over afternoon and pastries.   Michael is a wholesaler of household fixtures and a "good son" to his aging mother who phones him constantly. Veronica is a collector of art books, and a writer, obsessed with the horrible state of the world, particularly Africa.. She is writing a book on Darfur. Their son, Henry, was recently attacked and beaten up.

Alan is a fast talking, suave high powered lawyer, who is inseparable from his cell phone. He represents a major pharmaceutical firm whose multimillion dollar drug is about to blow up with the discovery that it causes major neurological side effects such as ataxia. And the annual shareholders' meeting is about to take place!

Annette,  his elegantly dressed, beautiful blonde second wife, and mother of Benjamin,  describes herself as a Wealth Manager, although whose wealth she manages is not obvious. But never mind- it sounds very sophisticated.

As we watch them make polite small talk -  discussing a recipe for a pear and apple clafouti that Alan devours like a starving cave-man  -  we know that the politeness is but a thin veneer. And when we realize that the reason for the meeting is that  Benjamin is the  "bludgeoner" who knocked out two of Henry's teeth in a playground brawl, we know that we are about to see what lies behind each character's mask of polite civility.

All four actors deliver absolutely superb performances. Aided by liberal amounts of rum, alliances form and reform, as the real state of their marriages, their feelings for each other and their "causes" are revealed.  Although it is a little bit like watching a train wreck in slow motion, the play is bitingly funny.

It is amusing watching Annette being far more distressed about the fate of  a "liberated" hamster than about Henry's damaged  teeth, Veronica the pacifist beating up her  husband, and .Michael dealing with his aging mother whohas just been prescribed the drug that causes ataxia.  But  Alan has several of the best one-liners. With my medical background, I  loved his dismissal of the ataxic side effects as "two or three people bumping into furntiture."

This single act  four-hander has been running for some time on  Broadway. It is deserving of the plaudits it has received and  I thoroughly enjoyed the play.  My only quibble, which obviously is not the fault of the writer or the actors,  is that no matter which expensive seats I get,  somehow I always seem to be seated  behind the tallest or largest person in the row in front  and have my sightline blocked for significant parts of the stage.

Maybe they should sell seats by height -tall and large people only allowed in the back rows. Yes I know I am grumpy but that is two shows so far out of  3 that my view was obstructed, despite paying premium prices for the tickets. Humph!

Well, three more shows to go - hopefully my sightlines will be better in the other theatres. The View from the House should  be a good one. 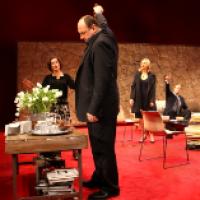 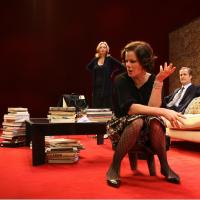