New York, NY:  I had only the vaguest knowledge about the life of Emily Dickinson, who posthumously came to be  considered one of America's major  poets.  I knew that in her latter years she had become reclusive and eventually did not leave her house but I knew little else of her history. So I  eagerly anticipated my visit to Theatre Row to see this new play by emerging playwright, Chris Cragin.

Theatre Row is a great asset for smaller theatre companies.  It houses 5 theatres ranging in seating capacity from 55 to 199 seats. I saw Ascension, an excellent production, in The Lion on my last visit,  and Emily is running in The Kirk. It is a long narrow  theatre that seats about 90 people and it was almost full. Nice  for a Sunday matinee of a new play.

For a theatre of this size the stage is quite large and the director, Steve Day, and set/lighting designer Rachelle Beckermann used the space effectively with  the aid of minimal set pieces and props. A row of pegs lined the upstage wall, with items of clothing hanging from all but two of them.  A door panel leaned against the wall in the corner.

Downstage the playing space was was  bare but for a metal base which would support the door. Below the pegs on the floor stood a row of wooden boxes which, covered by the door panel, became a desk, a dining room room table or a row of chairs.

Cragin structured her play in  the form of 8 scenes, four in  each act  - loosely based on events that took place over  twelve years of Emily's life from 18 to 30 years. Each scene covered a significant event in Emily's life. For some reason that I  don't understand, Cragin chose to format the scenes in reverse chronological order.

The play starts with Emily learning that  Mr Williamson has submitted a poem of hers for publication without her knowledge and that it had been accepted. It ends at the time when she decides not to return to Mount Holyoke school, and rejects a marriage proposal from Newton, whose premature death later traumatizes her.

Davis conveyed beautifully an image of  Emily as a reserved yet self possessed young woman but the other characters were less effectively portrayed as these young actors doubled up on  roles. For example Ledel was much more effective as Sue, Emily's spirited young sister-in-law than as Mrs. Dickinson - a much older woman. Venters played  Vinnie, Emily's younger sister and young Sophia (Emily's cousin who died young) while  Bonewitz doubled as Newton and Mr. Williamson, both admirers of Emily's work.   Houseman who played both  Emily's brother, Austin and  her cranky father,Mr. Dickinson who dismissed Emily's writing while pushing Austin's work , was better able to differentiate the two roles as they had more distinct characteristics.

For me this work was more like a beautiful portrait - as the playwright notes - "An Amethyst Remembrance " than a narrative.  With liberal use of lines from Dickinson's poetry, spoken singly or in unison by the ensemble, it played out like a long delicate poem.

I think the choice of reverse chronology prevented any dramatic tension from building. We really dont see any dramatic arc for Emily - the change from young reserved woman to recluse can't be effectively shown, and without that there is no journey.

Emily runs till September 27th at Theatre Row. I would be interested to hear how others see this new work, particularly the use of reverse chronology - so feel free to disagree with me by using the comment box below this posting.

As an aside I was interested in the Vancouver connection for this play. I noted in the progam that last year Firebone Theatre did a play by Ron Reed, Artistic Director of  Vancouver's Pacific Theatre where I saw  Emil Sher's  play  Mourning Dove.  Mourning Dove was one of the most moving plays I saw last year and I admired Reed's "perfectly pitched portrayal of a simple man, aware that he is "different".  I understand that Emily was  workshopped at Pacific Theatre earlier this year. 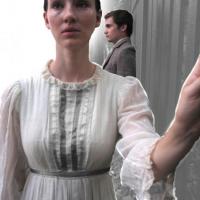