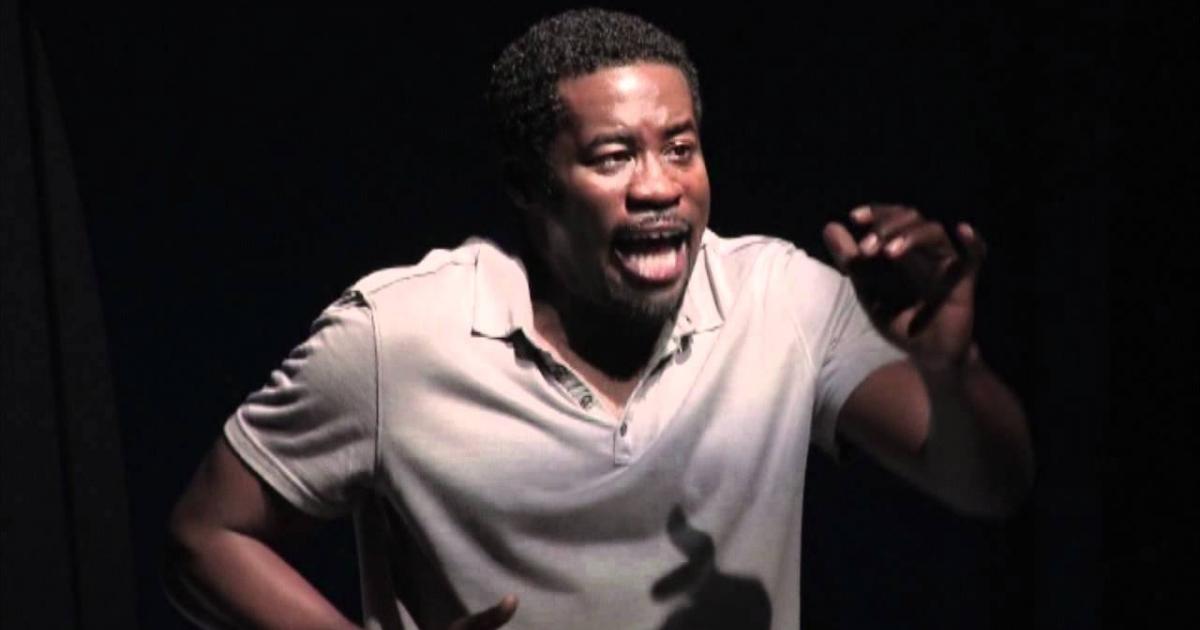 New York, NY: It seems that in New York, as in Vancouver, standing ovations have become so common place that they have lost their significance. I have frequently observed, in perplexed amusement, audience members leaping to their feet after quite unexceptional shows.

However after a tour-de-force performance by Daniel Beaty in EMERGENCE-SEE I was on my feet with the rest of the audience. The first indication of the quality of this production was Beowulf Borrit's set, and Drew Levy and Tony Smolenski IV's soundscape which was running as one entered the theater. The playing space was in a high ceilinged cavernous hall that seemed like a railway station but actually was once the Astor Library.

The central concept of the play is that a ghost slave ship, the Remembrance, suddenly rises up from the Hudson River in front of the Statue of Liberty. Through the voices of multiple varied personae Beaty chronicles the reactions of the public and the media to this event, providing insights into the immense diversity of ideologies and lifestyles among contemporary African Americans. The set of platforms at different heights served variously as the deck of the ship, Liberty Island, the cafe stage of a Slam Poetry event and other locations, with tall spars and splintered wooden structures indicating the ghost ship. The surround-sound effect of water and creaking of ancient timbers placed the audience on the ship with the bones of the long-dead slaves.

Beaty is an amazing actor/singer/writer who was the 2004 Grand Slam Champion at the "world famous Nuyorican Poet's Cafe" (which as I just discovered is just a short distance from where I am now staying). In EMERGENCE-SEE he plays so many characters that I lost count. Rodney is one of four poet finalists about to head off to compete in a Slam Poetry contest, when he hears that his father, Reginald, has somehow made his way on board the Remembrance. Reginald is a retired professor who wanted his boys, Rodney and his gay brother, Freddie, to be different to the drug dealing, gang members growing up in their neighborhood but who loses his mind when his wife is shot to death. Rodney's search for Freddie en route to get their father of the ship and his appearance at the Slam, is the thread running through the story line. But we meet many other memorable characters. Clarissa with her story of Kinky Hair and the Three Bears was especially poignant.

I was spellbound for the 90 minutes of this show. Beaty's transitions from little girl to educated professional, transvestite, homeless man, Trinidadian immigrant, television personality, African Chief and of course Rodney, Freddie and Reginald among others were faultless. Thank you, Kenny Leon (Director) and Daniel Beaty, for a superb evening of theatre.