Dancing in the Trees of Stanley Park 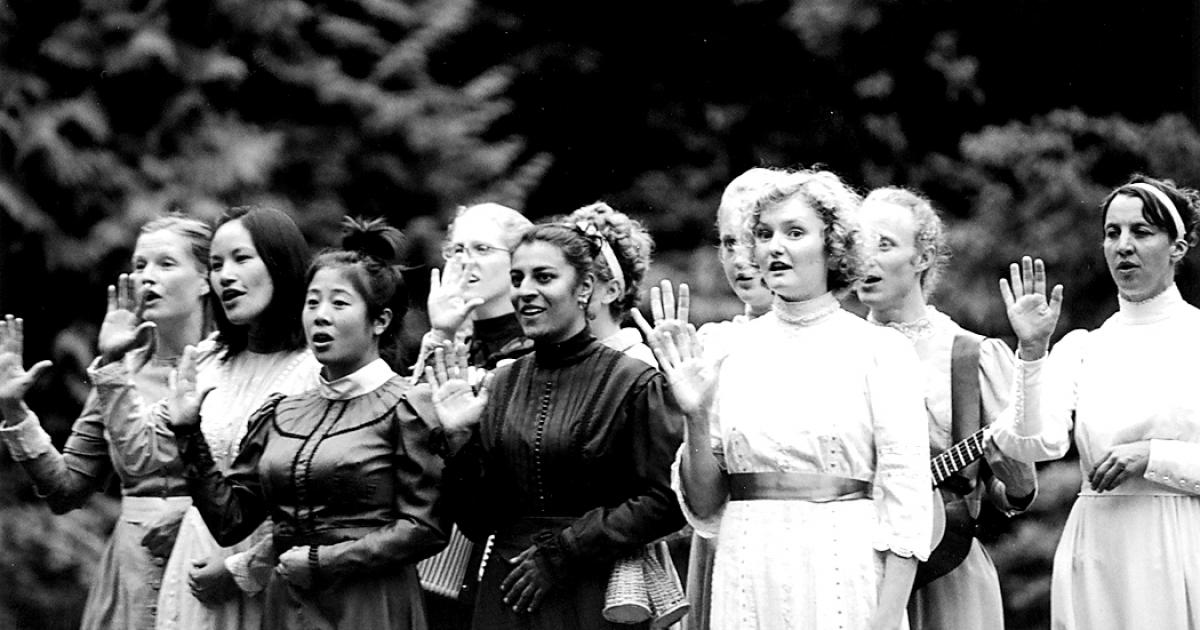 Dancing in the Trees of Stanley Park

VANCOUVER, BC - The fine Vancouver drizzle that began as we followed the "shepherds" along the trail to the grassy meadow in Stanley Park could not dampen the enthusiasm of the preview night crowd. And from the opening moments of Boca del Lupo's The Shoes That Were Danced to Pieces this show enchanted adults and children alike.

A plethora of princesses (one plus nine equals ten) in long Victorian-style gowns enter quietly and in perfect synchronicity tap their croquet game into the meadow floor, a delightfully quirky moment. Enter our narrator, The Cobbler (Andy Thompson), soaring in from among the trees, fearing the wrath of The King (Ari Solomon). Solomon's deadpan delivery provides a low key counterpoint to the frenetic concern of the cobbler who each day must produce ten new pairs of shoes, that mysteriously fall to pieces over night.

The story follows the adventures of a poor suitor who has come to solve the riddle of the shoes. As several previous men found to their horror and the loss of their heads (Harsh!) this was no easy task. And the princesses were no help -as they state repeatedly "if they did not have to sing this song, you would see their lips were sealed". So how to solve the riddle? Of the several performance sites, our favorite is the princesses' bedroom in the trees, a giant hammock, from which each princess fearlessly rappels down in her own unique fashion. However the "boats" harnessed to each actress and the doorway in the path are fantastic design elements. Another standout is the dance sequence, with the exquisite greens and browns of the costumes drawing from the forest colours.

Last year watching Vasily the Luckless, we each could not entirely suppress our critical theatrical eyes and became preoccupied with the "how" of the technicalities of the stunts rather than viewing the show with the childlike naivety of the youngest members of the audience. This year, however, we were determined to watch the play with the wonderment and magic it is meant to invoke. We let ourselves engage with the play like one of the many children in the audience and this is really the key. Audience participation is actively encouraged and it was delightful to hear the youngsters protectively shout "don't drink the wine".

Since the play is a "roving spectacular" there is much walking from one site of performance to the next. And although Boca is very good about keeping action happening along the path, if one is in the back of the moving crowd (and is of diminutive stature) it can be hard to see these linking actions. So as one friend said to me, "it sometimes felt a little slow" and the end came too abruptly. This is a free show (although places must be reserved. Appropriately, instead of passing a hat for donations, they used giant shoes. The story is simple -the effects are not.

The Grimm's fable from which this version of the story is adapted can easily be found on the web at sites like The Gutenberg Project. The writing (James Fagan Tait), the music (Joelysa Pankanea) and design (Jay Dodge) come together in an enchanting experience which should not be missed come rain or shine or sold-out shows. Get down to Prospect Point and put your name on the wait-list. You won't be disappointed and for a short span of time you will get to experience theatre through the eyes of a child.