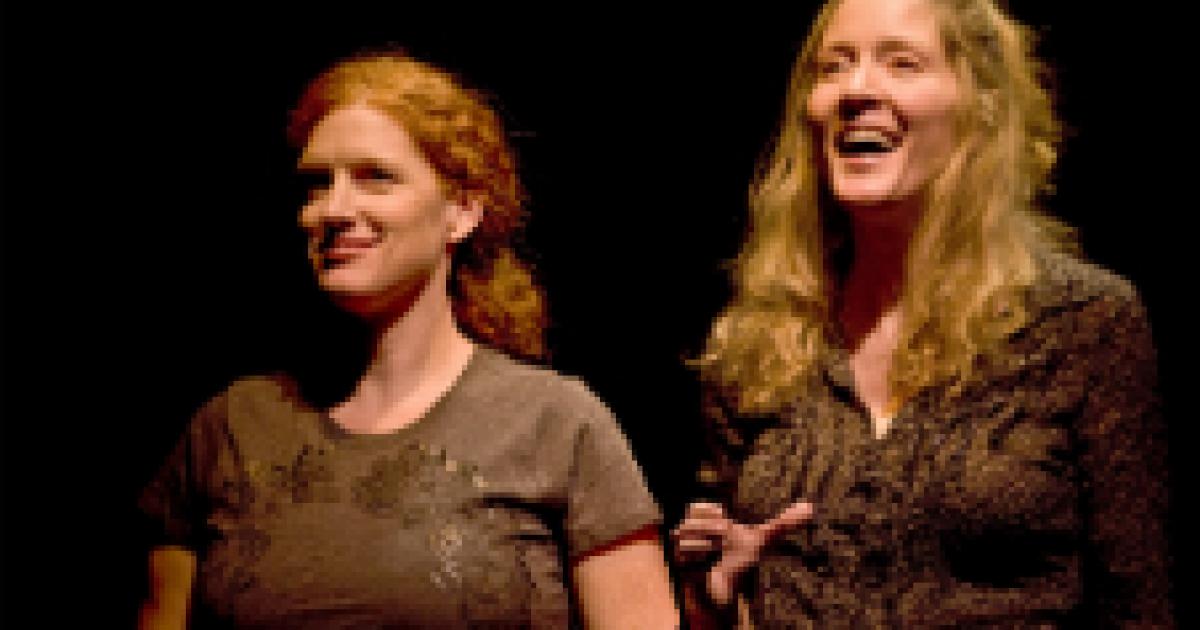 A Beautiful View
Written and directed by Daniel MacIvor
Ruby Slippers Theatre
Performance Works
Dec 4 to Dec 13, 2009
Also at the Shadbolt Centre for the Arts
Dec 16 to 19.

Vancouver, BC:  Start with a script written by one of Canada's iconic playwright/actors and directed by the playwright himself. Feature two compelling powerful female actors with hugely synergistic on-stage chemistry in a small theatre setting where every nuance of  their performance can be seen. And focus on the ebb and flow of an intimate relationship between these two women, from casual meeting, to sexual encounter, touching on friendship, love, attraction, trust and mistrust. My expectations were high - I was expecting truly to be blown away by this play. But I confess I just did not get it.

Colleen Wheeler is "Linda" and Diane Brown is "Mitch". The telling of their story is framed by a camping trip where they have come together to talk about what happened at a Halloween party that disrupted their relationship that had developed over some twenty years.

For the first maybe five minutes there is silence. Wheeler connects with the audience with minute facial gestures, sideways looks, a twitch of the mouth. This opening night audience is theatre savvy - we know we are supposed to feel uncomfortable and restless so nobody moves a muscle. As the minutes pass, an occasional laugh or a nervous giggle is heard from different seats.

Outdoor sounds of wild life issue forth. And we are at a campsite. A tent, two chairs. Two women. The tension between them is electric. We know something has gone very wrong. Over the next hour we follow them through years of a relationship. They meet in a casual encounter in a store, each shopping for a tent. They share their fear of bears, and tentatively introduce themselves - and here the first lies are told. We watch as their relationship develops, teetering precariously between physical attraction and mistrust from half-truths and more outright lies. Until at last we end up at the end frame - the campsite.

I was certainly caught up in the drama. Wheeler and Brown both have such intense stage presence that you can't help but keep your eyes glued to the stage. But as the final dramatic events unfolded my mind wandered wildly from the supposedly dramatic denoument. Admittedly a current production of The Winter's Tale is still fresh in my mind but I couldn't help thinking of  "exit pursued by a bear" and fighting to hold back a giggle. Not the intended response to the outcome of this play, I am sure.

I really can't figure out why I did not like this play. Wheeler and Brown were great. I have enjoyed everything I have previously seen of MacIvor's work as a writer and an actor from the first time I saw This is A Play,  to Monster, Cul de Sac and others. The last play of his I saw, His Geatness got a rave from my Rants and Rave column. Maybe, I thought, I was just missing some deep metaphysical concept that everyone else seemed to get.

The recurring catch phrase in the play is "nothing is enough". That sort of sounds like something profound to think about - a meditation on what is nothing. But I really did not get anything deep out of that thought. In contrast, I thought about Lorna Crozier's "a Poem About Nothing" that I read ages ago and loved. That reached me somehow. But my reaction to the repetition of the phrase in this play resembled the easy humourous tags that headline writers would use like "nothing is not enough".

Then I thought maybe I would just write nothing. After all why post a negative review about work from a writer and performers who you really admire. But that would be a cop out. So here it is. Maybe someone will comment on how I totally missed the mark with my view of this play. But "eaten by a bear, really?"