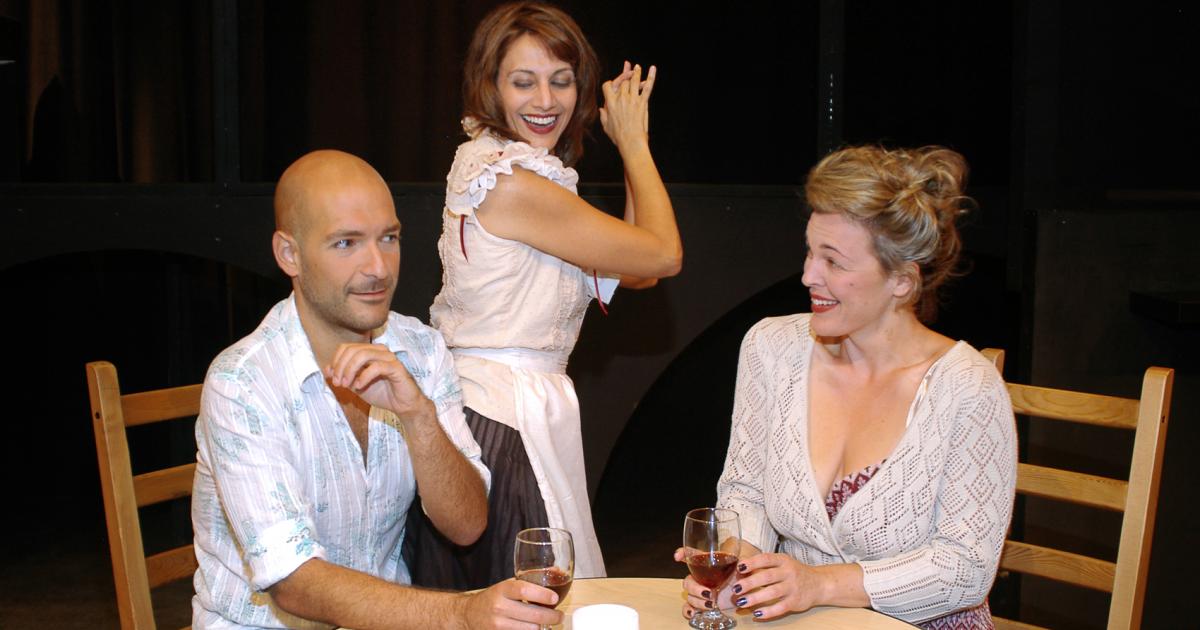 Vancouver, BC:  Almost exactly a year ago  I watched a staged reading of an early version of Via Beatrice at the Playwrights Theatre Centre. At the time I commented on my Works in Progress page commentary that  " It is always a privilege to get a peek into the creation of a new work, and then, hopefully, to see a full production of the finished version." And it really was exciting to see the polished production that this work has become in a year.

Often workshopped plays  will have a totally different cast in final production but  the original cast  at the staged reading,  Laura Di Cicco (Beatrice /Nicole), Lucia Frangione (Diana/Lucrezia) and Marco Soriano (Alessandro/Francesco/Amato),  and musicians, Peggy Lee and Rob Samworth form the ensemble that has lived with this work for the year, and it shows in the smoothness and ease of their interactions. Di Cicco was utterly charming as the waitress/Beatrice character and Frangione played Diane's  emotional fragility very well.  Soriano, was equally charming as mercurial tour guide Alessandro who has problems of his own.

The fascinating story of 16th century Beatrice Cenci has been told in several poems, novels, plays and opera over the last two hundred years. Beatrice  was the young daughter of  Roman aristocrat, Francesco Cenci. She lived with her father, brother Giacomo,  her stepmother Lucrezia and half-brother, Bernardo in a Palazzo in Rome. Sexually abused by her father, she, together with Lucrezia and Giacomo were accused of arranging the murder of her father by Amato.   All three were sentenced to death and Bernardo was imprisoned. Pope Clement V refused to show them any mercy and confiscated the Cenci properties for himself. Sounds like a conflict of interest to me but I guess one does not question Popes. Anyway Beatrice was beheaded at the age of 22 on a scaffold built on the Sant'Angelo Bridge. Legend has it that her ghost, carrying her severed head, returns to haunt the bridge  before each anniversary of her death.

Playwright / libretticist Jenn Griffin weaves the legend of Beatrice into the story of Diana, a recently bereaved mother who has come to Rome to fulfill a promise made  to her daughter, Nicole, who had killed herself after being raped. At a cafe near the Sant' Angelo Bridge, Diane encounters Alessandro, who has just started his job as a tour guide, who helps her begin to come to terms with her loss.

Andrea Kahre's set  and Kyla Gardiner's lighting worked  well with the arches evoking the Sant'Angelo bridge and  tthe projection of the night sky and day above the Castel.

Griffin describes Via Beatrice as an experimental operetta. Composer Peggy Lee has developed a lot more music than I heard previously. A the reading, much more of the text was spoken and acted out rather than sung.  Although I thought the voices of the three actors complemented each other well, for me some of the original impact of  the two powerful stories was lost in the singing.  To be fair  I must add the caveat that my technical understanding  of composition  is at the Music 101 level. My appreciation can be summarized as "I know what I like and don't like but I don't know why."  So I found  the dissonance of the music uncomfortable and it distanced me somewhat from the characters.

Still I was completely engrossed throughout the hour and a half long performance, and very happy that I had had the chance to see this new Canadian work. Fugue Theatre can justifiably be proud of their achievement.