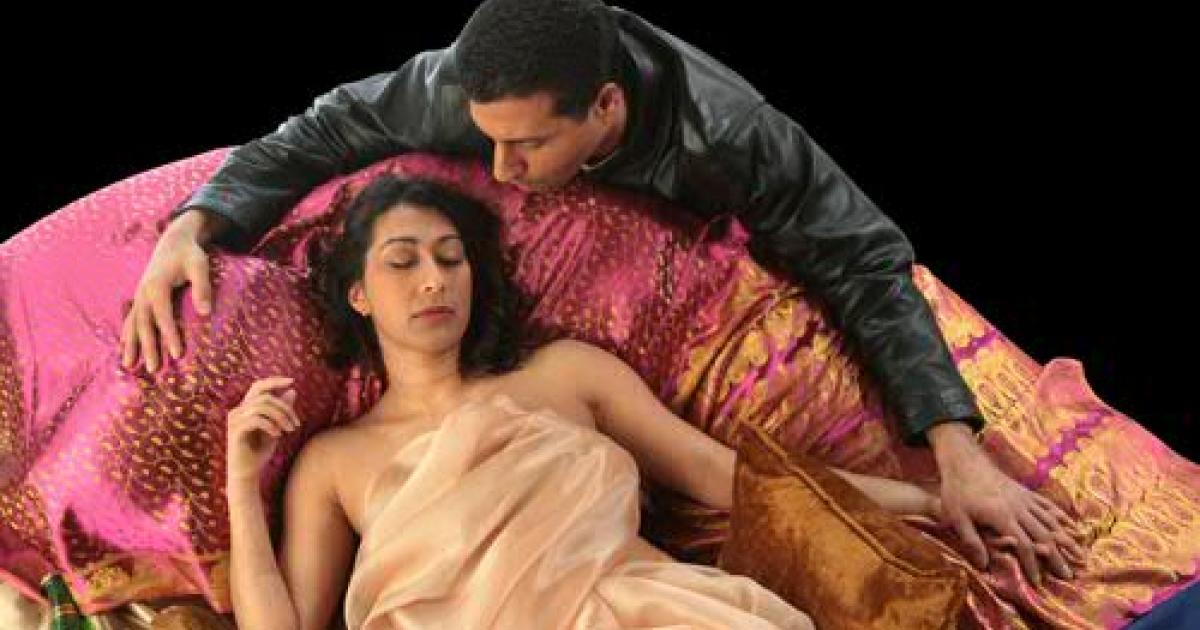 Vancouver, BC: In the course of a recent, somewhat spirited discussion of contemporary theatrical genres, it was suggested that I was rather strongly Aristotelian in my appreciation of drama. That is for me, Mythos (plot), Ethos (character) and Dianoia (thought or theme) always trump Opsis (spectacle). Arabian Nights is the second play this month (the other being The Andersen Project - see Rants, Raves and Reviews May 21st) which kept me musing about the dichotomy of plot versus spectacle.

Arabian Nights is the work of a prolific young German writer, Roland Schimmelpfennig, translated by dramaturge, David Tushingham. The play is a fantastical dance through the haunted dreams of Franziska Dehke (Sasa Brown) and the painful memories of Hans Lomeier (Kevin Williamson). Lomeier, is the caretaker of an apartment complex which mysteriously loses its water supply above the seventh floor, where Dehke and her room-mate, Fatima (Yasmin Abidi) share an apartment. Fatima awaits the arrival of her boyfriend, Kahlil (Craig Veroni) who, nightly, roars up on his moped to visit her, but is never seen by the sleeping Franziska. The fifth member of this odd assortment of characters is Peter Karpati (Peter Wilson) who is drawn into the apartment after spying Franziska in the shower and who ends up mysteriously inside a brandy bottle. An interesting note is that the brandy bottle which makes a dramatic appearance at the conclusion of the play, is the only prop used in this show.

So what about mythos, ethos and dianoia? Well the script certainly held my attention. It presented a series of puzzles which I don't think I actually worked out, so I came away with more questions than answers. How did the other characters relate to Franziska's dream? Who was the roommate? - holder of the keys? What did Lomeier's memories of his carping wife have to do with the events? What was the metaphor of the guy in the bottle? But the Arabian Nights were supposed to be fairy tales. Maybe I am being too literal. Anyway this was one script that I wish I had read before seeing the play. Or maybe I should just go and see it again.

I was also struck by the stylized character of the text. The once "avant-garde" use of poetic, rhythmic repetitive lines, directly addressed to the audience, seems to have now become the norm in new plays. I guess it's a move to "tell don't show." Only for me the effect is somewhat "haven't I heard this before?"

So to opsis. Regardless of my confusion about storyline and my sense of having heard this script before, I enjoyed the staging by Surjik and Specht that evoked the dreamlike quality of the action. Through versatile use of the diaphanous curtains that comprised much of the set and the moody atmospheric lighting, Surjik kept his characters moving through the various parts of the complex, while the soundscape enhanced the eastern ambience. So in this case it was the spectacle that held me more than the plot. Like The Andersen Project. Hmmm. perhaps a crack in my Aristotelian view.

I found Arabian Nights an interesting work, but then I am a cryptic puzzle fan. On my to-do list I have made a note. Got to check out my interpretation of this script. Anyway I think this play is worth seeing. Perhaps you can figure out the puzzles.