A Taste of the South Okanagan

A Taste of the South Okanagan

Tuesday - Off to Naramata for Wine and Food

Grey clouds heavy with rain loomed over Vancouver as we settled into the car but the weather forecast for the South Okanagan promised sunny skies and temperatures of 24 to 26 degrees Celsius. We were headed for the Sandy Beach Resort and Lodge in Naramata, to meet up with friends from Calgary and Thetis Island for a couple of days of winery visits.

All passionate about food and wine, especially wine, the 12 members of our group have travelled together in different combinations on several cooking trips to Italy and elsewhere. I missed the Vancouver Island tour as I was in France, and the last Sicily trip as I was travelling later to Cape Town. So the last time I was together with the gang was over New Year 2006/2007 in Parksville, where "the gals" trounced "the guys" in bocce. Well, maybe not trounced but beaten them by a point or two!

Since the four of us driving together enjoy the intellectual thrust and parry of debate and are unrestrained in voicing our opinions on almost any topic, the five hour drive, with a brief stop in Hope for lunch, passed in a flash. Travelling along the Naramata road, eyes attracted left by the scenic lake view and right by Vineyard name boards, we turned off into Naramata village and spotted the green, white and red of an Italian flag tied to a pole. Our friends Mark and Ruth who had been at The Lodge for a week, were ensuring we found the place.

Check-in was quick and soon we dispersed to our rooms. Two of us were in bed-and- breakfast rooms in the Lodge while the others were booked into cabins. We agreed to meet at Mark and Ruth's cabin for a welcome drink before heading off to dinner. "Look for the giant Italian flag" said Mark. How giant can it be? I thought. Giant it was. See for yourself- it was specially sewn by Ruth.

Many hugs, a couple of appetizers and a glass of wine later, ten of us set off down the lane to the Heritage Inn and Spa to have dinner at  the Cobblestone Wine Bar & Restaurant. Terri and Raymondo, tour organizer extraordinaire, would be joining us the next day to complete our group of twelve.

We were seated outside in the courtyard, the evening comfortable for outdoor dining. Among the wines consumed that evening, two wines from Laughing Stock Vineyard received the most approval and the consensus was that we should fit in a visit there despite our rather crowded schedule.

The warm evening air, the wine and the excellent dinner worked relaxation magic on me and I was quite ready for the stroll back to the Lodge and a good night’s sleep. I left the door to the enclosed verandah open and fell asleep to the sound of waves rippling against the sandy beach.

I have to confess up front that unfashionably I prefer white wines to red and among the white varietals would chose a Riesling, Gewürztraminer or Sauvignon Blanc over a Chardonnay any day. My passion is for Ice Wines and Dessert Wines – they linger better than chocolate on my tongue. So I was eagerly anticipating our first scheduled stop at Wild Goose Vineyards & Winery in Okanagan Falls.

Just as we finished breakfast, Terri and Raymond (alias Raymondo!) arrived, and we all met outside the Lodge where our transport was waiting. Raymond had organized a 14-passenger van, driven by the owner and operator of Okanagan Wine Country Tours, Patricia Tetreau, a delightful and knowledgeable guide. The van worked out really well as we seated ourselves in different configurations after each stop, so conversation flowed back and forth  reminding me somewhat of  an English country dance.

As I walked into the tasting room at Wild Goose I was in seventh heaven. A white board proclaimed their latest awards. My eyes were immediately drawn to three of their wines, the 2007 Gewürztraminer, Riesling and their white wine blend, Autumn Gold, and they were every bit as good as I expected.

I silently berated myself for not having finished my garage cleanup, which has to be done before I can rebuild the wine room that I disassembled before I moved. At the moment my wine storage capacity is somewhat limited.  Still, I left with a couple of bottles of each of the three wines.

With stops at Stag’s Hollow Winery and Blue Mountain Vineyard & Cellars, we sat down to a late lunch at the Toasted Oak Wine Bar & Grill in Oliver. While more wine was consumed by those with a greater tolerance for mid-day alcohol than I have, I sipped slowly and enjoyed my chance to chat to Patti, and find out more about her Tour company, and the local wine country.

At Jackson-Triggs Okanagan Estate we learned about the three tiers of wines that they produce. I could not resist picking up a couple of bottles of their Grand Reserve White Meritage, a blend of 80% Sauvignon Blanc and 20% Semillon.

Arriving at Fairview Cellars Estate Winery, Oliver, we were entertained by owner, Bill Eggert.  By this time I felt I had consumed more wine in a day than I would normally drink in a month. Fortunately Fairview produces “big reds” and so I was able to resist the temptation to taste. Quite the showman and raconteur, Bill was wandering between tables pouring the next tasting when he stopped and said ”someone is chewing gum- I can smell it. How can you taste the wine through the flavour of the gum?”  I looked at my friend. For a moment I think we were both thinking the man must have an unbelievable sense of smell.  But later when I got home I realized that she was seated facing him as he told us about the wines, and even the slightest chewing motion would be visible. Hmmm…

Anyway we got a chance to ask about why netting seemed to be sporadically used in various parts of the vineyards we had seen - to protect against starlings and robins that seem to favour some areas over others – we also got a brief commentary about cutworms in spring, and leaf hoppers.

When Patti dropped us off at the Lodge a few of us wondered into Naramata to pick up deli supplies and bread for a light supper. We agreed to convene at Bill and Catherine’s cabin at 7:30. We all arrived with bottle selections from the wines we had purchased that day so we had an evening of eclectic wine tasting to accompany the cheeses, meats and fruit.

I wandered into the breakfast area of the Lodge just as Jules, artisan baker of muffins and other good things, was bringing out the breakfast food, so I had a chance to chat with her. The day’s featured item was a smoked ham and sun-dried tomato strata or Italian baked bread dish, and the muffins were pear and blackberry.

By 9.15 am we gathered outside where Patti was waiting with the van to take us to our appointment at Mission Hill Family Estate Winery in Westbank for a “VIP tour and wine tasting” followed by lunch at the Terrace of Mission Hill. Ingo Grady, the winemaker, was not available as originally planned but our host, Mike, was a knowledgeable and affable substitute.

It was been several years since I visited Mission Hill and I was impressed by the elegant simplicity of the architecture. We were escorted into the VIP tasting room, beautifully laid out with customized tasting sheets. I looked at the array of glasses and wondered about my taste buds. Can your tongue get a hangover?

Mike answered questions as we tasted the 2007 Five Vineyards Sauvignon Blanc and then the 2006 SLC Chardonnay. He told us that the weather this year having been cool and rainy, the harvest was going to be 8 or 9 days delayed throughout the valley.

We wandered glasses in hand out into the demonstration vineyard where he described how green harvesting is used, to strip off one in three bunches exposing the rest to more sunlight and water. We then toured the wine cellar and visited the Chagall room, dominated by a tapestry woven in Paris from the design of a Chagall work.

We returned to the tasting room – and tasted the 2007 Riesling Ice wine.  I was in ecstasy, in a honey and golden apricot trance.

On that note we thanked Mike and walked over to the Terrace for lunch, which was delicious and beautifully presented.

As we were leaving I ignored the thought of no cellar space and after a quick visit to the store, came back to the van holding two Ice Wines  close to my heart.

On the way back to Naramata we visited Little Straw Winery where I acquired a bottle of their Auxerrois Ice Wine. We been scheduled to visit a couple of other wineries but we had dinner booked at Amante Bistro in Penticton and most of us wanted some rest before the evening.

On the way back we stopped off at Laughing Stock but were disappointed to find that they were out of the wines we were interested in. Love their labels.

Dinner at Amante began with a surprise offering of Champagne or Spumante, that Jan had arranged in honor of Michael’s birthday. The starter platters were tasty and plentiful. My lamb chop entrée was perfectly cooked to my taste. I could not handle a dessert of my own but enjoyed a taste from my neighbour.

The previous evening the women had unanimously declared that they were all “wined” out and wanted a quiet relaxing day, reading, walking and hitting the hot tub and pool. So that is what we did.

In the evening we had planned to have a cook-in but as no one really wanted to exert any effort, we elected to order pizza from the village pizzeria. On the basis of their vast expertise in surveys and research, Peter and Mark were appointed to survey the group and decide on the selection of pizzas. By the time we all convened to hear and comment on the survey results, I at least was nearly hysterical with laughter. Anyway we ended up with about 6 different varieties – something to almost please every palate! For those select few who love salt a lot, anchovies were on the side!.

Saturday
We packed our bottles of wine carefully in to the car for the ride back to Vancouver. The highlights of this very short visit for me were the white wines of Wild Goose, the Ice Wine and the Terrace lunch at Mission Hill and dinner at Amante Bistro. My closing thought is that next time I will have to get my wine metabolizing enzymes in shape before I go. 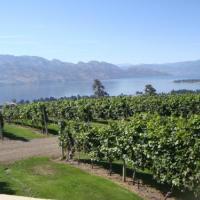 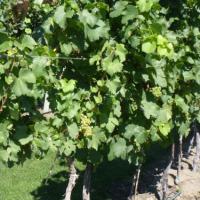 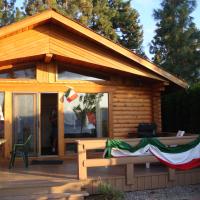 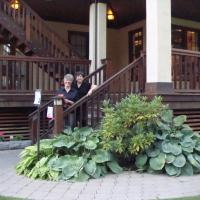 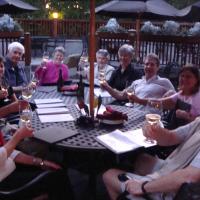 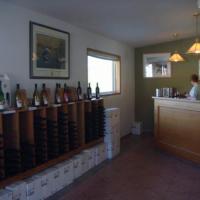 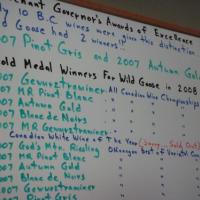 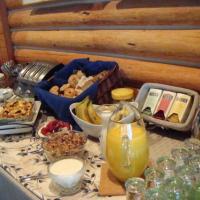 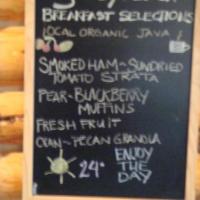 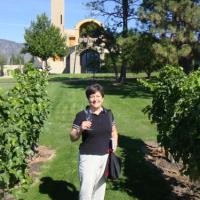 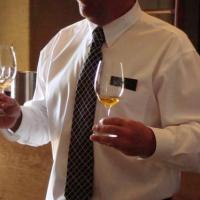 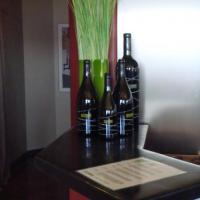