Supping in Vancouver: Plan B Lounge and Eatery

Supping in Vancouver: Plan B Lounge and Eatery

As we were going to see a new play at the Firehall Arts Centre on East Cordova, I decided this time, that I would chose a restaurant closer to home for pre-show dining, and we would then drive over to the theatre.

Plan B bills itself as a tapas restaurant. I really like that style of dining and thought that it would be perfect for a quick bite. On my on-line reservation form where there is a space for special requests for the Maitre' d,  I added a note to say we needed to leave by 7:15. Our reservation was for 6 pm, a little ahead of the rush, and that would give us an hour and a quarter.

After a brief wait while a table of eight was being seated, we were directed to a table next to them, against the window looking out onto Homer Street. We were given a menus for  a fixed price dinner - I had forgotten that a "Taste of Yaletown" was on - silly me. Anyway my companion decided to go with the set menu. He chose the salad (golden and red beets with goat cheese),  the sable fish entree, and a chestnut crème brûlee - excellent value at  $25.00. He raved about the flavour, especially the crème brûlee. I tasted a spoonful and it was truly delicious. I had a glass of the 2007 Thornhaven Gewürtztraminer- another excellent BC wine.

To my disappointment, because of the "Taste of Yaletown"  they were not featuring their usual tapas menu. A three course meal was  a bit more than I wanted.  But one of the servers produced the bar snack menu. I decided to try the cheese plate and the charcuterie plate . The former featured a pork pate, prosciutto and serrano, which I think is the Spanish version of prosciutto.  It came with two kinds of mustard, thinly sliced pickeld cucumber and a little dish of olives which I promptly handed over to my companion. I still have not figured out why I love the taste of olive oil and olive tapenade but can't eat whole olives.  The cheese plate had slices of Stilton, Brie and Telaggio, thinly sliced apple and a little pile of a nuts with a wonderful roasted flavour. I should have asked where they got them from. The cheese was served with a large stack of thin toasted raisiny bread.

I thought the food was excellent, beautifuly presented and good value. However the service was a bit chaotic. Possibly this was because the staff were preoccupied with the table next to us. We were not  offered water. And although all the servers, who at various times brought  menus, drinks or food,  were pleasant,. none of them introduced themselves. There seemed to be some minor confusion between the kitchen and the wait staff as a second entree arrived for my companion when we were expecting dessert.  As a result we had to rush to get to the car and get to the theatre on time. I thnk it always works better when one server is responsible for a table. It also adds a more personal touch to the dining experience.

As this constitutes a neighbourhood restaurant for me, I hope to pay a second visit to try their tapas menu when there are no time restrictions and the servers will hopefully be  less frazzled. 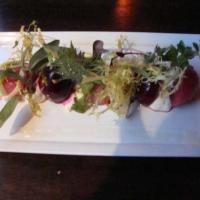 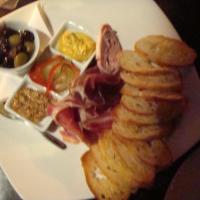 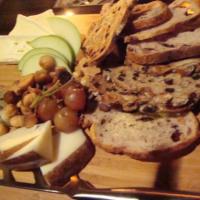