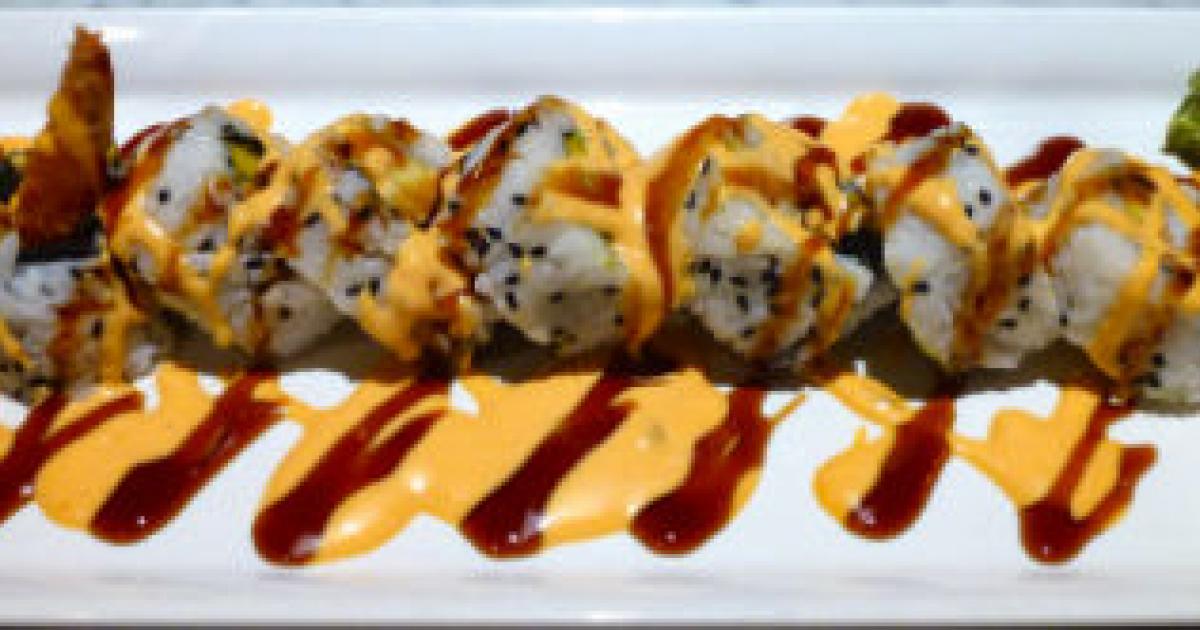 After seeing a film at the Scotiabank Cinemas  we exited the complex to find that rain was pelting down with gusts of wind blasting our umbrellas inside out. We speed-walked a few yards to the corner of Smythe and Hornby to have supper at the Earls restaurant round the corner.

We asked to be seated where it was reasonably quiet and the lighting was  good. The area in the dining room where we sat was excellent. We were not bothered by any booming loud music as  so often happens these days. The light was bright enough so that the menus could be read without the aid of my mini-flashlight, and the food photographs worked well too.

I liked the sound of the dynamite prawn and mango roll - a panko-breaded prawn and mango with avocado, cucumber, unagi maple and sriracha mayonnaise. It was beautifully presented and tasted as good as it looked.

Both of us decided on steak from the Test Kitchen menu, that was described as Alberta-raised Spring Creek Ranch Top Sirloin  served with a signature rub, garlic mashed potatoes and seasonable vegetables. I asked for fries rather than the mashed potatoes, and ordered the steak medium-rare with  bourbon mushroom sauce (with crimini and button mushrooms) on the side. My steak was perfectly cooked, thick, tender and juicy, and the fries irresistible. The sauce was delicious and was not on the side but coating the steak. As it turned out that was better for me as I found the taste of the spicy rub too peppery, even through the masking of the sauce.

My friend ordered steak cooked medium, with no sauce, and substituted a salad for the potatoes. Unfortunately her steak was thin, dry and so peppery that she barely ate a mouthful and instead filled up on the salad which she enjoyed. When the staff realized that the steak was barely touched, they handed the situation well. My friend declined the offer of an alternate serving, and was not charged for the steak.

As I had had the  appetizer, my friend decided to order dessert. Her pick was the  chocolate sticky toffee pudding; a warm chocolate cake with chocolate and toffee sauces and vanilla bean gelato in a candy snap basket. I don't usually eat desserts, being more savoury than sweet toothed. But after I tasted a spoon of the to-die-for chocolate cake, I succumbed with little further arm twisting and helped her finish the lot.

Warm, dry and relaxed from a pleasant meal , we and our umbrellas went out into the stormy night for a brisk walk home, still drooling over the sticky toffee pudding.

From our helpful server and two of his equally pleasant colleagues I  learned a little more about the upper floor of the restaurant that was opened as a Test Kitchen about four months ago,  to develop new dishes for the nationwide Earls restaurants. I'm curious to find out more about how its working. Watch this space. 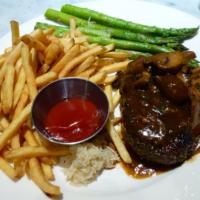 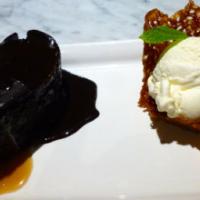